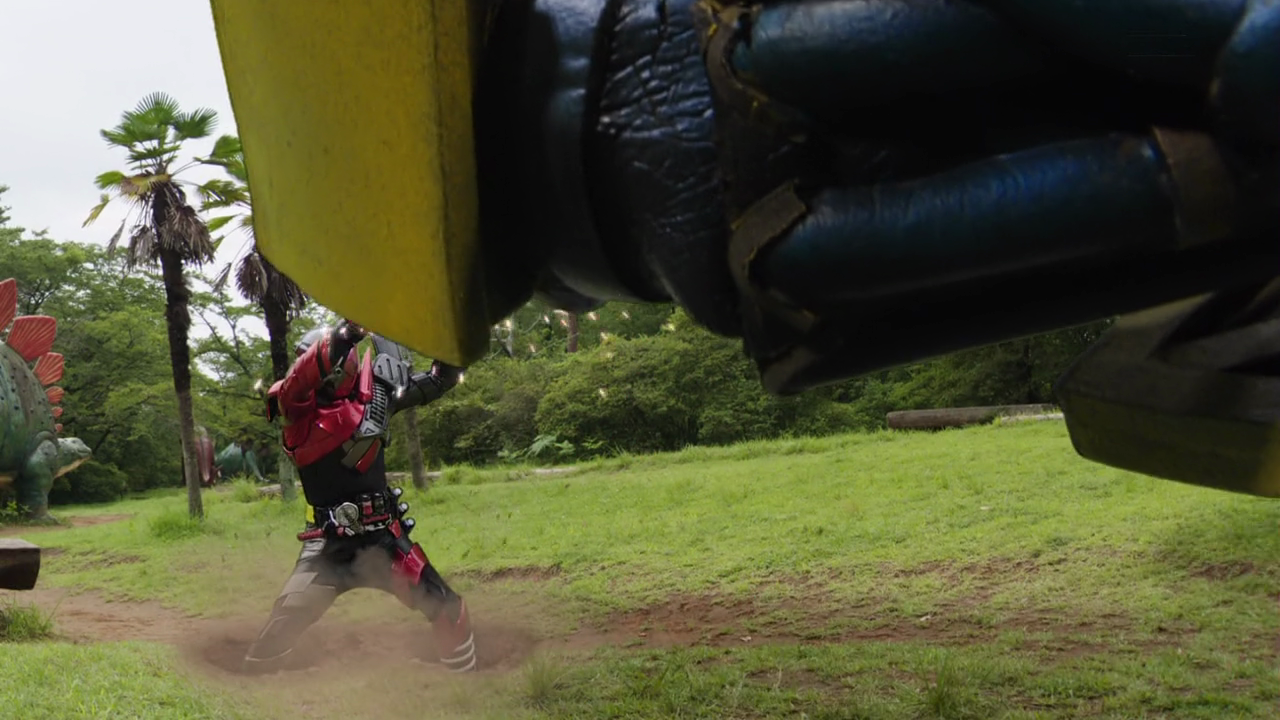 Build has certainly made an impression in the tokusatsu world so let’s take a look at the latest episode. The episode opens with a quick recap of the first 3 episode as told by Sento and Ryuuga. After the recap, the episode opens with Sento remembering some more about his time being experimented on by Faust but this time he sees the Pandora Box.

Suddenly, he is woken up by Soichi who informs our hero that he found him almost dying in the warehouse and that it was almost too late to save him. How did Soichi know where to find Sento and why didn’t he run into Blood Stark? After Misora makes a new Full Bottle, Sento asks her to once again employ her internet followers in finding any information on the Skywall incident. Let’s she what her fanbase brings forward…

After the opening song and credits, we are shown a little more of Faust. Nabeshima is turned into a new SMASH monster and attacks Night Rogue, who easily stops the new monster in its tracks and explains more about the mysterious group’s full intentions: making the most powerful lifeforms.

Elsewhere, Sento asks Gentoku about what really happened during the ceremony that started off the Skywall incident. Gentoku reluctantly admits that two panels from the Pandora Box have been stolen but doesn’t want the public to know about it. Meanwhile, Ryuuga and Sawa have made it to Seito in an effort to save Nabeshima’s family. After locating Nabeshima’s wife and daughter, they try to smuggle them back to Touto via the boat they arrived on. All of a sudden, they are attack by a self-destructing Faust Guardians and almost blown up before making it onto the boat.

Back in Touto, Sento questions Soichi, but only gets the most vague of answers. What is Soichi hiding from our hero? Misora arrives to tell Sento a Smash has appeared but the tip they receive is very weird, it talks about experiments and essences; what could all this mean?

Sento quickly dispatches to the scene and confronts the box based SMASH, transforming into Build. He seems to be winning until Blood Stark shoots the SMASH with some kind of steam attack that makes SMASH grow. According to Stark, this is a new gas treatment and even of the subject survives, they will encounter side effects. Just as the SMASH is about the finish Build off, Ryuuga appears and throws the Drill Crusher to intervene. Build attacks the SMASH as HawkGatling and uses his final attack. Upon clearing the SMASH, our team find out that is is in fact Nabeshima, so they bring him to the hideout to try and get some answers.

After asking Nabeshima some questions, it become apparent that he is suffering from amnesia and doesn’t remember anything, not even his own family. Sento quickly steps in and calms the everyone down by telling Nabeshima and his family to focus on making new memories together, rather than dwelling on the lost ones. As everything is calming down, Nabeshima sees the Full Bottles on the wall and comments that Faust has some bottles just like these. Why would Faust have Full Bottles?

We cut to the Faust HQ where we see Night Rogue turning over a Pandora Box plate and placing a Full Bottle onto it.Rogue questions Stark about why he didn’t kill Build but all Stark can say is everything is going to plan. Back in Build’s basement, Sento begins to put it all together and, despite Soichi’s objection, hammers away at the wall panel he uses to find Best Matches to discover that it is a Pandora Box plate. Why is a Pandora Box panel here and who is Soichi really working for?

Personally, I feel this episode brought a lot of questions to the table but I really find myself drawn into the the story. I can’t wait to see all the answers come together and to see how this effects all the characters in question.

What were your thoughts on episode 4? Who is your favourite character so far? Let us know in the comment section below!