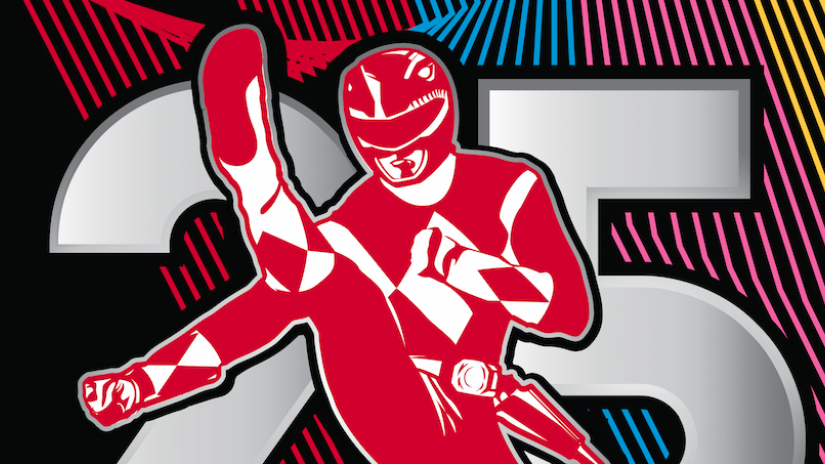 In conjunction with their announcement at today’s Licensing Expo, Saban Brands sent out the following press release detailing the early plans for their 25th Anniversary celebration.

In addition to the reveal of the Power Rangers 25th anniversary logo, Saban Brands shared a sneak peek into the celebratory year, which will include, but not be limited to, the following:

• A special 25th anniversary episode will air on Nickelodeon during the “Power Rangers Super Ninja Steel” season in Summer 2018.
• A highly anticipated national live tour in partnership with Red Light Management and Creative Artists Agency (CAA) will be an epic, one-of-a-kind and interactive theatre production. More details, along with pre-sale tickets, will be announced in early October.
• Power Rangers will soon be the first licensed property with an official interactive role playing game streaming live on Hyper RPG, an industry leading channel on Twitch, the world’s leading social video platform and community.
• Interactive experiences with new, game-changing brand partners to create Power Rangers escape rooms and virtual reality centers as well as learning and physical development opportunities for kids and much more.
• The unveiling of the “Top 25 for the 25th” collection which will feature must-have, official anniversary items for collectors of all ages from notable partners including toy partner Bandai, the chart-topping mobile game Power Rangers: Legacy Wars from nWay and record-breaking Power Rangers comics from BOOM! Studios, amongst others.

“At its premiere in 1993, the ‘Mighty Morphin Power Rangers’ resonated with people around the world, turning it into a global pop culture phenomenon,” said Janet Hsu, CEO at Saban Brands. “Since then, the Power Rangers TV series has continued to exemplify teamwork and inclusivity which is something we are extremely proud of and will be showcasing throughout our 25th anniversary year as we look to celebrate this historic milestone with fans of all ages.”

Created by Haim Saban and launched in 1993, Power Rangers is one of the most-watched television programs in the United States and remains one of the top-rated and longest running kids live-action series in television history. The series and subsequent movies, including 2017’s feature film with Lionsgate, follows the adventures of a group of ordinary teens who morph into superheroes and save the world from evil. The TV show airs in 150 markets around the world and is translated into numerous languages. As a top ranked action brand for decades with more than 150 licensees globally, Saban Brands will work closely with its valued partners to honor this incredible landmark for the franchise.

The press release also included the full logo for Power Rangers 25, seen below:

Are you excited for the 25th Anniversary? What do you think of the first announcements? Join the discussion in the comment section below or on Toku Toy Store’s Facebook and Twitter pages!