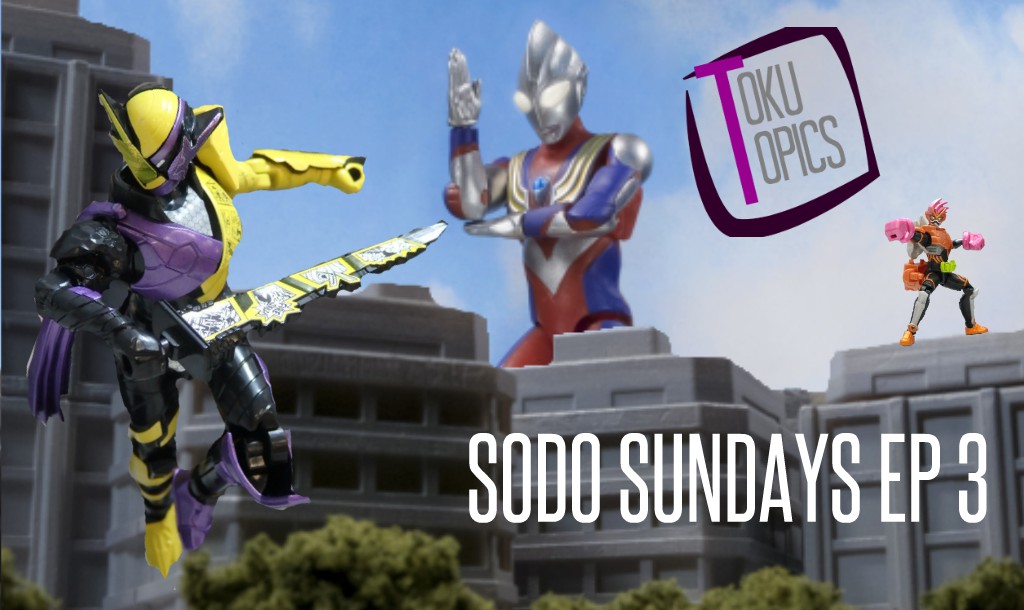 Hello, tokusatsu community! Joshua Perry here to talk about SODO figures on my biweekly series, SODO Sundays. This week we have news from Kamen Rider Build, Kamen Rider Ex-Aid, and the Ultraman franchise.

Last week, Bandai revealed the lineup for SODO Set 2, due out at the end of October. The final figures revealed for this set were two more Best Matches for Build. His newest form NinninComic was shown off first; this figure comes with the Ninja half, the Comic half, a stand, and his weapon the 4 Koma Ninpoutou.

Bandai also revealed Build’s next Best Match: RocketPanda! This figure comes with the Rocket half, the Panda half, and a stand. RocketPanda also comes with the Steam Blade weapon for Night Rogue and Blood Stalk. To give both of them the blade, you’ll have to buy two of RocketPanda, sadly.

Of course, as with all SODO Build figures, the Ninja, Comic, Rocket, and Panda halves can be mixed and matched with all the other halves already released to get all of Build’s Trial Forms.

The full line up for SODO Build Set 2:

When it comes to Blood Stalk, his figure was just revealed last night as the first figure in Set 3, due out in November. Stalk comes with the sticker for his stand (stand sold in other sets) and the Transteam Gun. The gun is cast in red plastic this time, probably to cut down on costs a bit.

A final note for Set 3 is that Bandai said to make sure you have the Vacuum and Hedgehog pieces for this set, basically confirming that Fire Truck and Lion will be released in Set 3 to complete those Best Matches.

A few weeks ago, it was announced that Ex-Aid’s new form, featured in the upcoming Kamen Rider Para-DX Hyper Battle DVD, was getting a SODO figure release in the Kamen Rider Ex-Aid Super Complete Special Edition Hyper Muteki Box in December. Pictures for this figure have finally been revealed. The figure looks great, using all repainted parts from other Ex-Aid SODO figures it captures the look of Double Fighter Gamer Level 39 perfectly.

Finally, two new SHODO Ultraman VS. sets have had some pictures revealed. VS. Set 4 features the figures of the original Ultraman, Ultraman Tiga, Red King, and Alien Balton. This set releases in December.

In January 2018, the next Ultraman VS. set will be released. VS. Set 5 will include the current Ultraman, Ultraman Geed, as well as Ultraman Leo, Astra, and Magma Star. Set 5 also includes some effect parts of buildings and attacks to create great display pieces. The building pieces would also be great for the Super Sentai Minipla robo series.

Of course, SODO Build Set 2-3 as well as Ultraman VS. Sets 4-5 will be available at TokuToyStore.com!

You can watch my full SODO Sunday video below:

That’s it for this edition of SODO Sundays! The next edition will be on Sunday October 22nd on both Toku Toy Store News and YouTube channel. For constant updates on the SODO/SHODO line go check out the @SODOFountain Twitter page.

Will you be picking up these figures? What figures do you want Bandai to make next? Leave a comment down below!