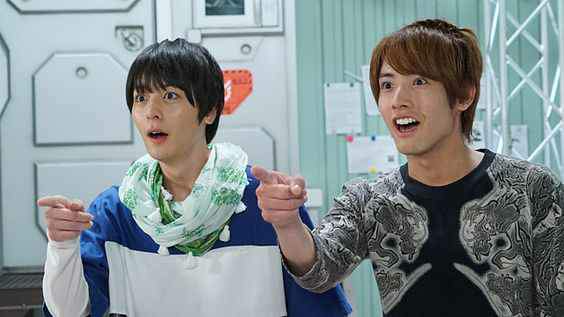 So last week we found out more on Sento’s past as well as the fact he could’ve been the one who murdered Katsuragi and framed Banjou. We didn’t get to see any new forms last week but we do get PandaRocket this week.
So following on from last week’s rather shocking discoveries we see Banjou and Sento back at the lab with Banjou asking Sento if he murdered Katsuragi, which he’s asked 328 times so far. We then have Sento explaining that Katsuragi could’ve been dead when he arrived but isn’t sure as he can’t remember with Banjou continuing to blame Sento for the murder again when Owner suggests they look into Katsuragi.

Next we see Sento at the lad doing some investigating into Katsuragi and he reads Katsuragi’s research data and daily log when he notices it ends a month before Katsuragi was fired for trying to use Nebula Gas on humans. We then see Sento back at the cafe talking to the gang when he says about using an anagram to work out Katsuragi’s last update which didn’t make sense at first. He comes to the conclusion that he needs to go see Katsuragi’s mother, who lives in Hokuto, to hopefully work out what happened.

We then get Sawa explaining that there is gaps in the Sky Wall called Sky Road, some of which connect to Hokuto but have a cost attached to get through. We then see Sento and Banjou the clown meet with a Broker in order to get through the Sky Road.

Following that, we see Gentoku talking to Blood Stark about Sento going to Hokuto when we discover that Gentoku wants to make Kamen Riders for the military and that he is Night Rogue. After that we get Sento and Banjou the clown traveling to the Sky Road when they bump into some other people trying to get through just before an ambush by Faust and Night Rogue who are looking for Build. We then get a fight between Build and Night Rogue while Banjou saves the civilians.

After that we see Sento and Banjou the clown in Hokuto at a temple looking for Katsuragi’s mother when kids notice Banjou the clown and get told to leave but her.  Later on we see Sento and Banjou sitting on a bridge when three of the kids show up and start talking to Sento about Katsuragi’s mother when she shows up and tells the kids to go home. Sento then explains to her that Banjou the clown didn’t murder her son and that it could’ve been Sento. We then see Blood Stark attacking the kids when he turns one named Takehiko into a SMASH. Sento then turns into NinninComic and manages to defeat the SMASH.

After being changed back, we see Banjou have a moment with Takehiko while Build transforms into PandaGattling when Blood Stark uses the Rocket FullBottle in an attack against Build, changing him back to Sento. Banjou and his Dragon then join the fight and Banjou manages to throw the Rocket FullBottle to Sento who makes a Best Match with PandaRocket called RocketPanda which he uses to fight Blood Stark and win against him.

So what did you guys think of this week’s episode? Did you guess that Katsuragi Takumi founded Faust? Did you feel the Night Rogue reveal was a little obvious?