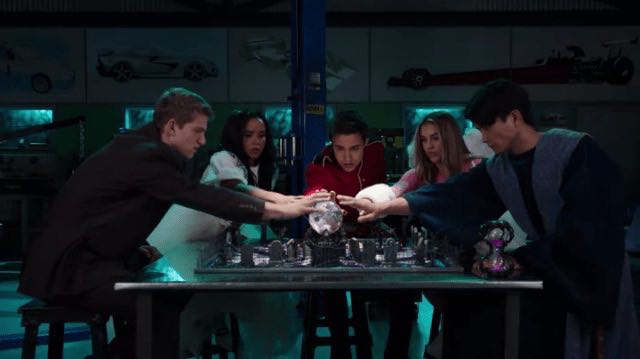 Ah yes, Halloween. When this spooky season comes around, we can be certain of 3 things; pumpkins, small children trying to rob you of your sweets and a big celebration from Power Rangers. You know the drill, a new PSA about how to not overdose on potentially poisoned unwrapped fun-size Dairy Milk bars (as we all do) and a halloween special. I don’t usually have high expectations for Ranger halloween specials since they don’t usually bring much to the story, even in seasons I usually really like. But this year, I was quite impressed. This halloween special was a really entertaining watch and it’s not something that would seem out of place in the rest of the season.
The episode begins with the Rangers listening to Levi sing when they receive a mysterious board game. The Rangers go off to play it but Levi doesn’t want to come, because he doesn’t like board games. Levi isn’t that great of a character (I don’t need to remind you how Brody never got his burger in EP8) so him doing something like this isn’t a surprise to me but they kinda made it a big deal near the end. If they did this with a character like Brody, where it would be unusual for them to refuse something like this, it would come across as more mean. But I expect Levi to be a bit rude, making the lesson of the episode less relatable.

The rest of the rangers go off to play the board game when it is revealed that it’s actually haunted. So Cosmo is controlling the game and broadcasting it as a Galaxy Warriors halloween special. That’s actually a really good idea, considering Ninja Steel revolves around another TV show it would make sense to have a halloween special in a halloween special. Also, Cosmo is a main focus of the episode. I actually really like Cosmo. Whereas Galvanax just felt like a discount Sledge, Cosmo’s charisma brought something new to the series that we haven’t really seen in awhile. It’s a shame he hasn’t really had much development (hence why I didn’t talk about him much when I did the EP1-12 recap), something which they actually gave a bit of to him in this episode.

The object of the game is that the Rangers have to get to the end before the time runs out, every space represents a monster they previously fought and they have to fight them again when they land on their space. If the Rangers succeed in defending the monster, they get to roll the dice again. If they fail, the next monster gets a power up or the Rangers get a disadvantage. If the time runs out before the rangers get to the end, they have to give up their power stars. The Rangers aren’t allowed to leave the game or get any outside help. Overall, a pretty cool concept, having to re-defeat past monsters is an Idea that I like a lot and I wish it was done more often. The first monster they face is Trapsaw. Although the episode he was from is pretty good, he was pretty useless throughout it. I don’t know why they didn’t just use Ripperat, especially since we literally never see him placing any traps at all. It goes without saying that they defeated him quickly. The next monster was Hacktrack. But, instead of defeating him normally, Sarah used a really conveniently placed toolbox to create a device to stop Hacktrack’s hacking abilities. Considering that he was really hard to defeat originally, it makes sense that the Rangers chose a different way of defeating him. The next monster is Slogre. While the Rangers come close to defeating him, they get caught in the slow mist and lose the round, meaning they get a disadvantage in the next one. In this case, the Ranger that rolls the dice on the next turn has to face the monster alone. In this case, it’s Calvin facing off against Spinferno. Spinferno takes control of a truck, with the driver still inside, and drives it towards a cliff. To win the round, Calvin has to save the driver from falling. While he succeeds in saving the driver, he falls down the cliff and loses the round. As punishment for losing, the Rangers have to face a Skullgator and a brainwashed version of the Robo Rider Zord.

When Levi (finally) realises that he was being a bit mean for having the Rangers do something that he enjoys while not joining in with something they enjoy, he goes to find the rest of the Rangers so he can join in their game. When the Levi finds out that the Rangers are in trouble, he goes to help them. Cosmo tries to stop Levi by claiming that he’s breaking the rules, but since he isn’t playing he doesn’t have to follow the rules. Levi uses his Zord star to free the Robo Rider Zord and form the Fusionzord to defeat the Skullgator. He then destroys the hourglass controlling the game time, freeing the Rangers.

Despite my minor complaints and Levi being Levi, I really enjoyed this episode. It was cool seeing some of the season’s best villains and Trapsaw fighting the Rangers one more time and it’s nice to see Cosmo get more screentime. As I said in the recap, the show is definitely improving and this episode is proof.

What do you think of this episode or of halloween specials in general? Let us know in the comments and have a happy halloween!