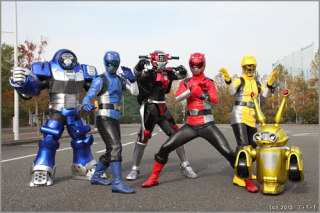 In 2015 Saban aired “Power Rangers Dino Charge”, an adaptation of “Zyuden Sentai Kyoryuger”. This breaks the tradition of adapting every Sentai series one by one since they never adapted the series before Kyoryuger, “Tokumei Sentai Go-Busters”. Although Bandai America and Saban have said in the past that they wanted to do something with the series, it has now been five years since it first aired in Japan, and nothing has been confirmed so far. We that in mind, the skipping of “Ressha Sentai ToQger”, makes it quite obvious that Saban and Bandai are a lot more comfortable with skipping series now.

So, the future of Go-Busters isn’t looking bright. But why didn’t they adapt it in the first place? While we don’t exactly know the reason, fans have speculated on it and have come up with a few conclusions. One of the more likely options is toy sales, Go-Busters only brought in ¥9.6 billion (£64 million as of writing) while Kyoryuger made ¥14 billion (£94 million as of writing). Bandai probably didn’t want to risk losing money, since toys that don’t sell well in Japan usually don’t sell well in the west. Another reason could be closing the gap between seasons, considering that there was a 3 year gap between Gokaiger and Super Megaforce (The biggest in Power Rangers history), and if the the gap kept increasing at the rate it was, there would be a 7 year gap between Super Ninja Steel and Ninninger. It’s also likely that Saban wanted Dino Charge out at this time because of the release of Jurassic World. Naturally, a movie as big as this one would really boost the popularity of dinosaurs as a whole. Dino Charge was just the overall better option.

So how would Saban have gone about adapting it? The closest thing we have to an actual adaptation is a pitch by writer Amit Bhaumik (You may know him as the person who wrote “Forever Red” as well as other episodes of the series). The season would serve to tie up the continuity of the series and would’ve contained many references and returning characters, auch as the series taking place in Mirinoi and Dr. K would return as a side character. Although the pitch was never used, it’s still interesting to see what could have been. It makes me wonder, if this pitch was used then how would it affect the future seasons? Especially since the season was quite lore heavy. Quite a lot of things in Dino Charge and Ninja Steel would have to be more reliant on the lore. Either way, it’s strange looking at a pitch that never got the greenlight. It’s almost like looking at some sort of alternate universe where this did happen.

Do you think Go-Busters should’ve been adapted? Let us know in the comments!

1 thought on “Why Wasn’t Go-Busters Adapted?”