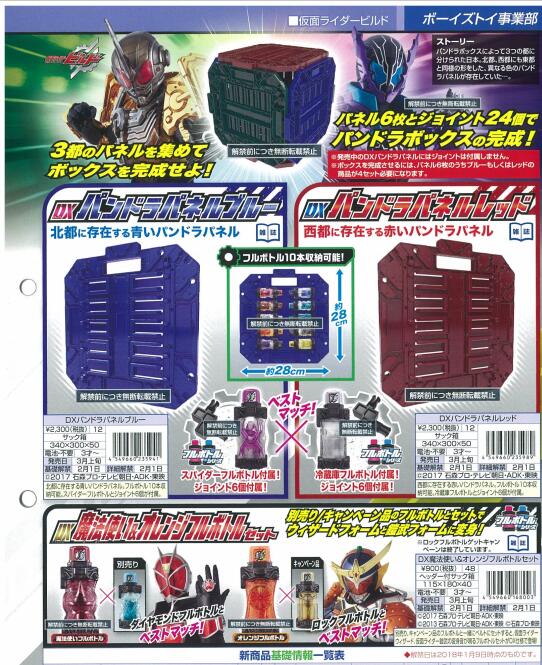 Some additional Kamen Rider Build 3rd Quarter toys have popped up. Though not many they are interesting for the show.

First up are 2 new Pandora Panels. These were just seen in the show as the panels belonging to Houkto and Seito. Included with the Blue Panel is the Spider Full Bottle and included with the Red Panel is the Cooler Full Bottle. These 2 bottles are a Best Match. Both release for 2,300 yen in February. Like the original panel, these can each hold 10 Full Bottles. These ones include special connectors that allow them to be connected to make the Pandora Box, though you would need to buy 2 of each Panel to do so.

Finally, a new Legend Rider Full Bottle set has been revealed featuring DX versions of the Magician and Orange Full Bottles. These 2 were already released in Gashapon and Candy Toy formats but now can be bought DX. Magician with Diamond makes sounds for Kamen Rider Wizard while Orange with Lock makes sounds for Kamen Rider Gaim. Retailing for 900 yen these also release in February.

What do you think of these new toys? Will you buy multiple panels to make the Pandora Box? Leave a comment down below!