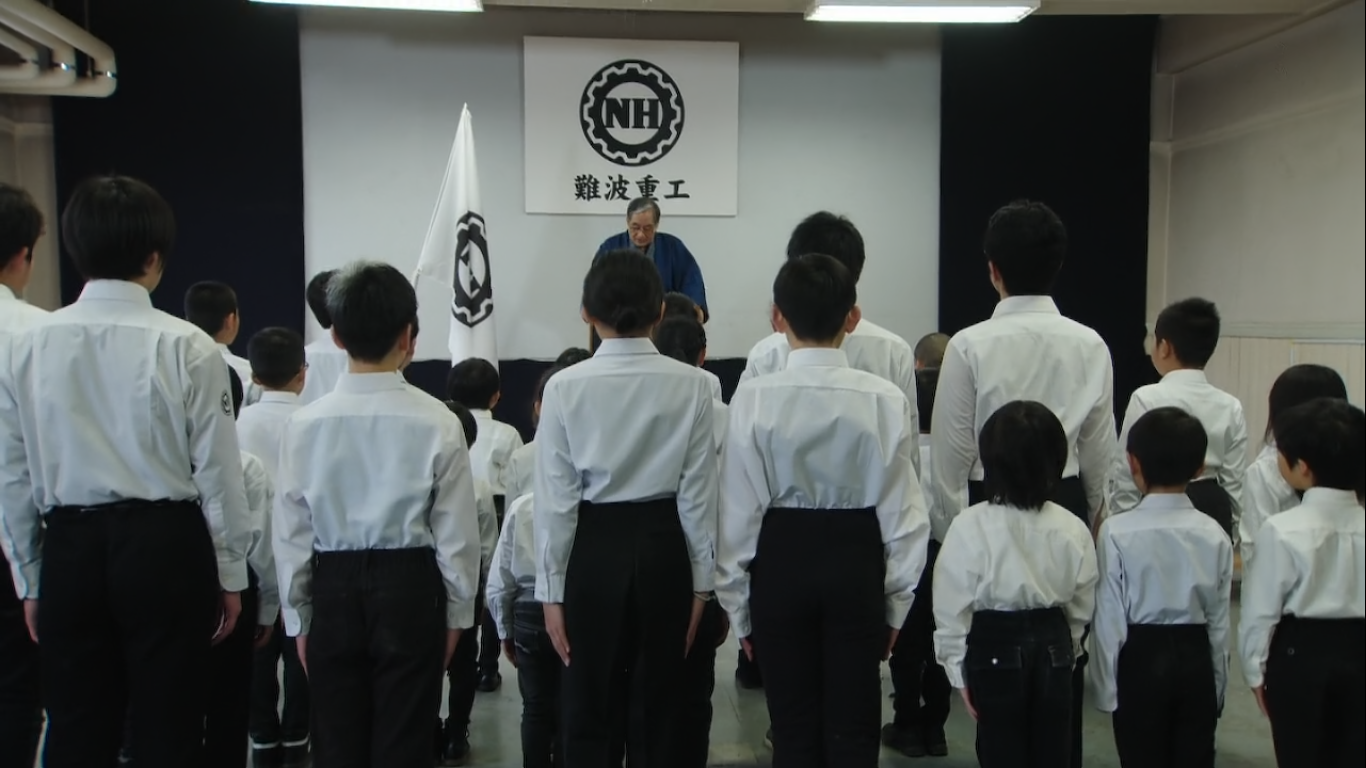 Wow! This was a very packed episode with a lot of great character development. Let’s dive right in!

We open the episode on Misora literally moving sections of the Sky Wall to repel Rogue and the Kaiser system bros before she collapses into a heap once again. She utters a single word as she does so, “Evolt,” which will likely end up becoming a big plot element later on. The Build team takes her back to Cafe Narascia and watches over her, debating about what may have happened. Clearly loathing the idea, Sento realizes he has to go to Blood Stalk for more information.

The next scene cuts to a secret meeting between the chairman of Nanba Heavy Industry and the president of Seito. It’s a brief scene but shows that is still spying for them.
When Sento and Isurugi meet, they discuss Misora, and where her bracelet came from. As it turns out, Misora’s bracelet came from Mars as well, and it had some kind of attraction to her. Isurugi acknowledges that his daughter may very well be the most powerful lifeform on the planet if she can move the Sky Wall.

Isurugi also explains that the Washio brothers (Engine Bros and Remote Control Bros) and Utsumi are agents not of Seito, but of a group under Nanba Heavy Industry called the Nanba Children. The way the group is described, they are presented as a sort of private intelligence network directly reporting to Nanba.

When Misora wakes up, she is fine. She appears confused but otherwise has come to no harm or visible injury, and asks them to discover the cause of what has been happening to her. The team agrees, and we cut to Ryuga helping a soldier for Touto coordinate a move of Pandora’s Box. Here, Chairman Nanba’s true motives are revealed. He tells Utsumi that he wants to have the weapons to win a world war, so that he can “rest atop the military industrial world.”
Sento and Misora begin to go over the bracelet and what happened to her, using a VR headset, wired between Misora’s bracelet and the computer, to project Misora’s thoughts onto a screen. In this way, they discover that what Misora sees when she purifies bottles is possibly the end of Martian civilization, destroyed in fire by the power of Pandora’s Box. Misora confesses she is deeply troubled by these images, and vows to keep fighting as long as she can anyway. In this moment, Sento and Misora have a real bonding experience as he renews his own vow to fight.

Engine Bros and Remote Control Bros are deployed to a factory in Touto to retrieve Pandora’s Box. Grease, hearing the order and alert that they are coming, has a brief exchange with Aka about burying the dog tags for Aoba and Kiba at the base of the Sky Wall. This moment, though small, shows that the characters have been changed and grown from these losses, if only slightly. The Washio brothers arrive, only to be met by Sento and Ryuga, and discover their intel had been falsified. A battle ensues and they begin in earnest. In time they are joined by Kazumi, who jumps eagerly into the fight against the brothers who killed his friend.
The fight doesn’t last long, and when it ends, we cut back to the prime minister’s office in Touto. Sento, Ryuga, and others discuss Sento’s possible theories on who the spy might be within Touto, and Sento takes very little time to point the finger at Mazusawa, the Prime Minister’s aide. Mazusawa confesses to the crime, and says that Rogue will be on his way to the true location of Pandora’s box before long.

He then kills himself using a bottle and declares, “Glory to Nanba Industries!”

As we find out, Pandora’s Box is being guarded by Aka, who is set upon by Gentoku. Aka is killed by Gentoku, while Kazumi, Ryuga, and Sento look on.

Kazumi picks up Aka’s tags off the floor, we see a small sequence of motivational words, Aka’s final farewell, and the three join in the fight to take on Gentoku together. This scene is powerful, especially given how short and sudden the attack is. Kazumi feels the loss heavily, visibly, as the fight continues on.
Even three on one, Gentoku easily outclasses the team. As they try to figure out what to do, they are joined by Misora, who insists on joining in the fight. She is attacked by Gentoku, and Ryuga steps in the way of the shot. It is at this point that Sento gives the warning that he is using the Hazard Trigger. Gentoku takes one hard hit, otherwise watching as Sento loses control and turns on his team, only acting when Ryuga turns his attention to Gentoku himself. After knocking Ryuga back with a finishing attack, Gentoku takes Pandora’s Box and makes his escape.
Sento, still in his berserk status, now turns on Misora, and begins to radiate some kind of black smoke. As he does, a transfer of energy occurs between Misora’s bracelet and Sento. One of the antennae on his helmet glows as the black smoke swirls around him.

The preview for the next episode sets up a new proxy battle against Seito, which will likely take us through the next few episodes.

What did you guys think of this week’s episode? Leave a comment down below!