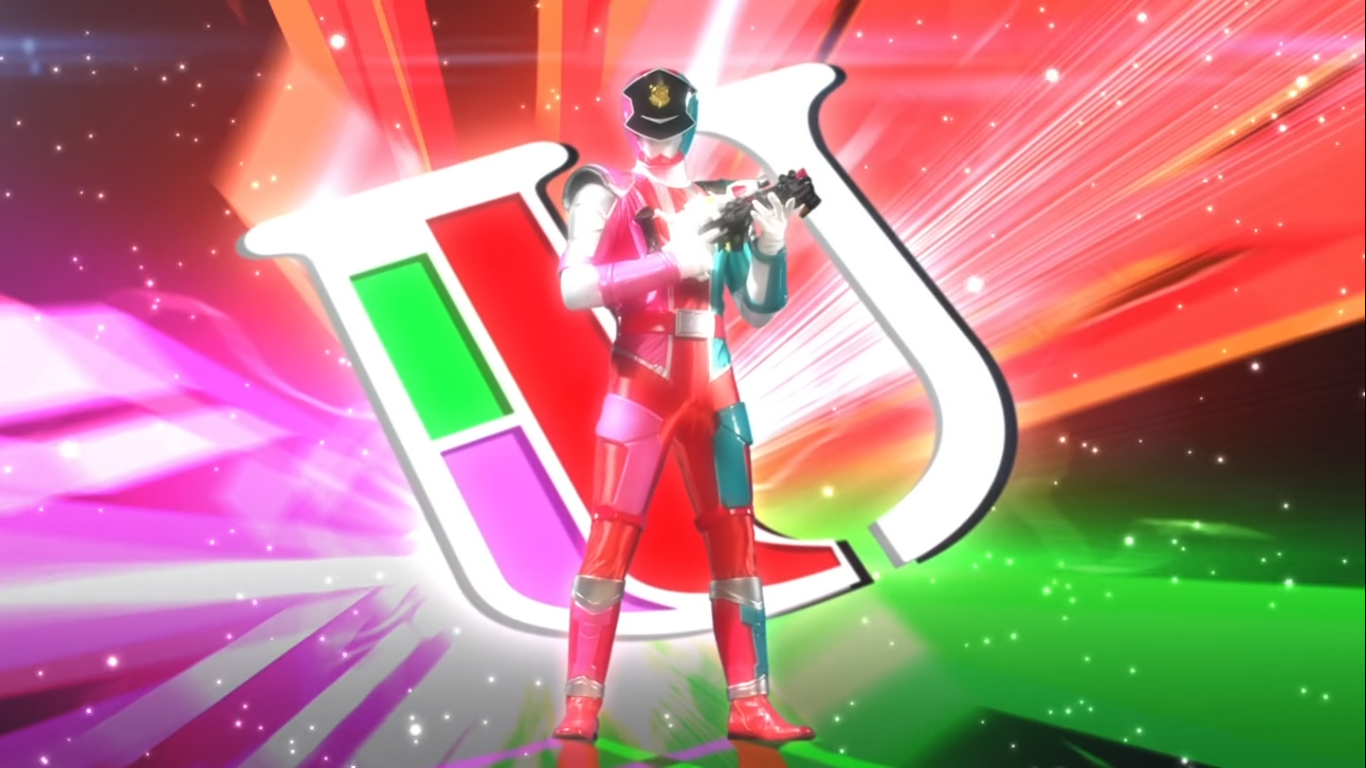 In this episode: Teamwork? Sharks in schoolgirl outfits, and the return of weird fusion.

We open the episode on the Patorangers investigating a series of missing persons cases, and Tsukasa tells the story of how she and Keiichiro met.

They enter a recent crime scene, the home of a missing child whose parents were home the entire time, and begin to search for clues. As Tsukasa lingers on something belonging to the little girl, Keiichiro blames the Ganglers for the disappearance. This scene does a bit to set up that Tsukasa will be the focus of the episode, as will finding the missing girl.

The pattern they discover is that the majority of victims are women. As they discuss this, Tsukasa stops them suddenly to examine a truck selling plush shark toys. She notes that the girl whose room they’d been in previously owned one similar, and before they can question the person much further, the Lupinrangers appear and reveal the person running the truck to be a Gangler (who also has a shark motif).

A playing card thrown by Kairi cuts the Gangler’s face, forcing it to change into the monster form it truly has, and the Lupinrangers begin the battle. As they dive in, the Patorangers henshin and join in as well. Tsukasa has to be the one to hold Keiichiro back from his normal shoot first and ask questions later method. His itchy trigger finger and Tsukasa’s need to stop him gives the Gangler an opening to get away. Before leaving, Umika tells the Patorangers that the Gangler’s Lupin Collection item turns people into decorations.

The lead Ganglers have a brief exchange about their next move. Back in the cafe, the Lupinrangers discuss their situation, with Kairi questioning why Umika would give the Patorangers information. They admit they still know nothing, and we cut to the Patorangers tracking the shark plushies seen earlier. The Lupinrangers stealthily watch on, and eventually one of the toys is taken back to GSPO headquarters for analysis. Jim finds nothing unusual, and Commander Hilltop encourages it to take a break. Left alone with the toy shark, Tsukasa looks on, and it is revealed she is drawn to the cuteness of the item. She fantasizes about taking it home and hugging it tight, lamenting that the item is evidence. For a moment, she picks it up. She hugs it, then disappears.

We next see Tsukasa in a cell in cave, surrounded by the missing people they have been searching for. The girl who was the focus of the initial search is shown, and Tsukasa puts it together that touching her face to the toy made her vanish. The other Patorangers inquire as to her disappearance, while she breaks the missing people out of the cell using the weapon mode of her VS changer. She is met by the Gangler seen earlier, and is attacked immediately.

Left without her VS changer, she is twisted until the Gangler is able to break her arm at the shoulder. Before this can happen, the other two Patorangers arrive and rescue her, leading to a triple henshin, starting with her. The countdown progresses as normal. We cut away from the battle, to Umika sitting by herself in the cafe. She hears the radio report of the missing people reappearing, and calls the others at once. They track down the Patorangers and join the fight, in the hopes of stealing the Gangler’s Lupin Collection piece. We see an exchange of fire turn into a brief tag team between Sakuya and Touma, as well as various cutaway shots between Umika and Tsukasa.

Umika makes her move to unlock the Gangler’s safe, with Tsukasa’s help. Tsukasa tells her partners that “My hand slipped,” when trying to explain the shot that allowed Umika to open the safe.

It is definitely an interesting choice that the cooperation between the two teams begins with the female members, casting them into a leading role in the plot that is relatively new in Sentai. Good Striker joins in, attaching itself to Keiichiro’s VS Changer for the finishing strike.

Par for the course, Gauche appears and revives the Gangler at Kaiju size, and the Patorangers form Patokaiser in response. The Gangler uses a teleportation attack to surround Patokaiser, and the Lupinrangers join in the fight with their Dial Fighters after PatoKaiser goes down.

Each bombards the Gangler with a different attack while Good Striker praises them, and PatoKaiser separates so Good Striker can join with the Lupinrangers. This, effectively, serves as a tag-in so LupinKaiser can enter the battle. With a saw on the left arm and a gatling gun on the right, they make quick work of the Gangler. Good Striker flies off after the trademark explosion signaling the death of the Gangler, and the Lupin Collection piece is returned to Kogure.

Back at GSPO HQ, a video is played showing how Keiichiro and Sakuya found Tsukasa, showing Keiichiro using Tsukasa’s love of soft stuffed animals to figure out what happened. The episode cuts to a preview of episode 5.

What did you guys think of this week’s episode? Is this the beginning of more teamwork between the two teams? Leave a comment below!