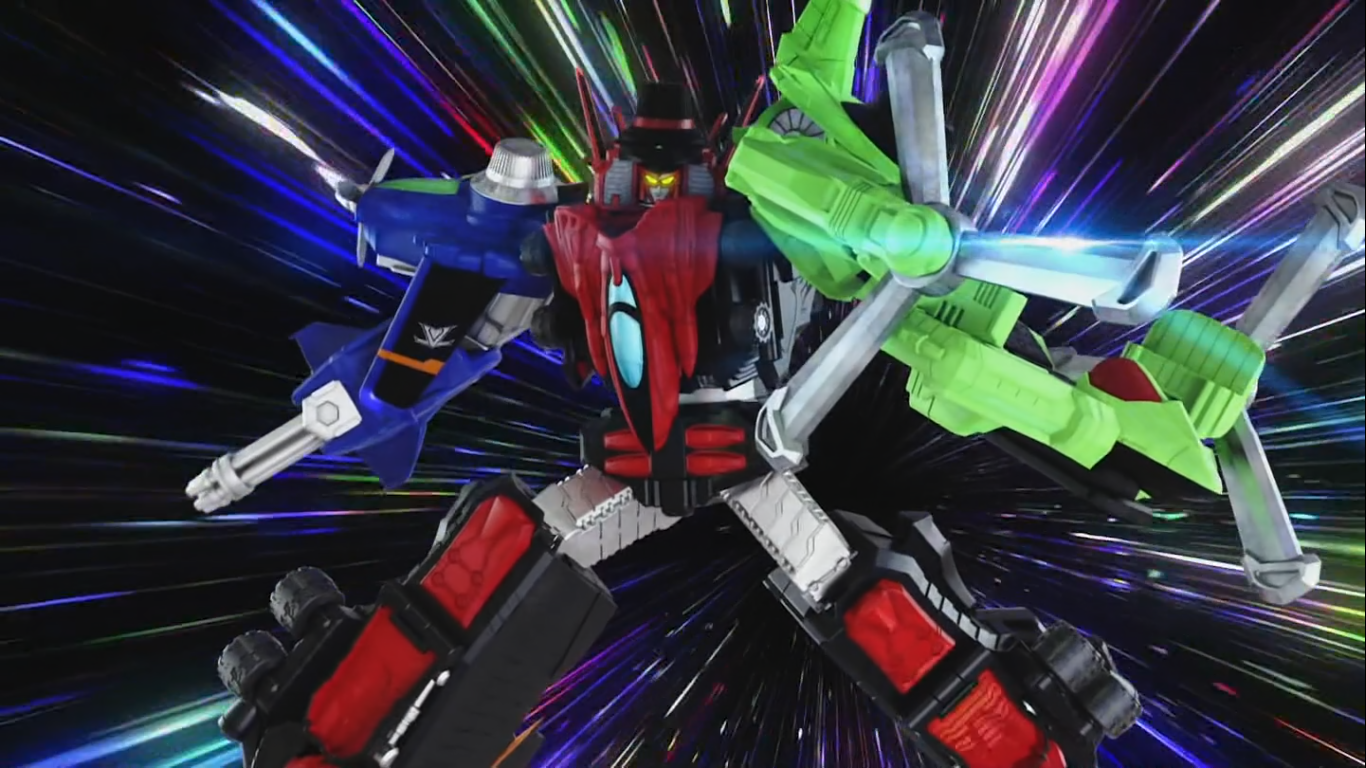 Coming off an episode heavy on the duality between the two teams, we pick up with Destra being confronted by Dogranio. He has learned about the plan to have Bundolt steal the two new vehicles seen last week. Dogranio wants to know at once who the informant is, and name drops a new character, Zamigo, before we cut to a man in an odd outfit walking through a crowd. Dogranio’s search for a successor continues, and he mentions naming Zamigo.

The cafe is busy today, leaving Umeka busy waiting tables. Kairi is nowhere to be seen, but Touma handles the cooking and says Kairi is likely looking for Bundolt.
GSPO HQ is similarly alive with activity, as they try to track Bundolt too. Like Kairi, Keiichiro is missing, and we seen him spying on people in a park, drinking coffee from a can and scowling as he always does. Keiichiro’s mind gives us a flashback of his defeat at Kairi’s hands in the last episode, and we cut to Kairi seeing Keiichiro in the park. Kairi decides to spy on Keiichiro, via conversation, before Keiichiro jumps and exclaims, “Damn you thieves! I’ll get you!”

On a tip from Jim, he takes off after Bundolt before Kairi can get up.
Bundolt, knowing he’s been made, asks for a new Mask, or human form, before being confronted by Gauche. He begs her for help, though the tone is set in such a way as to imply she was sent there to kill him.

Back on the Patoranger side of things, we see a flashback of Tsukasa and Keiichiro being assigned to the anti-Gangler unit within GSPO, and Tsukasa sits in Commander Hilltop’s chair for a moment. Is this possibly foreshadowing something? They exchange words about their motivations and feelings, and Keiichiro does not seem to understand what Tsukasa is saying. He is left dumbfounded when she runs off.

The Lupinrangers are having a slightly different conversation back at the cafe. Sakuya comes in for lunch, gossiping about Keiichiro and Tsukasa fighting. Sakuya expresses that Tsukasa slapped Keiichiro over a difference in opinion on the course of the investigation, and we cut to an upgrade Bundolt rampaging to get the Lupinrangers to come out and fight him.
Sakuya, not knowing that his favourite waitress is LupinYellow, assures them the GSPO will stop Bundolt. After a brief exchange, the Lupinrangers decide to join the fight against Bundolt as well, with Kairi hoping to exploit the division within the Patorangers.

As before, the teams engaged Bundolt and a squad of Pordermen. They do roll call during combat, and end in a flashy pose.

Ignoring the Patorangers, they focus solely on engaging Bundolt. Tsukasa turns to Sakuya, reminding him that their target is the same, and Touma gets between the two Patorangers to let his companions continue. As they do, Keiichiro and Kairi have their usual stare down, with Kairi doing his best to get in Keiichiro’s head. In this scene, the writing and shot composition do an excellent job of painting the picture that Keiichiro is slowly realizing how insufferable he can be.

Kairi does an excellent job of getting under Keiichiro’s skin and into his head as well. There’s a layer of depth and complexity to these characters not consistently found in Sentai, and the writers do a good job of peeling back the layers a little more with each episode. As is becoming a trend, they disengage from the main conflict to take each other on, with the shaky, erratic camera movements emphasizing the energy in each move and each hit.
Bundolt launches an attack at the pair, and Kairi dodges easily, leaving Keiichiro to take the full force of the hit. In his first true heroic moment thus far, Keiichiro shoulders the load of falling debris, quite literally, and is revealed to have saved a mother and child hiding under a set of concrete stairs.

Sakuya takes the boulder, while Tsukasa evacuates the two civilians, and we see Keiichiro remembering his own words about responsibility and upholding public safety. Good Striker appears, and gives the bike Trigger Machine to Keiichiro. As the Patorangers’ leader lines up a finishing shot, Kairi breaks into Bundolt’s safe and steals his Lupin Collection item. Keiichiro passes out after his finishing attack. Kairi remarks that, “Today we’ll take the loss.”
The now Kaiju-sized Bundolt attacks the Ranger teams on the ground, and the Patorangers leave with Keiichiro still unconscious. Good Striker helps the Lupinrangers form Lupin Kaiser and the mecha phase begins. In the midst of this encounter, we see Kairi use the Cyclone Dial Fighter to form a new left arm piece on Lupin Kaiser, complete with unique finishing attack.

After this, we get our first good look at Zamino, standing in a cafe eating a globe made of ice. When the shot pans out, we see the chair he’d been leaning on is frozen to the ground, even in the bright summer sun. Could this be the one who killed the families of the Lupinrangers prior to the events of the show?

As the episode winds down, we are treated to contrasting views of the two teams. While Kairi returns Bundolt’s item to Kogure, Keiichiro speculates on who Lupin Red might be. The reveal is inevitable and will have a big impact on the show as a whole, but personally, I am hoping they don’t rush it. The cat-and-mouse game between the two reds has proven to be one of the best aspects of the show so far, and the end of that chase will leave a gap to be filled, likely by the appearance of LupinX and PatoX.

What did you guys think of this week’s episode? Leave a comment down below!