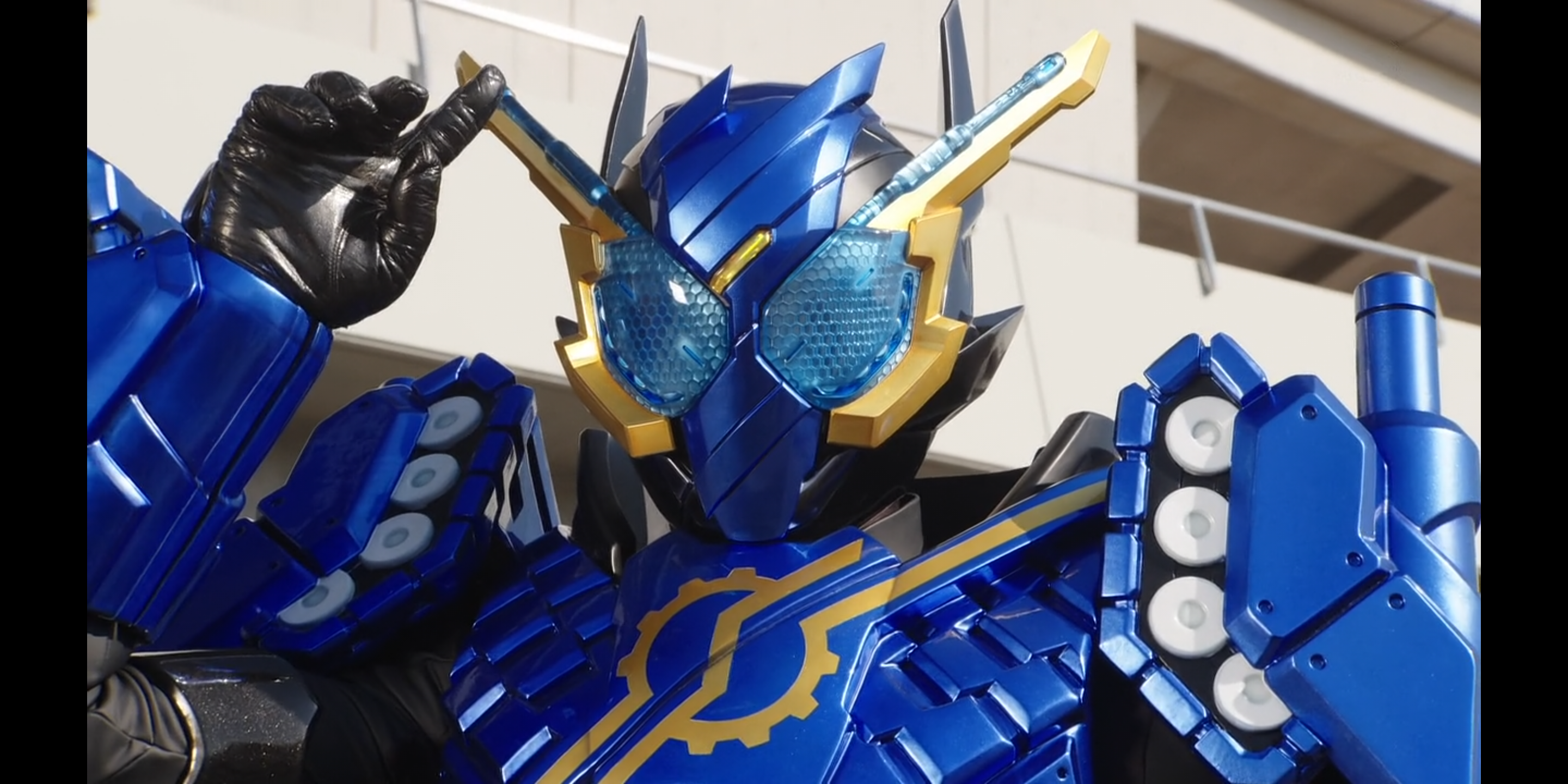 The second proxy battle continues this week as we pick up right where we left off. Gentoku emerges from the dust cloud he was left in previously, glowing eyes in the dark, and as he does, Utsumi types something into his tablet.

Gentoku is then seen using the Diamond Full Bottle to counteract RabbitRabbit, with devastating effect. In a single move, Gentoku has turned the tables.

Out of the arena, Sawa outs herself as Nanba’s spy to Misora and Ryuga, after revealing that Gentoku’s Sclash Driver is now uploading all of the data on RabbitRabbit to him in real time. The battle continues on as we cut to the opening credits.

Picking up where we left off, Misora and Ryuga begin to question Sawa, and we cut to a flashback of Sento and Sawa building the RabbitRabbit bottle and Full Bottle Buster. Sento works furiously, while Sawa talks to him about her family. She admits she lied about her father’s death, and confides that she is one of the Nanba Children. Sento is not surprised, and Sawa continues on, telling Sento about her role and her training.

This is a bit of a retcon from the previous scene. Sawa, in a flashback within a flashback, also says that she went through the experiments to become a Smash to help achieve this goal. She states that Nanba burned her, sometime after that, and she was expected to take her own life before being captured. When she refused, she joined Sento’s family, she says, and she shows seemingly genuine remorse for her actions in this moment.

When confronted about their mutual secret, Sento confides he has grown to care for Sawa as well, and that he puts faith in his friends even in the worst times, just because they are his friends. Cutting back to the present, the questioning continues, and it is revealed that Mazusawa bugged the Dragon Bottle. It all ties back to an old plot threat, the Smash Nabeshima and his family, who were taken by Nanba. Sawa claims, whether truthfully or not, that her latest round of spying was a deal made with Nanba in exchange for the release of the Nabeshima family.

This episode is heavy on exposition, used cleverly to move the plot forward, and we see flashbacks and angles from multiple characters. Gentoku cuts back into his own memories as the fight continues, and he begins to try to explain his previous actions up to this point, while videos of his past experiences play on in the background.

With composure returning, and clear strength in his words and his body language, Gentoku winds up a finishing move, and the Crack Up Finish goes off while Gentoku continues to lecture Sento about the weight of a nation. Heavy is the head, so they say.

We cut sideways to Kazumi, now shown to be acting as Sawa’s forceful arm in the attempted rescue of the Nabeshima family. His actions in the last episode, in this context, make much more sense.

As Sento rises from the ground in his own area, he removes the RabbitRabbit Bottle, twists it twice, and reinserts it, using a Build Up to enter TankTank form. This is very much the opposite of RabbitRabbit, as it should be, built for power over speed.

Looking on, Utsumi has no data for this new form and begins to panic a bit. Another flashback reveals that Sento was in on Sawa’s plan all along, agreeing to willingly surrender the data on RabbitRabbit, so long as Sawa keeps TankTank a secret.

Some of this feels like the writers trying to give Sawa a redemptive arc, and comes off a bit heavy-handed, but it serves the overall narrative in a good way. Build has had a running theme, recently, of compassion even for one’s enemies. It’s a poignant lesson in today’s world, full of tension and fear, and seems a little deeper, politically, than Kamen Rider is normally brave enough to be.

Sento’s TankTank finishing attack involves the versatility of TankTank coming out in full force, as the lower half of his body transforms into tank treads and he fires on Gentoku from all sides with the Full Bottle Buster. Gentoku’s transformation disengages, and the battle ends as Kazumi returns to razz Ryuga for “Holding Miitan’s hand like that.”

Sawa says her final farewell to Nanba, via the drone camera recording the battle, and Nanba indicates that he may have something bigger planned for her. An assassination plot, perhaps? Since Gaim, the writers of Kamen Rider series have been far less hesitant to remove pieces from the board, so to speak, and Sawa’s redemption could be seen as a very large red flag signaling her impending doom.

In the aftermath, Nanba is calm, but the PM of Seito is having a meltdown. As he does, Nanba reassures him that, “Winners write history.”

Stalk is waiting in the wings, ready to take over when Seito’s PM lacks the drive to go as far as is needed. It’s clear, from this scene, that Nanba is the major player moving all the pieces on the board, vying for control however he can get it. We cut back to a moment of reconciliation between Sawa and the rest of the core group, going over the results of their plan. Kazumi can go home, he says, back to Hokuto. He adds that he hopes his deceased friends are happy, looking on from the afterlife, and we cut back to the previous scene. Blood Stalk assassinates the Prime Minister of Seito, leaving room for Nanba to become the new PM. Nanba pauses next to Stalk, lets himself be sprayed with Nebula Gas, and changes into Seito PM Midou, at least physically. The differences are not apparent at first, but Nanba, in Midou’s body, begins plotting to take over the country more openly. He has an army of drones on standby, kitted out like mecha and waiting to go.

We then cut to a preview of the next episode, which promises to ramp up the meta plot surrounding Pandora’s Box and the Martians in a big way. This episode leaves us with a lot of details to speculate on, and I am, personally, looking forward to what comes next.

What did you guys think of this week’s reveals and plot twists? Leave a comment down below and let’s discuss!