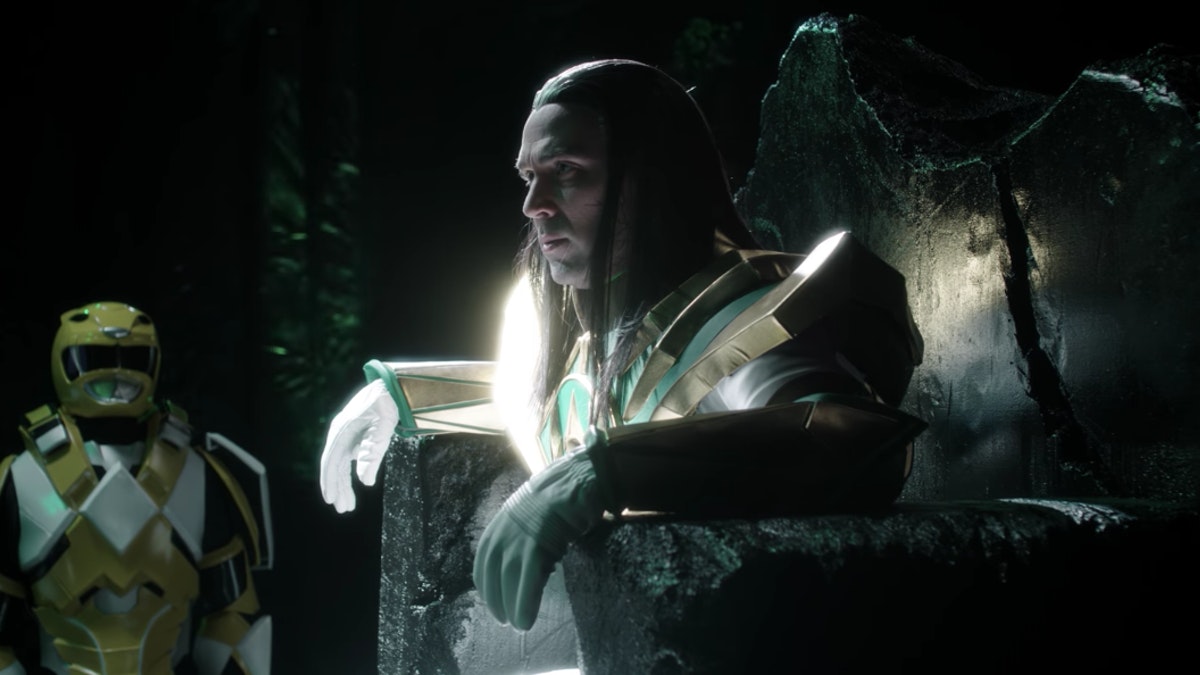 Last week, a live-action trailer was uploaded to social media advertising the upcoming Shattered Grid story arc of the Mighty Morphin’ Power Rangers comic line.  The trailer, created as a prelude to the story, opens with a series of shots showing iconic MMPR items, including a morpher and power weapons, in display cases with severe wear and breakage.  Overlaid are sound bites from across the series: Jason speaking of the importance of hope, Mentor Ji explaining the responsibilities of a Ranger, Jen Scott affirming the mission that brought her to the year 2000.  We then see the helmet of the comic-exclusive Tyrannosaurus Sentry, mouthpiece bare and flat, as a reflection of the In Space Rangers morphing glares in the eyepiece.

A wider shot shows a broken chair sat in front of multiple scenes from the show, a pair of RPM clips being featured in particular, while the camera swings around and shows us the chair’s occupant: Lord Drakkon, played by Jason David Frank.

“So many Rangers.  So much potential.  Squandered for so long.”

Another sentry comes into view next to Drakkon, this time Sabertooth-class.

“My Lord, the generals are ready.  They simply await your command.”

Drakkon watches one more scene play out, this time from the original Command Center, Tommy Oliver in civilian clothing standing in front of his uniformed team.

“What’s important to me now is my friendship to all of you.  I never want that to change.”  Tommy motions across to each of them; Kimberly steps up to comfort him.

Kimberly’s reply forces Drakkon to turn his head.  The black veins in his face become clearer as the green-tinted scene fades.  Drakkon’s resolve is clear.

He leans forward to stand from the chair, his now-iconic helmet materialising on his head.

“We will invade their worlds; we will tear down everything that might protect them.  And then, when it’s too late and they’re powerless and alone, they will realize the truth.”

Drakkon steps over to a nearby balcony, passing by the destroyed Ranger relics shown earlier, and looks down at the US Capitol building in a dark, battered, futuristic landscape.  His helmet tilts behind him as he speaks again.

“They could have been Gods.”

He turns back to the landscape, raising his arms, signaling to companies of soldiers arranged in lines below while a squadron of airships rise before him.

The short film was interesting, to say the least; with the comic inviting more mature ideas about the fate of a world without victorious Rangers, this was the first real-life foray into showing what the comic has tried to portray, including a Tommy Oliver-inspired villain portrayed by Jason David Frank himself.  The popularity of the comic has created a space for fans to explore new ideas in the old formula, and this short teaser keeps in line with that idea.  In fact, the short seems to be celebrating the function of the comic through its use of Drakkon, representing the evolution of the oldest part of the franchise, watching multiple moments from the show and declaring his intent to destroy it all.

The visual design was fantastic, from the red and yellow sentry costumes to Drakkon’s fortress set to the superimposed clips of the original shows.  The only glaring issue with the short was the Lord Drakkon suit clearly being too big for Jason David Frank.  However, as a preview of what’s to come for the most anticipated Power Rangers event since the Super Megaforce finale, it has done its job in properly setting up the central conflict of the Shattered Grid event in the form of a fun piece of live-action exposition.

You can watch the trailer in full below:

The Shattered Grid story has begun with the release of Mighty Morphin Power Rangers #25, available now in stores and online. Stay tuned to Toku Toy Store for full reviews and further coverage of the Shattered Grid event.