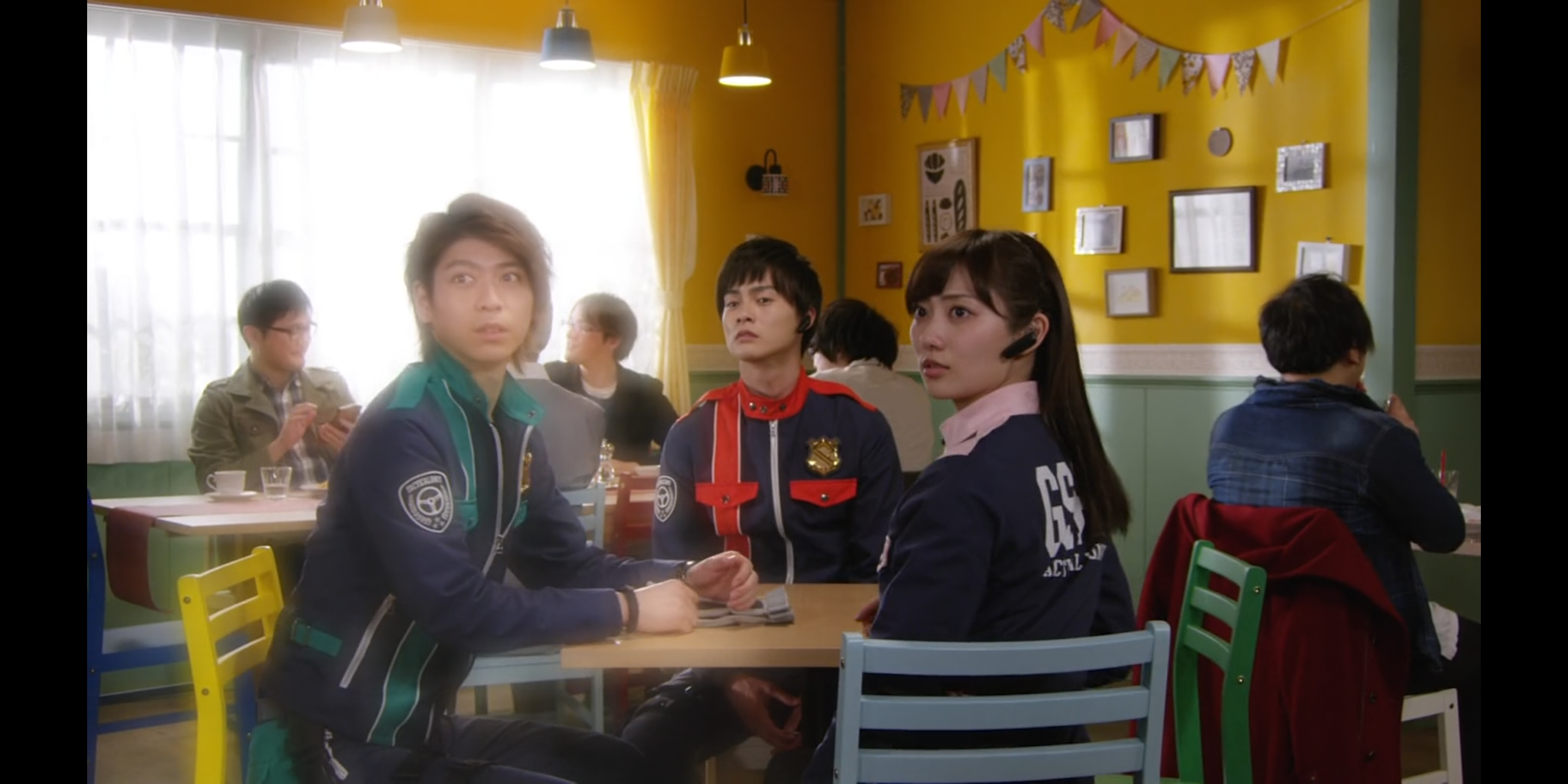 Backstory explosion! We open this week on reports of disappearances. An entire restaurant in Minaminaga was cleared of people in an instant. Guests, staff, everyone seems to have vanished.The Patorangers talk about this while having lunch in the cafe owned by the Lupinrangers, and Sakuya takes the opportunity to finally ask out Umika. He flounders, and is scolded by them as Umika gets flustered.

Sakuya leaves his contact information before departing, and the Patorangers are on their way to the scene of the crime. In a bit of a twist, Keiichiro asks Sakuya if he is serious about Umika. In the cafe, the change is a little different. Umika asks Kairi why he did not step in, and then the Lupinrangers are assigned their next target by a patron eating his meal. We cut next to a Gangler in a high-end restaurant, coercing a chef to help him. This will be our monster of the week this week.

So far, this season has done more to flesh out characters early on than I can recall seeing in the past few years. Even Kyuuranger took until nearly halfway through its total run to begin adding depth to the rangers. But this time around, we are a mere seven episodes into the total run, just over ten percent of the way through this winding story, and we see so many layers and such complexity to these characters. It is quite refreshing, at least to me. Even Keiichiro, who began life in this series as a trope, has slowly become more and more well-defined with each passing week.

We pick up the action on the Lupinrangers reaching the Gangler we saw earlier, sitting in the same restaurant, now empty of other people. They transform and introduce themselves, and we begin the fight. Touma warns that this Gangler’s Lupin Collection piece has the power to expand spaces.The action is destructive, in terms of property damage, but takes on its usual acrobatic flair. Touma is eaten by the Gangler’s space-based ability, which seems to take a lot of inspiration from the Demogorgon from Netflix’s show Stranger Things. This seems to be how people in the restaurants were disappearing previously.

After seeing Kairi eaten as well, Umika has a flashback of her sister’s death, which leads to her having a panic attack under a counter and out of sight. She continues to hide as the Gangler looks for her, and it does not hear her. This creature, Mergout, is something of a glutton, it seems. In the other worlds the Ganglers have conquered, he was known to eat the native creatures, we are told. Umika returns to the restaurant alone, believing Kairi and Touma are dead.

In the dark of the empty room, she looks around and sees flashes of memories, remarking as her fear and panic hit her again that she is always the one being saved. We cut to her being bullied as a child, and her friend steps in. Flash forward a few years to their teens, and Umika has become a Mangaka. Umika and her friend Shiho are talking happily, holding Umika’s debut Shonen Jump issue, and we see Shiho’s death at the hands of the Ganglers was actually due to her saving Umika from that fate.

Back in the present, Umika says that she can’t do anything, and Kogure, having joined her, interrupts to remind her how capable she truly is. Her power has transformed her, and he continues to urge her on. She forms a plan, with Kogure’s help, and then he leaves. His parting words let him take on a bit of a menacing side, which is fitting for a man in his position, and adds a bit of duplicitous implication to his character. Umika begins to do research and remember, and through research is able to narrow down the next target Mergout will hit.

The police get the briefing, and Sakuya begins to investigate past incidents, rather than looking forward. Inside Mergout, the survivors and their restaurant tables are being digested. A child playing on a table falls toward Mergout’s digestive mist, and is saved by Kairi before he and Touma begin to talk about past experiences.

Under the cover of their date, Umika sets up a meeting with Sakuya at the restaurant she believes will be the next target.

At the same time, we see Keiichiro and Tsukasa doing a forensic investigation of previous sites.

Mergout, as predicted, appears quickly and Sakuya does not hesitate to jump into action. Not that he knows Umika knows, but he outs himself as a Patranger to this seemingly innocent, ordinary woman, before she darts off to the womens’ room to change and contemplate entering the fight as well. The other Patrens arrive and it becomes a 3-on-1 encounter, less acrobatic and more about gunplay, but still with plenty of style.

When Umika jumps in, she goes right for the target, getting between Sakuya and Mergout easily and stealing Mergout’s Lupin Collection item. The moment it is removed from its safe, Kairi and Touma reappear, as well as the survivors of the other restaurants.

The civilian survivors credit the Lupinrangers for saving them. The battle continues with the Lupinrangers and Mergout, and when it enters its mecha stage, we see them tag the Patrens back in, and the debut of PatoKaiser Biker form.

After things calm down again, the Patrens return to the cafe, and Sakuya asks what happened. They hadn’t spoken again after being interrupted, it seems, and Umika says that she dropped her phone. She comps Sakuya’s meal, and he goes into the anime/toku stereotypical romantic haze as she walks away. The shot is careful to only have this effect on Sakuya and his section of the background.

“She’s not only cute, but she’s nice too!” He exclaims. He knows he is in trouble. Through this exchange, Tsukasa listens closer to the staff’s voices, and begins to put the pieces together. The preview for the next episode strongly suggests the identity of the Lupinrangers will be revealed to the police next week.