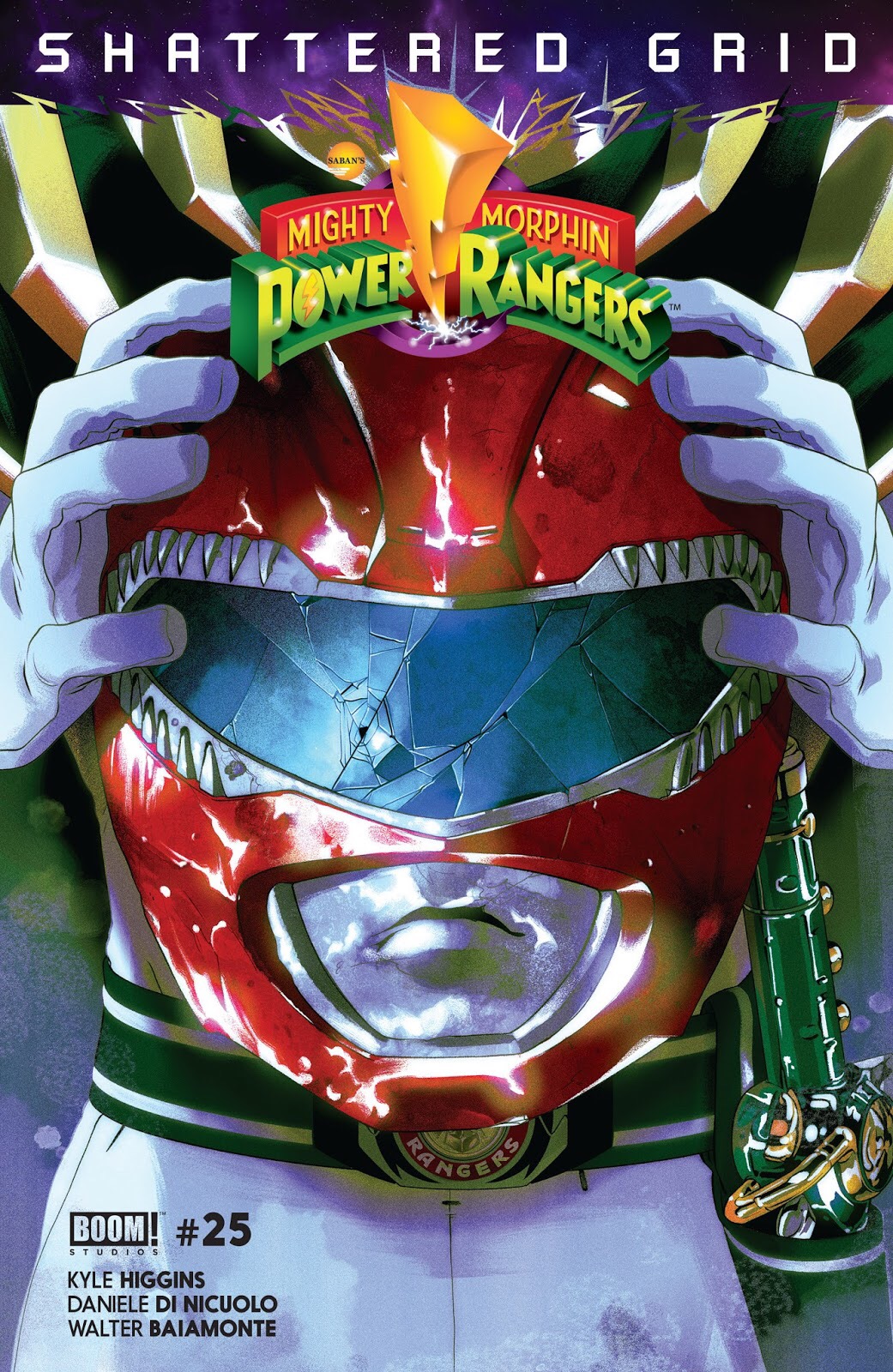 The stakes were already high coming into Shattered Grid, but… Wow. All I can say is, “Wow.” A MASSIVE SPOILER WARNING for the rest of this review, as one of the biggest players in the entire franchise of Power Rangers is removed from the board on Lord Drakkon’s quest for interdimensional dominance.

We open the issue on the aftermath of issue 24. Lord Drakkon, the parallel/future Tommy Oliver, has escaped from the Promethea facility where he was being held. We begin with the Time Force rangers, in the Time Megazord, trying to close a breach in time and space.

The breach is accessed by a large, imposing figure silhouetted to appear as Drakkon. His size has been scaled up to match cosmic entities like Galactus. A massive hand juts forward and three of the five Time Force rangers are killed instantly, ripped from the Megazord and into space. We see a heartfelt farewell between Jen and Wes, before the Time Megazord is destroyed and Jen time travels to Angel Grove, circa 2018.

Already, the stakes are through the roof here. Drakkon is not playing around, having already established himself long ago as a bigger threat than Rita, Zedd, or anyone else the rangers have faced up to this point. The ease with which he obliterates Time Force serves to reinforce this point, and we have even touched the A plot of this issue yet. Cutting back to the command center, we see the rangers picking up the pieces.

Saba is dead, killed by Drakkon, and we see Drakkon himself escaping to a massive library, or maybe a sanctuary that is run by Ninjor. Ninjor, unaware anything has happened, believes Drakkon is what he appears to be, a time traveling version of Tommy with a broken morphed and a new set of powers based on the black dragon. This is a great callback for long-time fans of the series, and serves to expand the scope of the comics continuity in a good way.

We see Ninjor repair the Black Dragon morpher, remarking that the components were, “Forced together with brute force,” and that the creation was “poor workmanship.”

Ninjor, it seems, is making Drakkon even stronger here. The dialogue implies that the Black Dragon morpher as it was previously shown was imperfect. Ninjor repairing it and teaching Drakkon ninja techniques only escalate the threat of Drakkon even more. We see him morph for the first time, calling out the power coin as Black Dragon, and then he takes his leave of Ninjor.

Back in Angel Grove, the rangers attempt some normalcy while they process their situation and the next move they need to make. Billy and Trini work on blocking Drakkon’s known energy signature from the command center, while Tommy and Kimberly have a date. There is a cute, awkward exchange where Tommy tries to kiss Kimberly, but she swerves away at the last second. They part, and Tommy takes a cut through an alley on his way home. It is at this point that we see the gut punch of the entire series up to this point, and a character who is central to the Power Rangers mythos is effectively erased from it.

Drakkon, trying to recharge the black dragon crystal, steps out from a tear in spacetime and stabs Tommy through the back with his Saba, and the sound causes Kimberly to come back. Jen, the last survivor of Time Force, enters the scene. She opens fire on Drakkon without hesitation, telling Kimberly to do the same. Drakkon disappears quickly, but by the time the fighting is done, Tommy Oliver is dead.

There is no more Green Ranger as we enter the next phase of Shattered Grid, and writer Kyle Higgins has stated in interviews that the next issue, due out April 18th in the US and UK, will focus heavily on how the Rangers deal with the loss. He has also said that Matt, Kimberly’s boyfriend from Go Go Power Rangers, will play a central role in what is to come. What role could that be? Personally, I believe he will take up the mantle of Green Ranger, but only time will tell.

In conclusion, Issue 25 is a fitting start for the first major comic book event in Power Rangers history, full of all the best elements of the franchise while adding familiar elements from its comic book contemporaries. Shattered Grid continues next in Mighty Morphin’ Power Rangers # 26, and Go Go Power Rangers # 9, both out in April.

What did you guys think of this phenomenal issue? Leave your thoughts below!