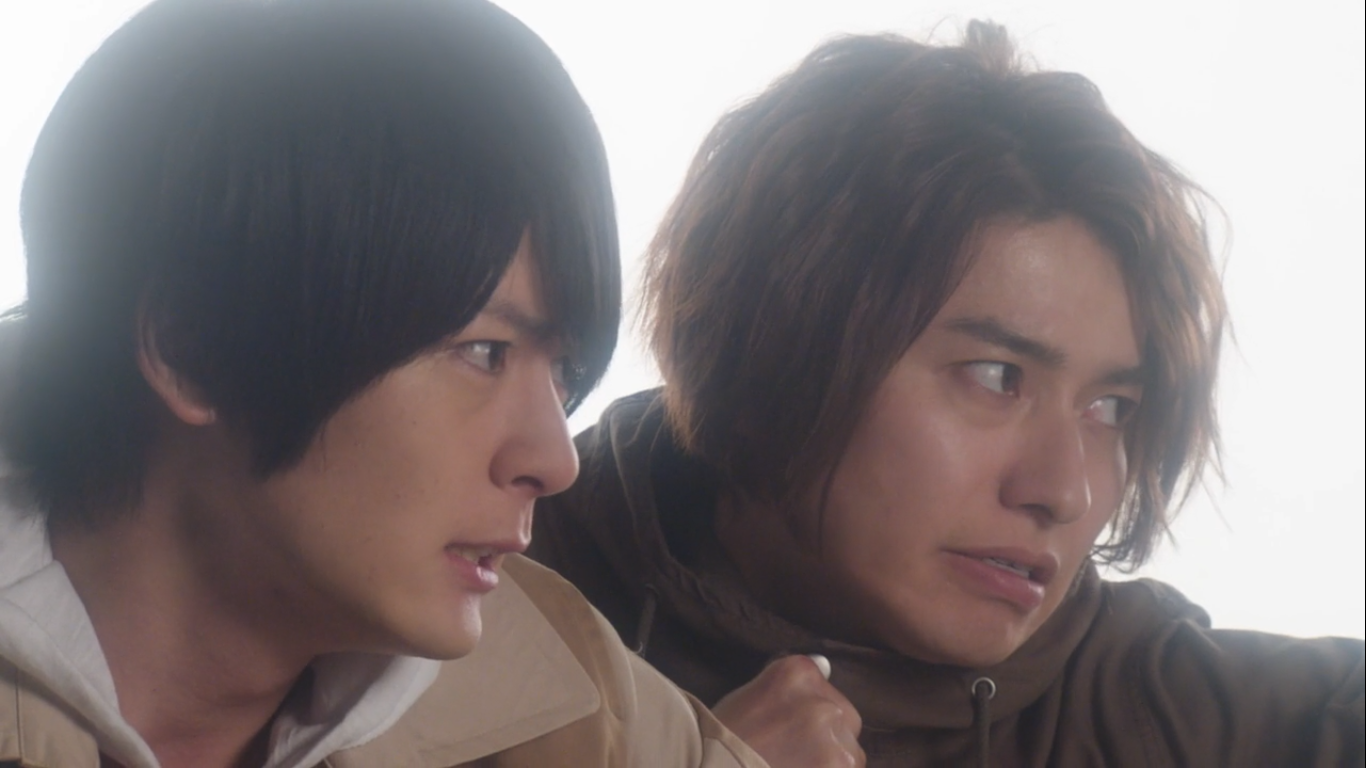 This week’s episode of Kamen Rider Build brought to you by The Power of Friendship.
Blood Stalk has Pandora’s Box and nearly a full Pandora panel. We cut between three scenes in the opening: Blood Stalk activating Pandora’s Box to bring down the Sky Wall, the invasion of Seito’s forces into Hokuto, and Nanba, now in Seito Prime Minister Midou’s body conducting an orchestra and chorus.

The music he conducts plays over the reshaping of the Sky Wall, creating a ringed area around Blood Stalk. The music ends and we are left with a top-down view of the new terrain, a wheel with three spokes jutting out.

After the opening credits, we are treated to an exchange between Prime Minister Himuro and Nanba. Himuro cannot believe he has been double crossed. The forces of Seito are employing upgraded soldiers called Hand Guardians, led by Stalk, and our heroes stand in direct opposition.

Stalk references something called the Pandora Tower, stating it is nearing completion. The pieces begin to move and rise, forming a layered tube jutting up into the sky. Stalk’s motivation, it seems, is to bring the same disaster to Earth that occurred on Mars, and we see a flash of the same (possibly Nuclear) fireball that destroyed martian civilisation shown in earlier episodes.

A clever plot point is introduced, revealing that the media were aware of the Proxy Battle, but not of the results. The battle was not broadcast, it seems, and Nanba uses his influence to twist the media reporting of the result.

In the office of Seito’s Prime Minister, Nanba, Stalk, and Utsumi discuss the process of building Pandora Tower, stating that with only 27 bottles, they’ve a long way to go. The three Riders lament the loss of their homes, with Kazumi distraught to the point of openly weeping softly. Even his beloved Miitan does not seem to bring him out of his state. He exits, and Ryuga and Sento continue their discussion about saving Hokuto, while Misora tells them to take responsibility for starting the war. In the background, the city burns.

It’s a heavy cross to bear, no matter how many of them carry it, and Ryuga eventually exits as well. Troubled, Sento eventually goes back to see Prime Minister Himuro of Touto. The two are on the same page as to peoples’ suffering within the country. Sento suggests changing the strategy Touto has been using, but he has a plan. He asks Himuro for one Dollark, and then the scene cuts to Kazumi on the border, heading home.

Ryuga has beaten him to the border, and is shivering from the cold as he sits in the road. Kazumi’s bag is packed as if he is ready to return home for good, to liberate what he can of his country. Ryuga remarks that he wanted to fight with Kazumi for the sake of Hokuto.

As the two have their talk, Kazumi’s phone goes off, an alarm for a Miitan broadcast. Misora, talking almost directly to Kazumi, pleads to her audience to cherish their lives and find a way to work together, to fight together. Kazumi, remembering the times watching Miitan videos with his friends, hits Ryuga with his bag several times as he speaks, and explains that Hokuto is a place “Full of irreplaceable friends.”

While they talk, they are joined by Stalk, the Washio Brothers, and two Hand Guardians. They do not hesitate to engage, and the battle is shown through shaky camera work that, at one point, appears to be a first-person view of Kazumi’s perspective. Ryuga engages Stalk, reminding the latter that the former’s Hazard Level is higher. Stalk is unconcerned, and takes Ryuga down seemingly with a single shot.

The battle continues and we see Misora with a bag full of tickets for things like a handshake, an ear cleaning, etc. And she remarks that this should be enough to persuade Kazumi.

Back on the battlefield, the two Riders already in combat are joined by Sento, who engages with a transformation into RabbitRabbit form. He is taking this seriously, of course, but more so as we see a montage of the friendly characters who have died up to this point. Sento, bathed in white light, sees the three Hokuto Hard Smash looking on from the afterlife, and begs their forgiveness so that he can protect everyone.

Kazumi, unmoved, says that he will end the war because, “It’s Miitan’s request, after all,” and the battle rages on. Washio Fu, nearing defeat, becomes Hellbros, and Washio Rai exits the battlefield. Sento and Kazumi team up for a finishing move, with Kazumi using two of his friends’ Smash Bottles in lieu of the Robot Jelly and together they defeat Hellbros easily. As Hellbros goes down, we see Washio Rai, in human form, holding onto Misora and threatening Ryuga.
Before anything can come of this, Misora frees herself, wrapped in glowing gold light and eyes lit up like emeralds once again. We have seen her use this power before, but here we learn the source. The bracelet Misora wears allows her to share her body with Vernage the Queen of Mars. As she speaks, she names herself, and uses exclusively plural pronouns, only calling herself “We.”

The episode ends and we get a preview promising the truth of Pandora’s Box in episode 30.