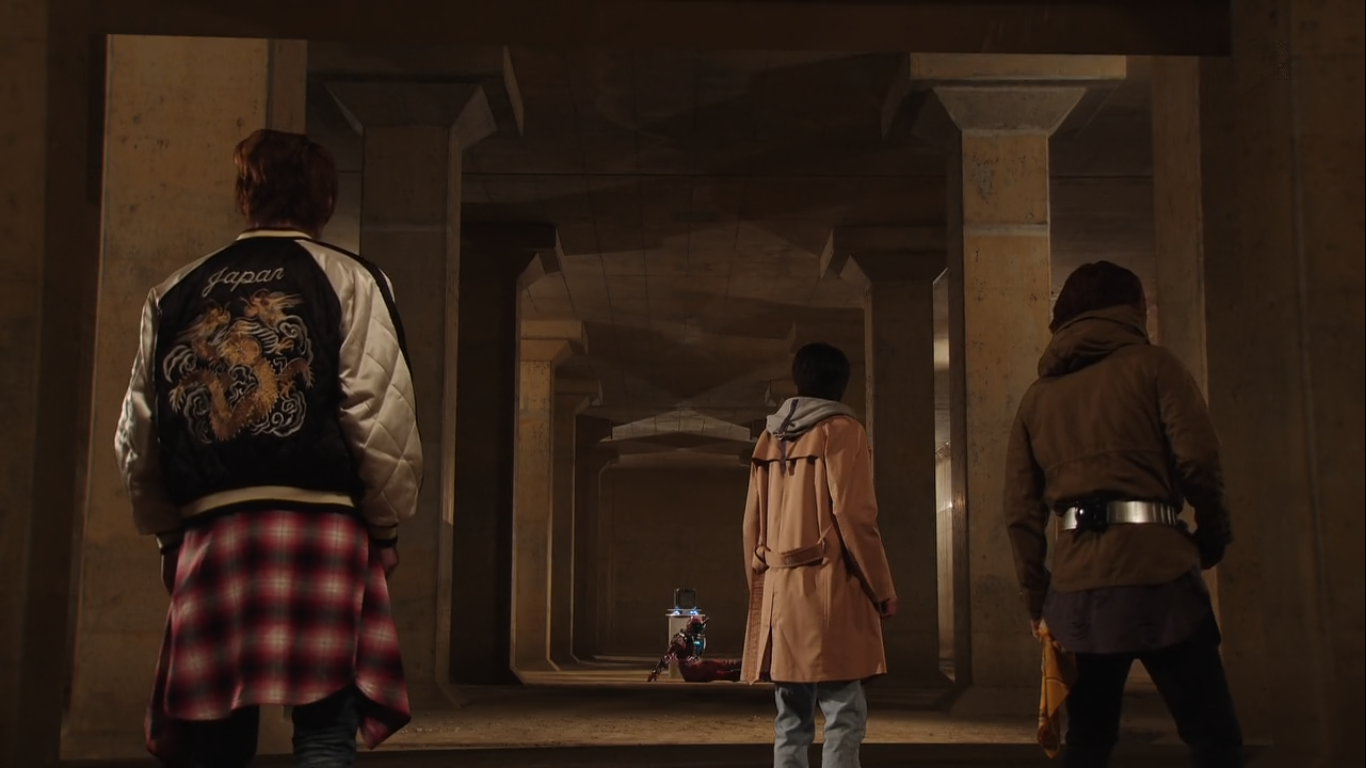 This week, we have another episode packed with exposition, and the plot jumps forward by leaps and bounds. This episode is essential for anyone who wants to keep up with Build, moving forward.
Picking up where we left off, Misora learns that Ryuga might not be human. The news comes via Sawa, and the conversation takes place while Sento and Ryuga continue to battle the Washio brothers. It’s an odd scene, a beach filled with picture frames of varying sizes and shapes. This is seemingly a pocket dimension inside of Pandora’s Tower.
Gentoku enters the battlefield, and brings with him all the intensity of a Kurosawa film. Something about his aesthetic always seems to be able to call back to an earlier time in Japanese cinema, while still capturing the high level of technology that comes along with a setting like the world of Build.

As the fight continues, Gentoku reveals that everything that has happened to Ryuga thus far, including Kasumi’s death, has been a part of Isurugi’s master plan. The intention is for Ryuga to get stronger, at all costs, and explosive growth requires a major emotional response.

Far away from the fighting, Sawa continues to explain her findings to Misora, and we see a flashback of a research lab operated as a partnership between Nanba Heavy Industries and the government.

Which government, Sawa does not say, but the timeline is briefly thrown into question based on Sawa’s statements that Ryuga was a research experiment at the lab. She continues on and we are treated to an extended flashback sequence that reveals Ryuga’s origins, as well as some information about the world as a whole leading up to the Mars mission.

Gentoku takes on Sento once again, but this time the fight serves as far more than another clash. In a surprising turn, Gentoku tells Sento as much as he can, then gives Sento an order. “If you understand, take me out now.”
He gets to his feet, and in a single stroke, the fight is over.

Gentoku collapses to the sand, defeated, and Sento passes on what he has learned. The group continues on through Pandora’s Tower, and find Stalk at the heart of it, guarding Pandora’s Box. Stalk summons a pair of Nanba-designed android soldiers to handle Sento and Kazumi, while Stalk turns his attention to Ryuga. Stalk’s new ability is shown far more directly here than we have seen previously, now that he is involved in combat lasting more than a few seconds.

Stalk is no longer holding back, when we cut back to the fighting. After a tense moment, Ryuga picks himself up off the floor. When he does, his eyes are burning red. Stalk hits him again with a beam from Pandora’s Box, creating the Magma Full Bottle, and Ryuga gains the new Cross-Z Magma form shown in the marketing for the Magma Knuckle item.

The transformation is relatively slow, highly detailed, and as is common with a new form, shows the new suit one piece at a time before he enters the arena once more. After being defeated, Stalk remarks that he needs, “The Ultimate Driver,” for everything to fall into place, and our heroes make their exit.
It seems Stalk will become Kamen Rider Evol, after all. This twist, while predictable, is consistent with his design. The last piece of information Sawa and Misora uncover is that Sento’s father had played a part in the Sky Wall incident, and after the reveal, the episode ends. Next week’s episode, based on the preview, will focus on this information and uncovering where Sento’s father fits into the puzzle.