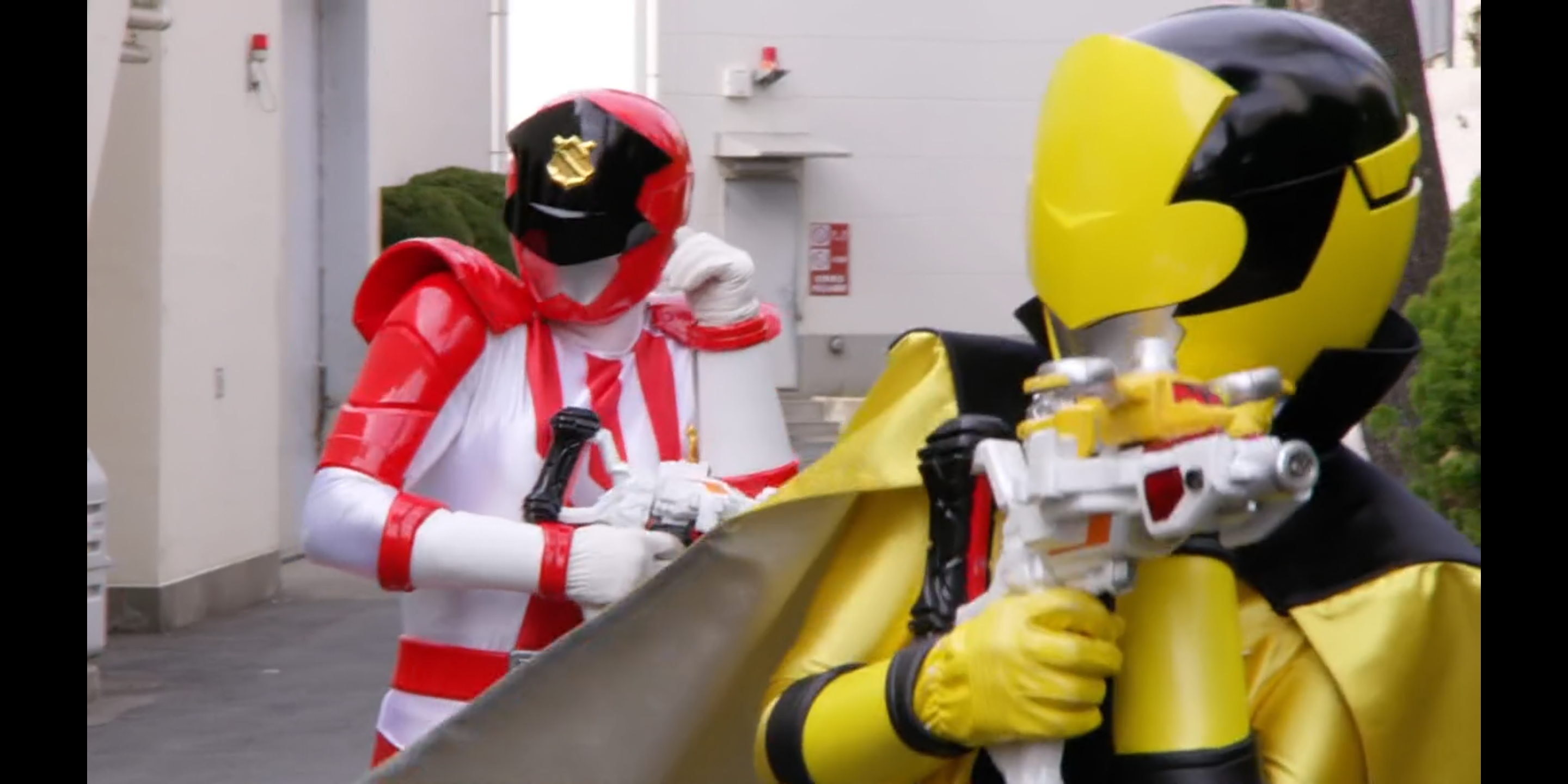 What an opening this week, as the Patrens are profiled like the police characters on shows like Law and Order in the US and UK. We get a flashy introduction, with the Patrens looking fantastic in fitted suits, and a short battle against minions in black silhouettes of Lupin Red leads to the reveal that they were on a movie set the whole time. Sakuya is enthusiastic about the prospect of making a movie and making the Lupinrangers look, “totally lame.”

It’s a light-hearted, somewhat over-the-top set up to what proves to be a return to the more familiar tone of previous Sentai shows. The change is not unwelcome, as a bit of fun or silliness can easily balance out the melodrama that can sometimes come with darker tokusatsu series. Ike Nwala is great as Commander Hilltop, as always, and his somewhat comedic bravado is clear as he suggests they make a Patren movie as a PR push. The Lupinrangers, it seems, are popular with the common people.

Speaking of the Lupinrangers, it seems that they are keeping their eyes on the prize, so to speak, and their next target is the film studio where the Patorangers are shooting their PR film. The humour in this episode is very adult, for a Super Sentai series, complete with Sakuya and Keiichiro genderswapping anatomically, as well as mentally, at the command of the movie director, who exclaims that Sakuya needs more sex appeal.

Confusion ensues when the Lupins arrive and see the police already on site. They are unaware of the movie being filmed, and are on target to track the Gangler, who is set up early to be rereleased as the movie’s director. Sakuya refuses to stop the movie, leading to some cringe inducing forced cuteness on his part. If nothing else, the actors who play the Patorangers all seem to be enjoying themselves in this episode, especially Ryo Yokohama, who plays Sakuya.

After transformation, there is an interesting moment using Sakuya’s voice and a well-endowed female suit actor, using a feminized version of the Patren Nigo suit. The other Patrens experience a similar transformation, and begin to panic, while the Gangler uses the opening created to knock all six to the ground and escape. The suit actors, now a female red, female green, and male pink, are swamped by the film crew, and the scene cuts out.

When next we see the Patrens, we are back to the actual team actors, now genderswapped in hairstyles and clothes. Tsukasa, as a male, bears a striking resemblance to Kamen Rider Drive’s human form. A brief flashback gives us some clues into Sakuya’s background as the group talks and Sakuya’s introduction to his partners is shown as a motivational moment of personal growth.

After the gender swap, it doesn’t take the Patrens long to figure out what the director, a Gangler called Pitchcock, is up to, and their shocked reactions to the new script show that they are clearly uncomfortable with the changes. The film begins shooting again with the Patrens in their new roles, and the true nature of it is revealed in no time.

From here, the normal battle routine turns into a parade of physical humour and sexual jokes, making the show fall into tropes that are bit more in the vein of ecchi anime like High School DxD than seen in the past.

The human form of Pitchcock is revealed, and the battle continues. Per the usual flair, the teams pair off to fight each other while one Ranger at a time goes after Pitchcock. When they get his Lupin Collection Item, they depart and leave the Patrens to make their move. Another comical scene plays out as their genders are inverted, returning them to normal, and each ranger grabs and gropes at themselves for a moment to make sure everything is in place.

During the mecha portion of the fight, we see the debut of the Hammer Dial Fighter, which has been previously shown in toy scans.

A wide, swinging spin attack with the new weapon destroys Pitchcock easily. We get a hilarious look at the Patrens in their normal bodies, still wearing their pre-transformation clothes. The episode ends on a light note.

This episode lacked in substance, but made up for it in laughs. Personally, I enjoyed it. What are your thoughts. Leave a comment below!