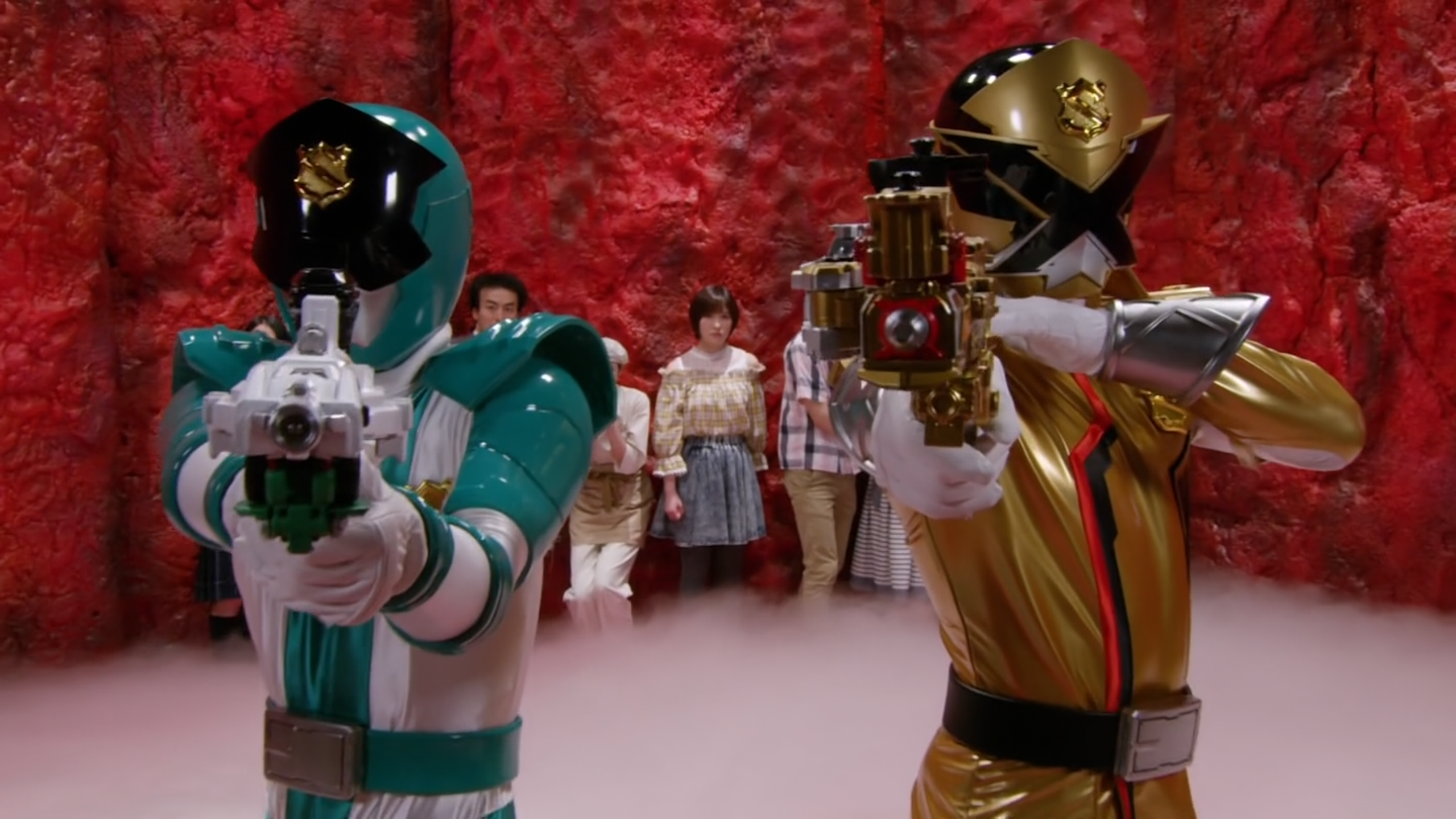 French romanticism is tested against Japanese sensibilities, as Noel has decided to play Cupid this week, in the name of furthering everyone’s favourite ship. After a quick encounter in which Noel meets the Lupinrangers as a member of the GSPO, he pickpockets Sakuya’s phone off of him, making Umika chase him to give it back. After the pair are gone, he remarks that he can’t help playing Cupid. This encounter leads to Umika discovering this week’s Gangler, Demeran, a classical capture-type Kaijin who catches people in some kind of flower pot.

Sakuya tries to intervene but Umika is captured, and what follows is a series of sitcom-level shenanigans that prevent Umika from saving herself without revealing her identity as Lupin Yellow to her neighbours, Sakuya, or others.

This allows Sakuya to play hero and get in her good graces. As part of this, he goes back to Jurer, apologises to Kairi and Touma, and then gets underway with the rest of the team. The other Lupinrangers spring into action as well, and we see a certain depth added to Noel as he begins to deeply regret pushing this. Demeran seems to have no motive other than capturing people, which is a bit sad due to the wasted potential there. The motivation could remain the same and the stakes raised dramatically if even a line about using the captured humans as food were to be added on.

When not focused on Umika being inadvertently forced to play damsel in distress, we begin to see Noel and Sakuya’s resolve tested, as the two work side by side to save the trapped Umika and civilians. Their desperation shows as they try more and more drastic measures to get the situation under control, until they finally figure out a way to solve the problem. For all his regrets, though, Noel takes full ownership of the situation and maintains control throughout, showing his experience and expertise hiding beneath this goofy, light exteriour.

Once the people are freed, the action is free to take a more dynamic turn, and the camera movements become far more erratic to reflect this. While not entirely subtle, it’s a nice change in pace as the whole episode begins to feel more frenetic and action-packed, even for as brief as the sequence is. Overall, another excellent entry this week, including the debut of X Emperor, Noel’s custom mecha sets up a few  things to come. With Noel’s X Emperor having two forms to start, like the man himself, it leads to possible combinations with both teams in different ways. X Emperor Blade could combine with PatKaiser, or X Emperor Gunner with LupinKaiser, just for the sake of inversion of expected pairings.

Noel and Sakuya play off each other well, and I can easily see them beginning to work as a buddy-cop duo a la Starsky and Hutch or CHIPS. The two are already growing close, and may continue to do so as they form an almost brotherly bond. The preview for next week shows a cooking contest, allowing Chef Touma to shine.