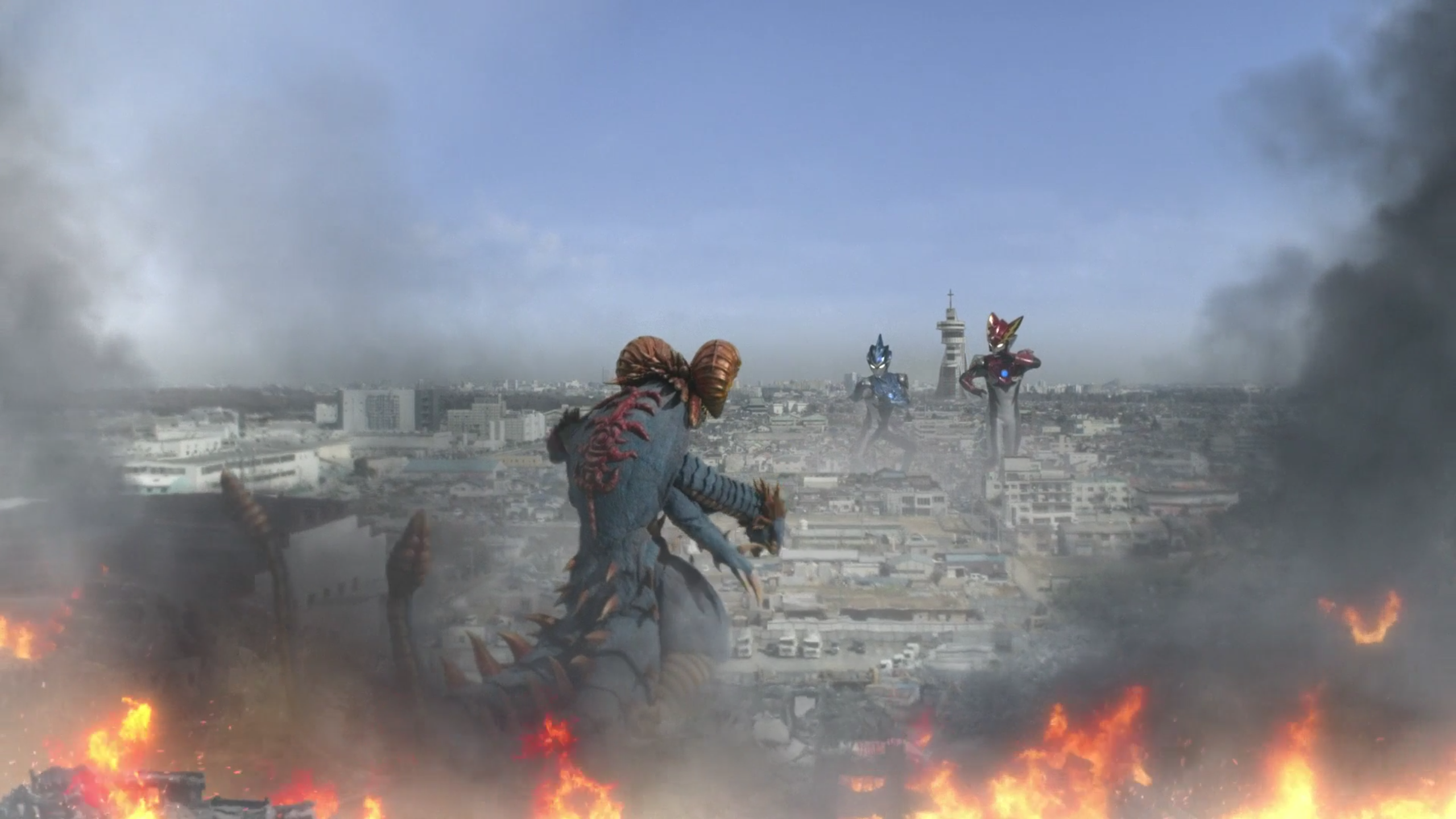 Stone birds, zany CEOs and more in this edition of Ultraman R/B!

Brotherly humour continues this week, even in the pre-credits narration from the duo, as Isami laments that he doesn’t think they have a victory pose. Katsumi disagrees. It’s the little things like this that add depth and colour to characters who could have otherwise been made very bland. Even little sister Asami gets a lot of characterisation this week, as the trio spends much of the episode in the Aizen Tech facility, now finally directly interacting with Makoto Aizen. The eccentric billionaire is running a Willy Wonka’s Chocolate Factory of technology, including jet packs, augmented jump shoes, and Kaiju-proof shelters, giving the whole facility and company the feeling of being a goofier version of Stark Industries.

Aizen himself is a central player in this episode and we get to see more of his excitable demeanour, while also being given a glimpse of a certain duality that exists in him as scientist, versus the public persona of the happy-go-lucky CEO. As a researcher, Makoto Aizen reveals that he worked with the matriarch of the Minato family, Mio, before her disappearance in 15 years ago. To put it into perspective, Minato Mio disappeared in 2003, if we assume the show is set in the modern day. Up to this point, Makoto Aizen had yet to take over his father’s small factory, then called AizenMech. In his research, he says, a theory formed surrounding the creation of Ayaka City’s legends and that the legends may be anything but.

It’s a curious bit of background information, and implies that Aizen may have a much bigger role to play later, especially given that he correctly identifies two of the falling stars of legend as the Ultraman brothers. The third, he assumes (again correctly) is the kaiju Grugio. The fact that he knows this much already could mean a few things, but personally, I am hoping he has a central role to play. The character is immensely likeable, and already his scenes can play serious or comedic to equally positive effect. Towards the end of the episode, he stops a man walking down the road and says, “You are exactly what I have been looking for!”

To me, this means he has some kind of plan and is more directly involved than he lets on.

Thankfully, all it takes for him to figure out the Ultraman brothers are the Minato brothers is their absence from the Kaiju shelter when the rest of the building is evacuated.

Also, Ultraman can fly like Superman now (because of reasons).A lot of toku shows leave the audience sometimes wondering at the leaps in logic it must take for the writers to keep the heroes’ identities hidden, but in this case, at least they seem to be getting right to it and doing away with the secret identity bit, if only in part. Inevitably, Asami will figure it out as well, and this can only add to the comedy dynamic of the family. Overall, though, this episode has the same great off-beat humour we have come to expect, while adding a touch of darker undertones to the series. I am very excited to see what is to come.

What did you think of this week’s episode? Leave a comment and let’s discuss!