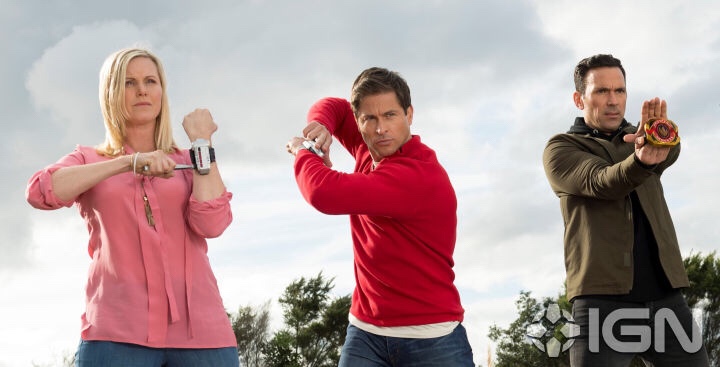 Can you believe it’s been 25 years since the premiere of the original Mighty Morphin’ Power Rangers? A quarter century on, the series is still going strong, especially now that we are getting a glimpse at the franchise’s anniversary plans. Revealed first by IGN, including the picture seen below, the announcement was recently made that the second episode of Power Rangers Super Ninja Steel’s second half will be a 25th anniversary tribute, featuring the return of at least three former rangers. In the picture, we see Catherine Sutherland, Jason Faunt, and the legendary Jason David Frank, all morphing in a team pose.

This means the characters of Katherine Hillard (here shown as Turbo Pink), Wes Collins (Time Force Red), and Tommy Oliver (in classic Mighty Morphin’ Green) are returning to the franchise for, at least, this one episode. Breaking from the series’ normal airing schedule of Saturday mornings, the 2th anniversary special episode of Super Ninja Steel is set to air in prime time, at 8:00PM US Eastern Time on 28th August, the original air date of the premiere back in 1993. IGN’s original article does also seem to imply that more Rangers will be returning, though they have yet to be shown.

Crossovers in this franchise have a bit of a storied history, with highs such as the comics story arc Shattered Grid and the TV specials Forever Red and Thunder Storm coming in as highlights, standing in stark contrast to the Legendary Battle special seen in Super Megaforce. If you want to see more of these crossovers, each season of Power Rangers up to Ninja Steel can currently be found on Netflix in the US and UK, and Shattered Grid is available through most comics retailers and Boom! Studios online.

Are you excited for this development? Leave a comment below and let’s discuss!