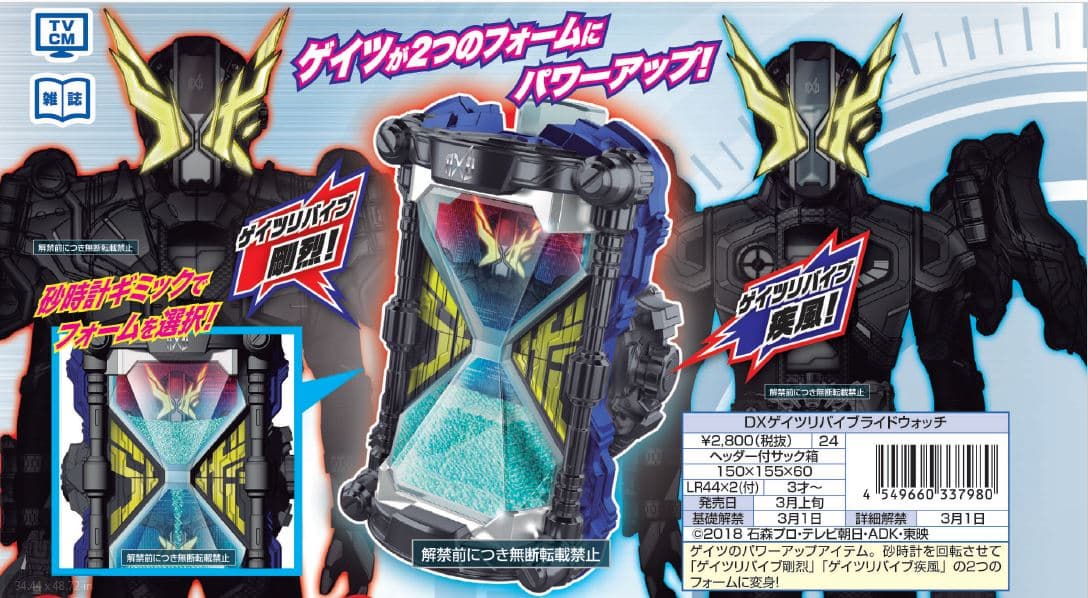 A series of new scans were released today, showing new forms for Kamen Rider Zi-O and Kamen Rider Geiz, seemingly using new gimmick items from the Q2 toy catalogue. In addition, a third Rider has been revealed, Kamen Rider Woz. As the name indicates, this will be the Rider Armor form of Woz, the beautiful Time Jacker who has served as both ally and antagonist up to this point. The forms, seen below, are called Zi-O II (2) and GeizRevive.

Zi-O II uses the Zi-O RideWatch 2* to transform, and will be given a new item, the Saikyou Grade, which can combine with the Jikan Grade to form Zi-O’s Ultimate Weapon.

GeizRevive will come in the form of the Revive RideWatch, a black hourglass that is usable by Zi-O or Geiz.

In addition, Kamen Rider Woz and the DX BeyonDriver have been revealed in the same batch of scans. For his Rider Form, Woz is heavily inspired by Kamen Rider Necrom, right down to the wrist-mounted Driver and green colour scheme. The BeyonDriver fits as the time piece not yet shown in Zi-O’s motif of clocks as gear, being that it is the series’ allegory for the Apple Watch and other smart wearable technology. It has a digital face and buttons, giving it a look that is somewhere between Necrom’s Mega U-Loader and the Buggle Driver II from Ex-Aid.

Kamen Rider Woz will have the following forms:

Look for all of these power-ups and items, as well as Kamen Rider Woz to debut in the upcoming episodes of Kamen Rider Zi-O over the next few weeks. Be sure to check back with us at Toku Toy Store for more information and scans as well.

What are your thoughts on these developments in the series? Are you excited for Woz to become a proper Kamen Rider? Leave your thoughts and let’s discuss!