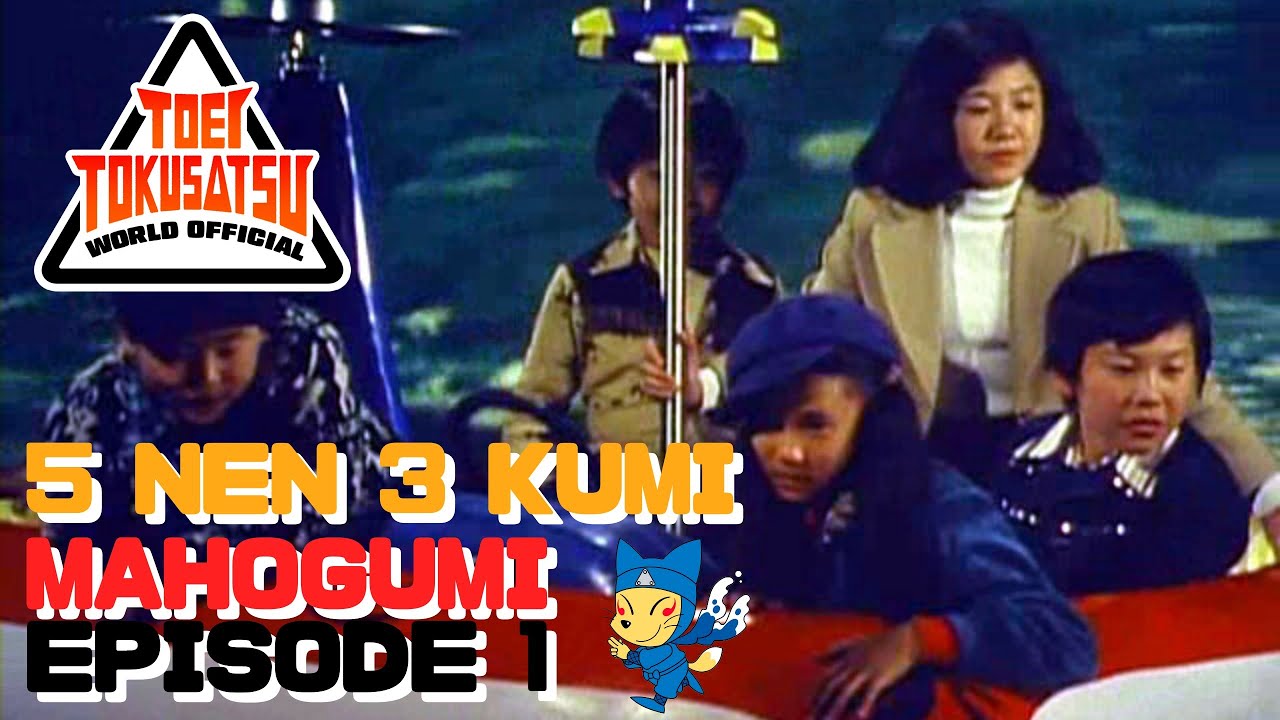 With a quick Google search bringing up relatively little about 5 Nen 3 Kumi Mahougumi, I was pleasantly surprised by what I found in its first episode. This despite the fact that I’m, personally, not all that into magic related stuff and that this series is decidedly lacking in many of the hallmarks of a tokusatsu, there’s enough here for the average toku nerd to get into… mostly because of a very familiar face.

5 Nen 3 Kumi Mahougumi (5年3組魔法組) literally translated as 5th Grade, 3rd Class Magic Group was broadcast on TV-Asahi throughout 1977. It is perhaps most famous, and most interesting, for starring a young Machiko Soga as Bellbara the Witch. Soga is best known for her roles in Super Sentai, including Witch Bandora in Kyoryu Sentai Zyuranger, but will be very familiar to Western audiences because of this character’s adaptation as Rita Repulsa in Mighty Morphin’ Power Rangers. In this episode, Bellbara is somewhat Bandora-like in her mannerisms but lacks the evil desire to take over the world of her Zyuranger counterpart. Instead, Bellbara is somewhat of a bumbling character. She is struck on the head by a can that the title group of 5th graders are kicking around; frustrated, she kicks a lamppost and the children take her back to a barbershop owned by one of their fathers. Here, she recovers and flees fairly quickly, leaving behind a gigantic handbag with a silhouette of a witch painted on it.

The children chase her down in an attempt to return it to her but, when they fail, the start to experiment with the magical trinkets within, guided by an elf-like character on a screen inside. First of all, they summon a giant, floating multicolour liferaft, called the Magikar, that they use to travel around the town. The also use a magical grappling hook that can pull any object they can picture from anywhere, a book that can metamorphosise any person or animal into another person or animal, and a strange shuriken shaped viewing device that shrinks down one of the children’s mothers before she catches them in the magic act. Nothing malicious so far, just pure kiddie hi-jinks.

It appears, then, that this series will simply follow this group of children as they dick around with magic for 41 episodes. Bellbara the Witch turned up again at the end, giggling that misfortune will follow if the kids use the last trinket in her bag but it remains to be seen what her role in this will be going forward. Perhaps we will start to see a hatred of children begin to surface as the series goes on but that may just be wishful thinking on my part, that she may be similar to her Zyuranger witch-counterpart.

All in all, this episode wasn’t offensive and the series may be worth the watch. If no further overarching story develops from Bellbara the Witch then it will risk becoming a bit formulaic but, still, it could be nice as a diversion if only to watch Machiko Soga masterfully do her thing.

You can watch 5 Nen 3 Kumi Mahougumi as well as a wealth of other Toei produced television on the Toei Tokusatsu World Official YouTube channel.