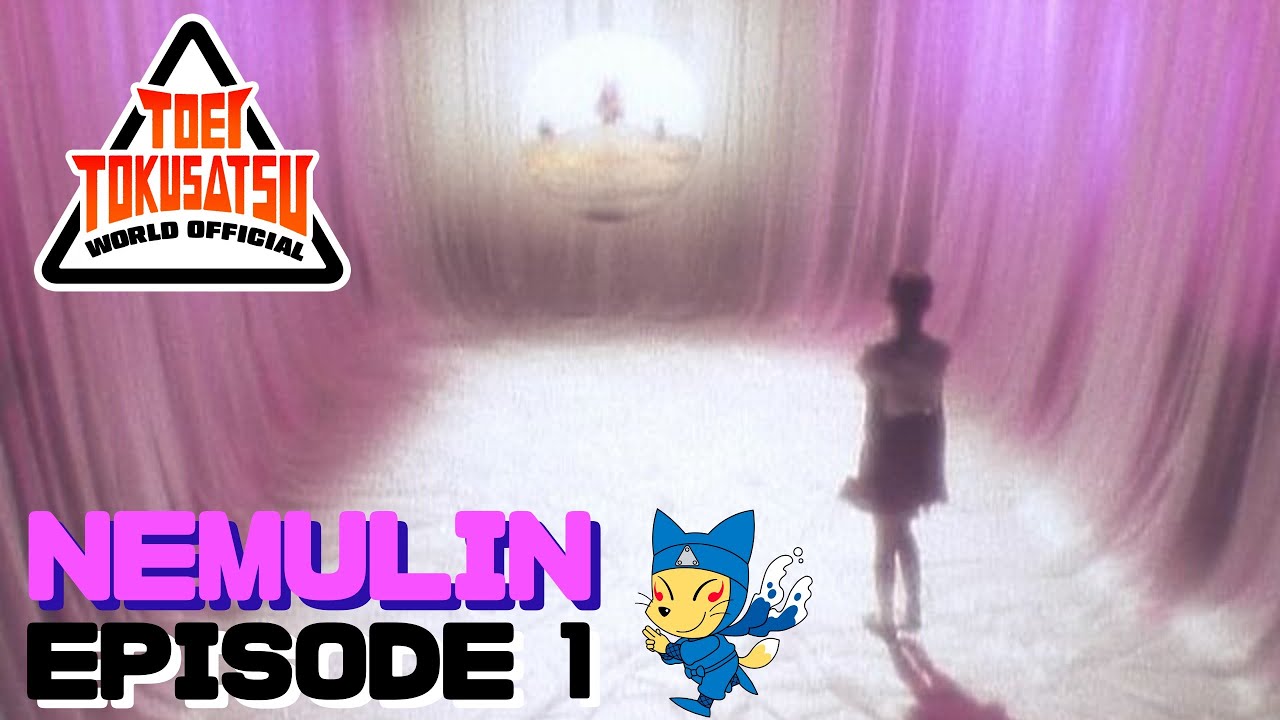 If you’ve been following these reviews as they’ve been published, then you’ll know that the Toei Fushigi Comedy Series have been a particularly divisive topic among the Toku Toy Store writing crew. Some have been ridiculously fun, while others have left us scratching out heads. Nemulin (どきんちょ!ネムリン Dokincho! Nemurin) is whole different experience though. The fourth entry in the series, the series ran for a total of 31 episodes between 1984 and 1985.

The series opens fourth-grader Mako Oiwa (played by a young Sayuri Uchida, who would later go on to portray Ako Hayasaka/Blue Swallow in Chojin Sentai Jetman) lamenting the fact her boyfriend Akira broke up with her. When she tries to burn of photo of them together the photo suddenly flies off, leading her to a mysterious dimension. All of a sudden what can best be described as a furry pink baby with moth wings for ears flies towards her, and she wakes up at home with two strange dolls and no photographs.

After being introduced to Mako’s family and seeing her get a little moody seeing couples at school, Mako comes to find that creepy baby at home casually drinking some milk. After frantically flying around the room the creature identifies itself as Nemulin, berating Mako for stealing “Vivian and Monroe” and waking her up from an 800 million year sleep.

The two argue for a bit, and then Nemulin uses her magic conch horn to awaken Vivian and Monroe – the two strange dolls Mako woke up with. At this point I was already pretty weirded out by this point I was downright horrified. The giant rock monster Monroe wasn’t so bad, but Vivan – a weird mouse/bat-creature in a glittery gold jumpsuit, was something out of my nightmares. Especially when it starts crawling up the walls and ceiling like the baby in Trainspotting.

Nemulin’s unholy hell spawns are hungry so start causing a ruckus at home, which freaks out Mako’s older brother Tamasaburo (I don’t blame him either). He runs out to get his mum, but she just blames him for the mess while the unwelcome trio hide on a shelf. After some good old fashioned child beating Tamasaburo leaves the house furious, and in his anger starts attacking both his friend and a couple of kids just holding hands. The Oiwas aren’t the most balanced of families.

Mako runs out to find her brother and calls on Nemulin to help save the day, who uses her magic again to wrap him up in a hose and spray him with water. After that she tells Mako to treasure her memories with her ex, turning her lost photos into a nifty little box. The family all arrive home, and find out they have a new lodger in the form of this furry pink monstrosity. And that readers, is the first episode of the strange little series we call Nemulin.

Unlike some of the other Fushigi Comedy Series I’ve watched none of the jokes really landed for me, though that might be because I was just so distracted by Nemulin and her compatriots. Nemulin looks like something that jumped out of an unsettling doll collection, and the less said about Vivian the better. I did quite like how Nemulin wasn’t on some sort of great mission and made just as much trouble as she helped, but that puppet is going to haunt my dreams for a good while.

I’ve never partaken in hallucinogenic drugs, but I imagine the experience to be something akin to watching Nemulin. If the weird pink baby moth isn’t enough to creep you out, then the downright terrifying bat man should do the trick. Having seen far better shows on the channel it’s hard for me to recommend Nemulin, but if you do want to give it a shot then I suggest avoiding the influence of drugs or alcohol. It’ll only make it all the weirder.

You can now find Nemulin as well as many other tokusatsu shows, on the TOEI Tokusatsu World Official YouTube channel to watch for free with English subtitles.