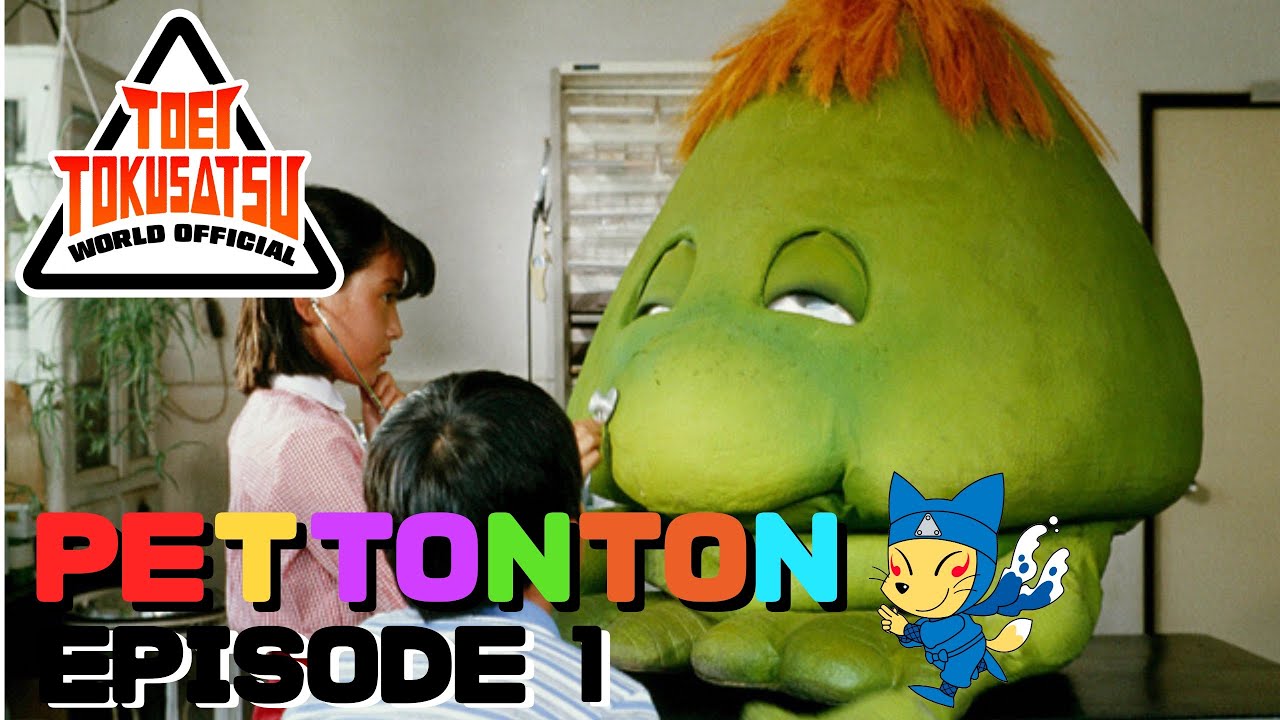 Joining the ranks of programmes on Toei Tokusatsu World to blatently plagiarise Hollywood blockbusters is Pettonton (ペットントン), the third entry in the Toei Fushigi Comedy Series. It starts as many of the Fushigi alien encounter series does… 1) Boy finds alien, 2) Boy inexplicably loses conciousness 3) Boy wakes believing the encounter was a dream, 4) Boy finds it wasn’t a dream and the alien crashes the family unit to much hilarity. In this case, step 4 is put on hold as the boy ditches the alien, or E.T. as they call him and he eats grass and gets sick. He’s taken to a veterinary surgery where he randomly injects himself with something and is miraculously better. Incredulous that his child has failed to appropriately ditch the alien, Dad shoves it on the back of a truck and allows it to be driven away. Stellar parenting and animal care going on here.

The joke is on Dad, though as the alien, Pettonton, find his way back to his home and is chased and attacked by the boy’s mother and grandmother. Resolved to prevent the destruction of Earth, because all mistreated aliens will eventually call for reinforcements and kill us all, the boy, Negita, tries to leave home with Pettonton in tow. This plan comes undone when Dad nearly falls to his death from a balcony, Pettonton saves him and the vet arrives to tell the family what a wonderful creature the alien is. Now, they decide to keep him, obviously. Thrilled, Pettonton swells up like a balloon and he floats up into the sky with a grinning Negita holding tight to him.

This show was an assault on my brain and, honestly, I don’t know how they’re going to drag this out for 46 episodes. Like many of the other Fushigi Comedies, the humour either goes over my head as a non-Japanese native or… it just isn’t very funny. Apparently, a bounty arrives to try and take Pettonton later in the series but, honestly, I don’t think that’s worth waiting for.

If you’re looking for a watered-down, Japanese version of E.T., then this is the show for you. If not… try something else.

Pettonton, as well as all of the other Toei Fushigi Comedy Series, are available to view on Toei Tokusatsu World’s official YouTube channel. There’s lots of much better stuff, too…