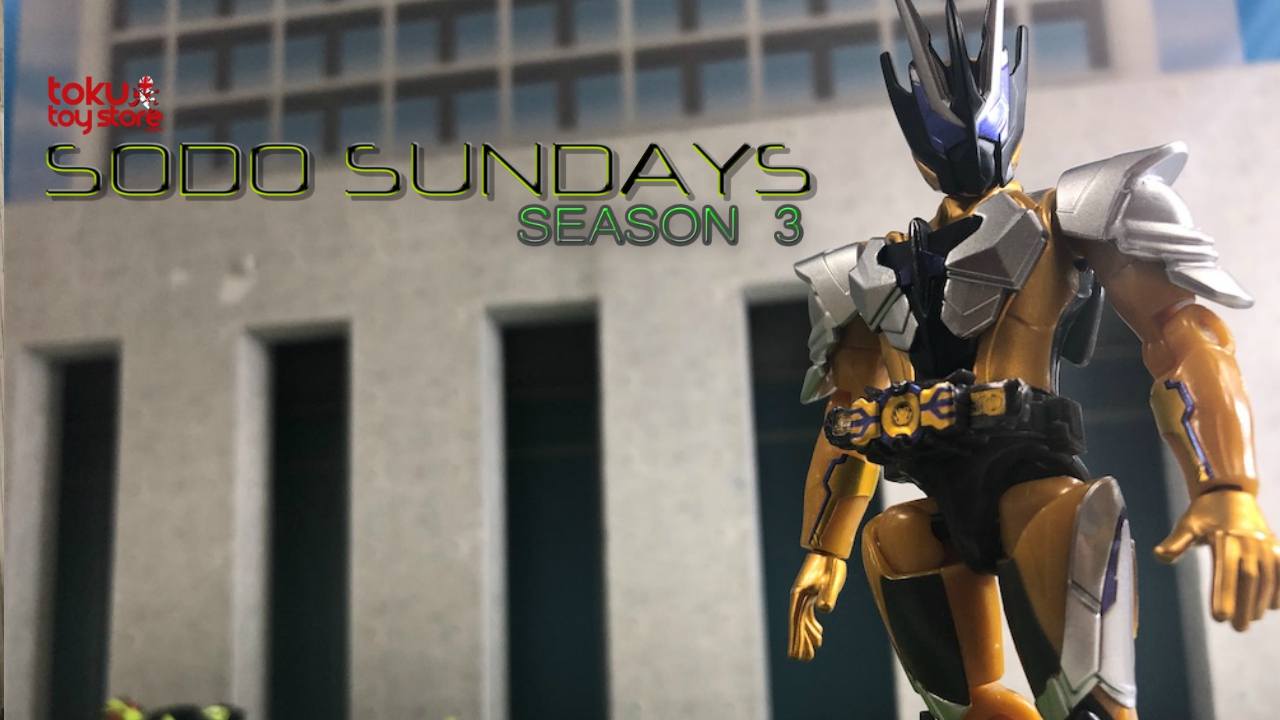 The final figure to be released in AI-04 is Zero-One Shinning Assault Hopper! This figure will be coming with the Ax mode of the Authorize Buster. Set 4 just released in Japan.

Set 5 is kicking off with the newest Kamen Rider, Kamen Rider Thouser. This CEO of ZAIA will be coming with his Thousand Jacker weapon.

There will be a companion set releasing sometime after Set 5 known as AI-05.5. This is a set very similar to the EX Mechanics Set released during Zi-O as this set will be coming with the Zero-One mech suit Breaking Mammoth form and his bike the Rise Hopper.

AI-05 won’t just have Zero-One forms in it. The Kamen Rider Zi-O Ohma Form from the Over Quarterz movie will also be released in this set. Alongside him will be a rerelease of the Kasshin figure from last year’s SODO Plus 2 set. 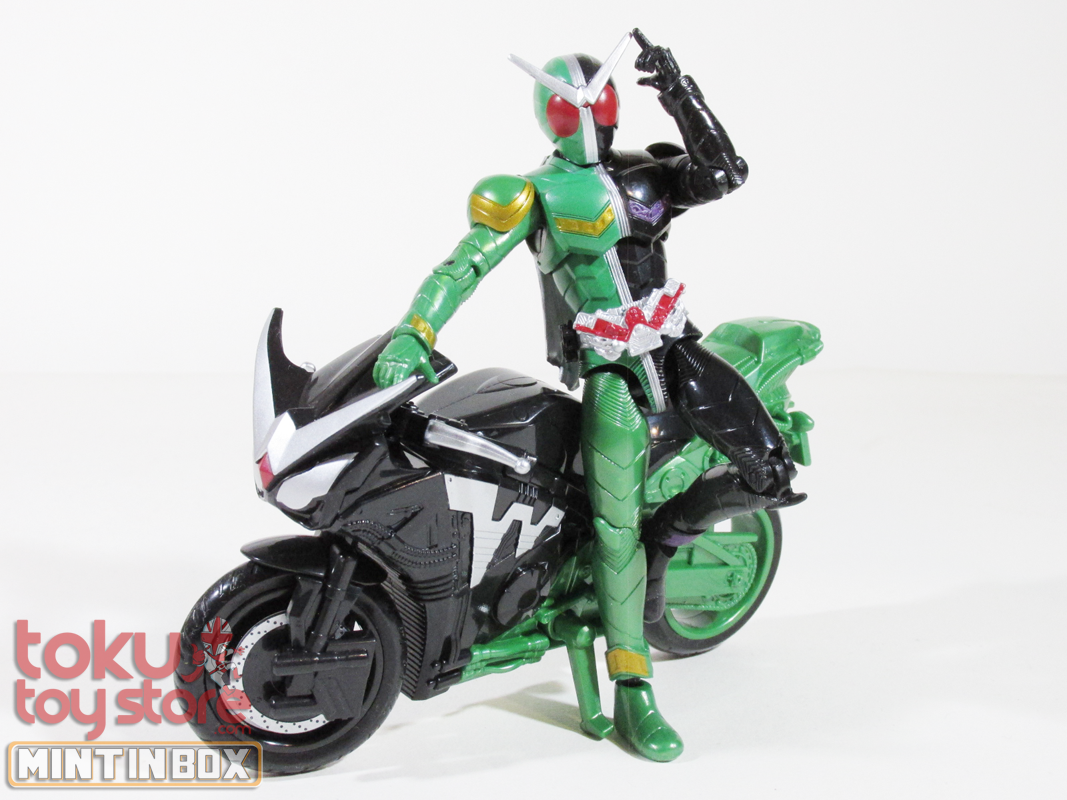 The Rider Kicks Figure series continues into a bold new era with it’s budget gimmick figures. Revving up with a new subline, RKF figures now come with their own signature motorcycles starting with Kamen Rider W and they’re Hardboilder!

Living library Philip (フィリップ) and half-boiled detective Shotaro Hidari (左 翔太郎) are an unlikely pair but fate conspired to drive them together in more ways than one. This pair of unlikely friends form the unbeatable two-in-one detective Kamen Rider W (仮面ライダーＷ)! Their signature Rider Machine is called the Hardboilder (ハードボイルダー)

A full review of the Kamen Rider W & Hardboilder set by Mint in Box Reviews can be viewed here: 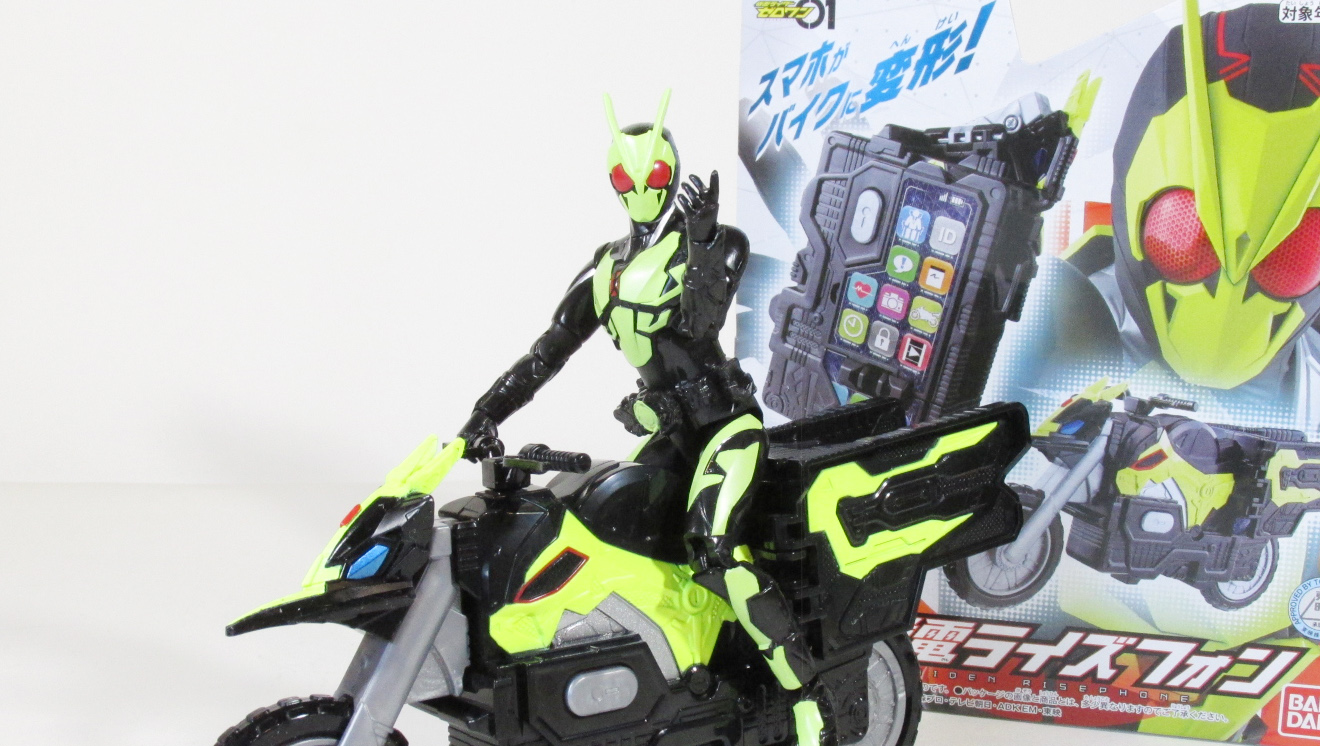 The Hiden RisePhone (飛電ライズフォン) is Aruto Hiden’s personal executive phone and data device as the President of Hiden Intelligence. With it, he can summon the Rise Hopper motorcycle from the Zea Satellite.

A full review of the DX Hiden RisePhone by Mint in Box Reviews can be viewed here: 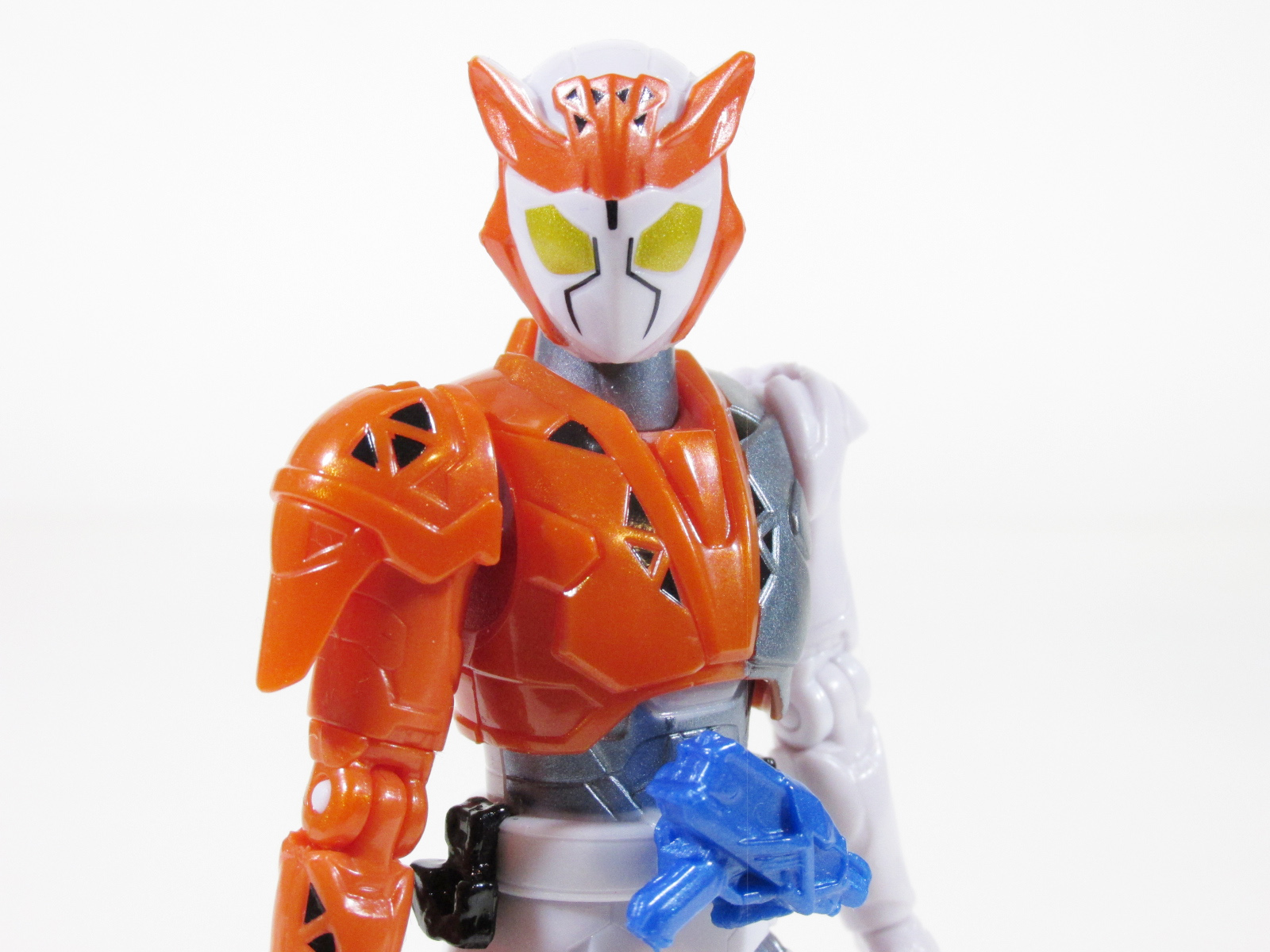 Yua Yaiba (刃 唯阿) leads a conflicted life as a ZAIA Enterprises double-agent and AIMS technical advisor; trying her best to fulfil her duty to both while not compromising her morals. Regardless, she fights to defend humanity as Kamen Rider Valkyrie! (仮面ライダーバルキリー)

A full review of the RKF Series: Kamen Rider Valkyrie by Mint in Box Reviews can be viewed here: 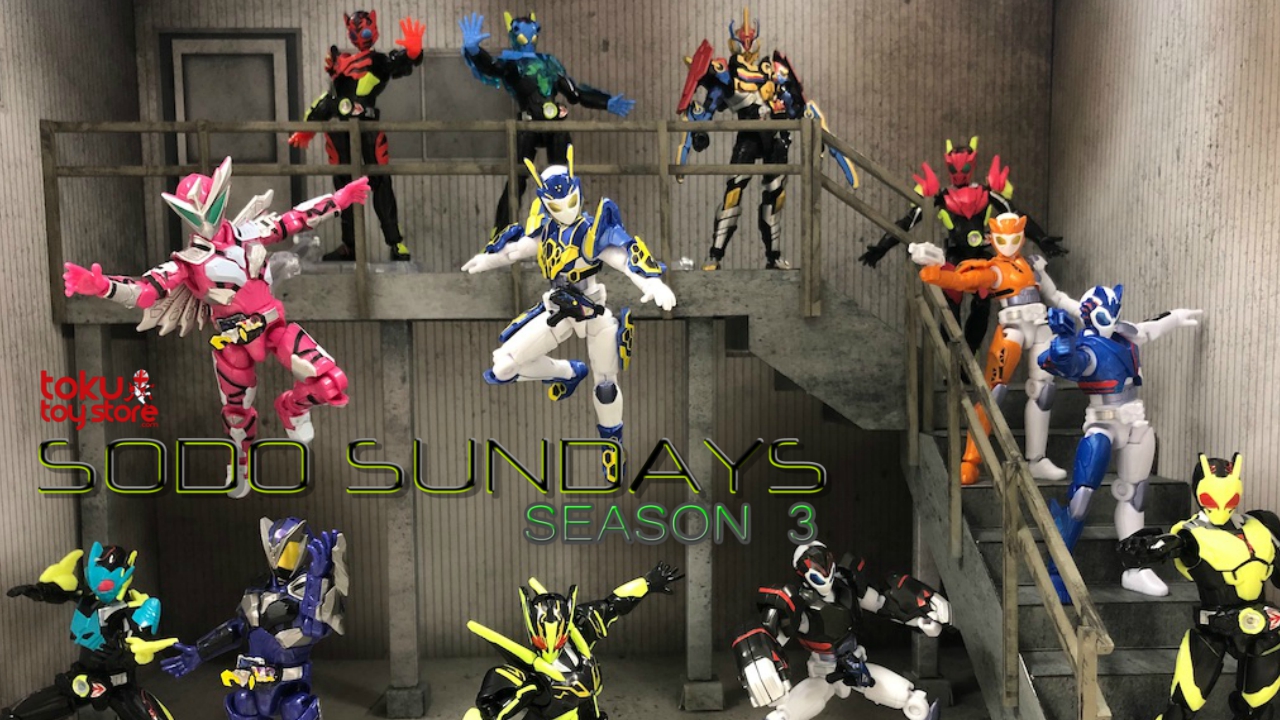 The second figure for AI-04, which was teased a little while back ago, has now been revealed! Kamen Rider Metal Build from the Grease V-Cinema is here! Not only is this going to be the final Build figure released in SODO but he is a brand new mold of the Hazard body that upgrades him into a Dai-SODO figure.

He will be including the Drill Crusher as well as special pieces to make his end of the movie form: Phantom Build.

It doesn’t stop there. Pieces to make a new version of Build RabbitTank Hazard will be in this box as well as the first release of the double Rabbit eyes faceplate which appeared on screen for about 7 seconds.

Kuuga will be the next series to join the SODO Chronicle line! His first set will come with his four base forms or Mighty, Dragon, Pegasus, and Titan form. They confirmed the other of his 11 forms that appeared in the series will be in line at a later date. The weapons also come with the regular versions that he uses to convert them into this arsenal. This set releases in April 2020.

The first Premium SODO Chronicle Set for Den-O has been revealed! This set will come with all three of the forms for Kamen Rider Zeronos, his Altair, Vega, and Zero Forms. Kamen Rider New Den-O will also be in this set!

As always, you can watch SODO Sundays Season 3, Episode 8 as well as a look back at 2019 here:

This will be the final SODO Sundays to be shown on the Toku Toy Store YouTube channel. SODO Sundays will return in early January with new episodes that will be viewable here on Toku Toy Store as well as over on our Facebook page. We hope you’ll join us for more SODO figure news in 2020! 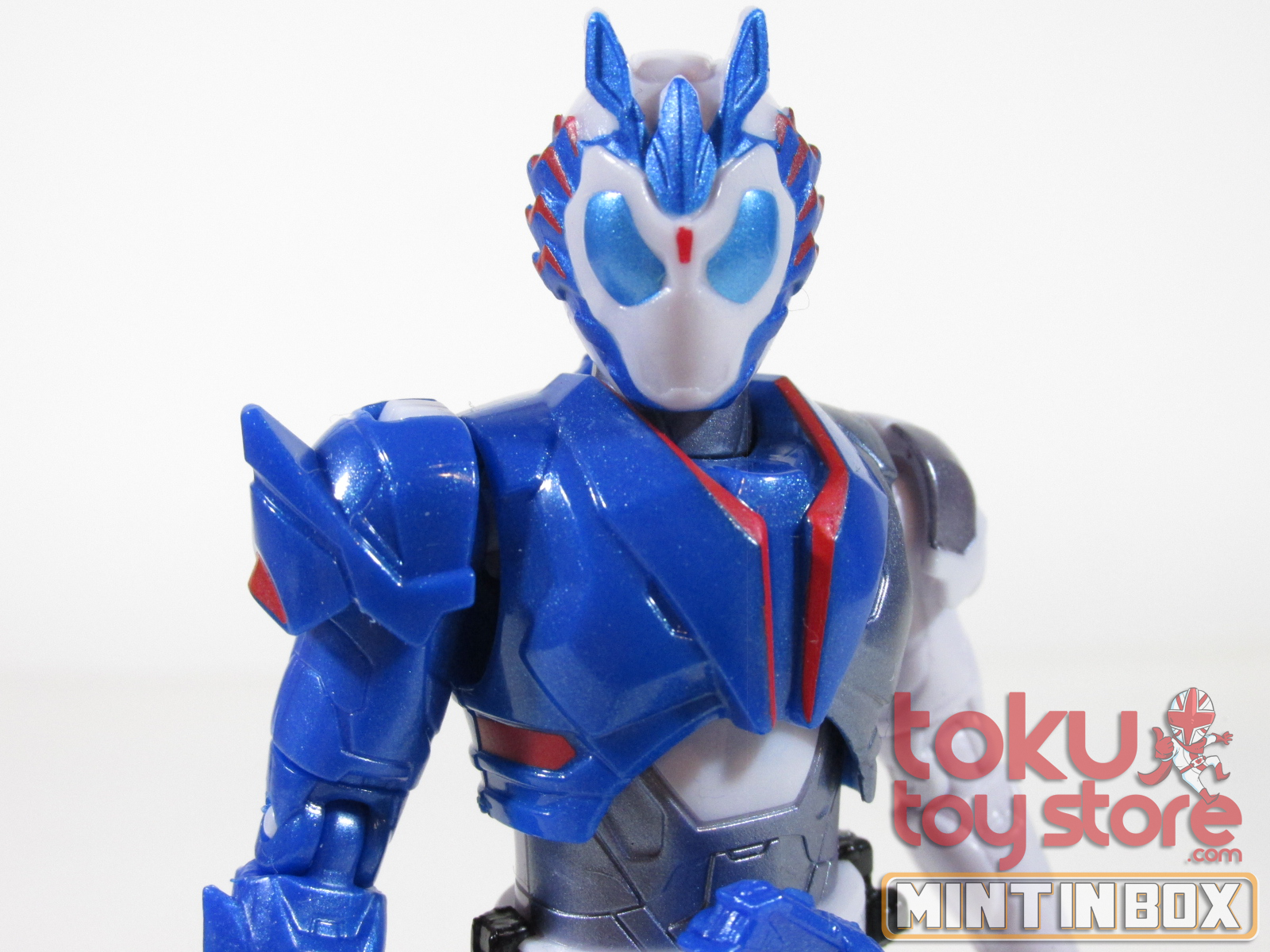 A full review of the RKF Series: Kamen Rider Vulcan by Mint in Box Reviews can be viewed here: 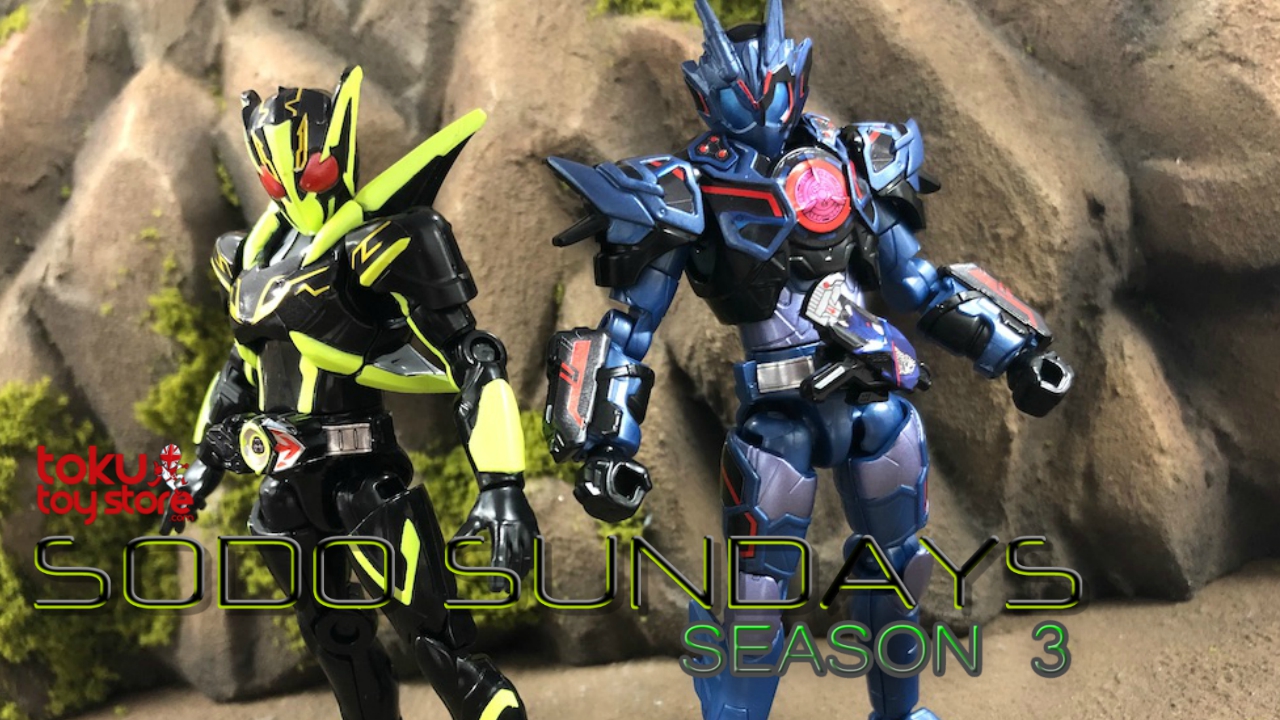 The final figures for AI-03 has been revealed. Kamen Rider Jin will be final of the main five Riders to show up in the SODO line. Like Horobi this figure will come with the Atache Arrow as well as wing effect parts. He is also painted just as nicely as Kamen Rider Horobi was.

Kamen Rider Zero-One’s newest form, Shining Hopper will be joining the line! He like the other figures in the line so far this year will feature a lot of paint detailing on him rather than stickers for a lot of the yellow lines around the suit.

AI-04 has also revealed its first figure as Kamen Rider Vulcan’s Assault Wolf form. This figure will be coming with the Authorize Buster in its gun mode.

Kamen Rider Ikazuchi was teased with the Dodo Sword as SODO is working on fitting this surprise Rider into their release schedule.

Kamen Rider Metal Build was teased to be joining the SODO line at some point in the future. Being the final Build figure for them to do as the main villain of the Grease V-Cinema.

A Premium Bandai SODO Chronicle OOO Movie Set is on the way! This set will come with the 3 Combos of OOO seen in his different movies. This includes Tamashii Combo, Burakawani Combo, and Super TaToBa Combo. Also included are the special effect pieces for Tajadol, Shauta, and Pyutotyra. The Purple Eyed Taka head is also included.

On the next SODO Sundays, the latest Rider series to get the SODO Chronicle treatment will be revealed!

As always, you can watch SODO Sundays Season 3, Episode 7 here: 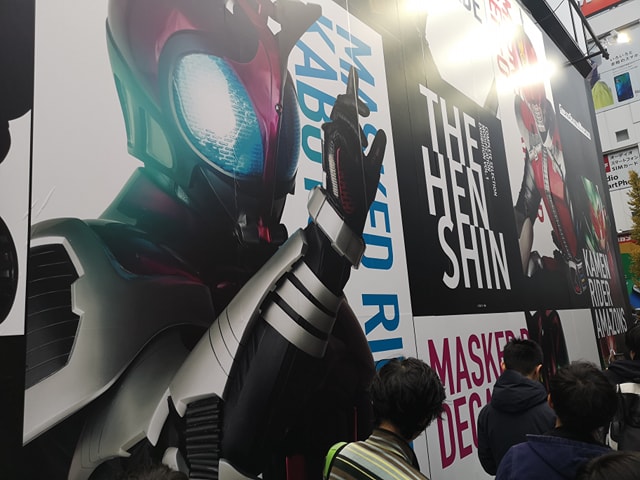 This week, in Japan’s Akibahara district, Bandai Japan held an exhibition to commemorate their line of adult collectable henshin belts and accessories, Complete Selection Modification. In addition to a near comprehensive selection of CSM releases, the exhibition also introduced the concept of “the future of transformation belts”, a special exhibition of “future transformation belt toys,” giving attendees a glimpse into the future plans of Bandai’s toy division.

On their official website, Bandai provided this description of the exhibition:

The CSM series has been developed since 2013 as a complete toy series for adults. From the 1st release “Double Driver” to the 24th “Amazons Driver” will be displayed together with the world view of the work, and a reference exhibition of a new lineup will also be held. In addition, the latest CSM work that will be announced at the eve of December 6th will also be exhibited at the fastest.

As we announced on our Facebook page last night, the “latest CSM work” announcement they are referencing was for the Complete Selection Modification Kivat and Tatsulot devices from Kamen Rider Kiva. As promised, these items were on display in the exhibition too.

Thanks to one of our customers and supporters, Drew Hurley, we are able to provide you with a gallery of images from inside the exhibition. We’d like to express our supreme gratitude to Drew for sharing his images with us. 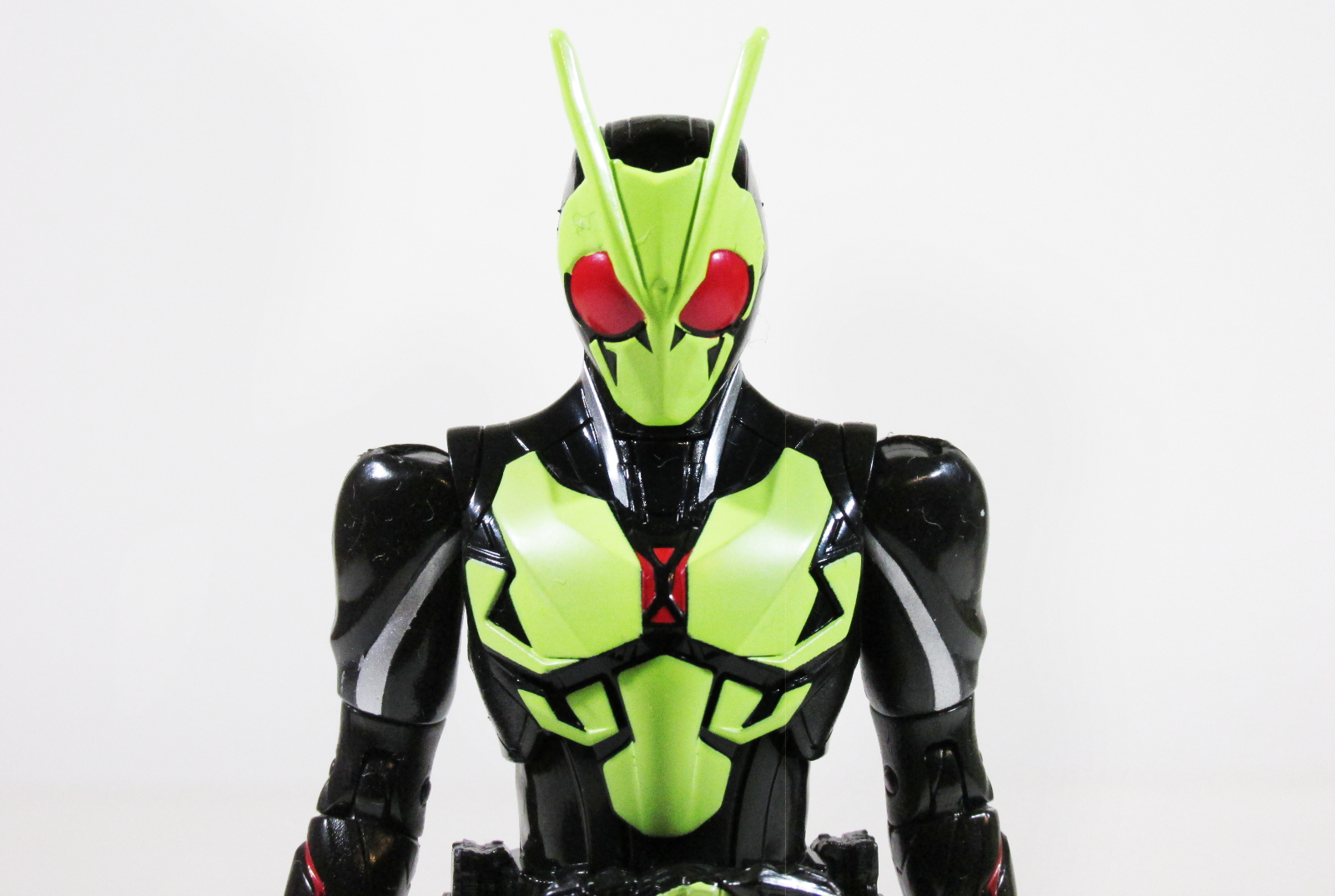 Aruto Hiden (飛電或人) would-be comedian and heir to Hiden Intelligence, inherits his grandfather’s company and must fight to save the good name of his family and the reputation of the AI-based life forms they produce. To fight the malignant force of MetsubouJinrai.net (滅亡迅雷.net), he must fight as Kamen Rider Zero-One (仮面ライダーゼロワン)!

A full review of the RKF Series: Kamen Rider Zero-One by Mint in Box Reviews can be viewed here: 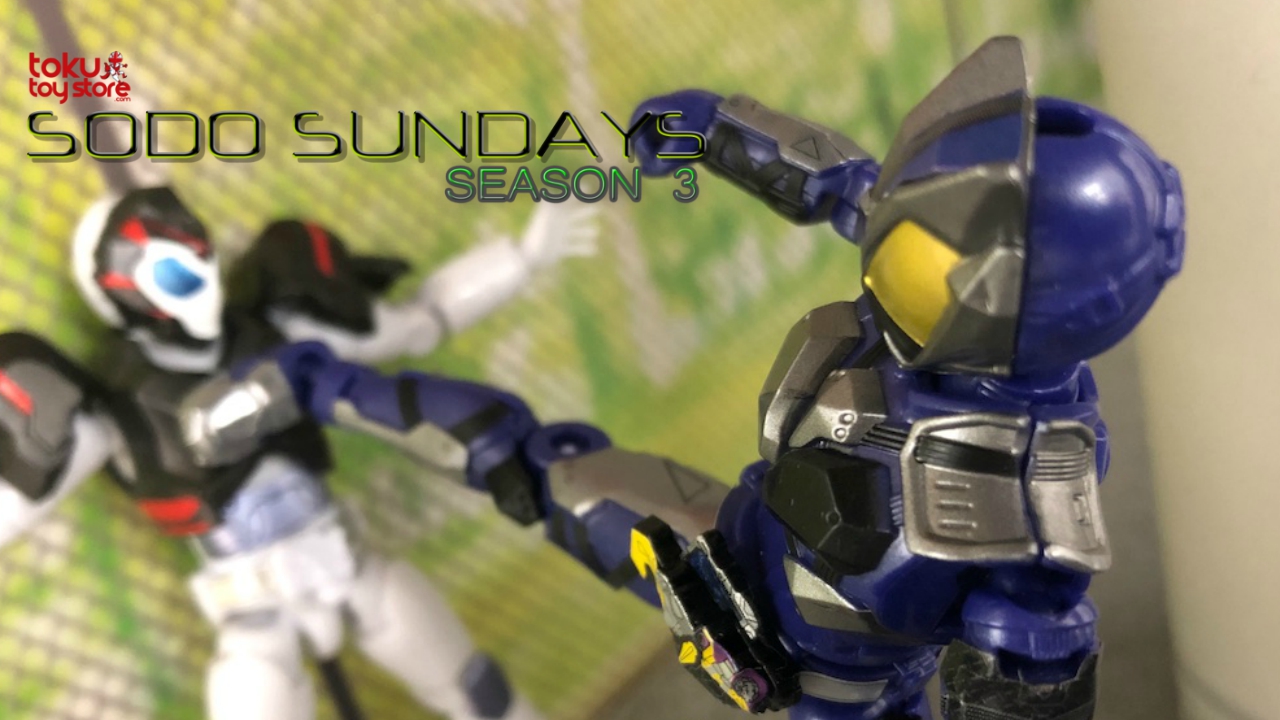 The first two figures for AI-O3 (December release) have been revealed! First up is Kamen Rider Valkyrie in her Lightning Hornet form. This figure will also come with the Attache Shotgun for her or Kamen Rider Vulcan to use. Continuing in the trend of Zero-One SODO being well painted there is not a ton of sticker work to be done with this figure either.

Kamen Rider Horobi is next up in this set. To limit stickers on the legs not looking good the decision was made to just paint the entire legs as well as the chest and most of the head so this figure really doesn’t have many stickers at all! He comes with the Attache Arrow weapon too.

The next Set in the SHODO-X line will be out in March 2020 and the lineup has been revealed. Kamen Rider Stronger will be in this set along with his Charge-Up powered up form and his bike the Kabutolaw.

Kamen Rider Blade will be the big highlight in this set though. He comes with his Blade Rouzer and effect parts for card-holding hands and effects for the cards used in his Rider Kick finisher.

As always, you can watch SODO Sundays Season 3, Episode 6 here: