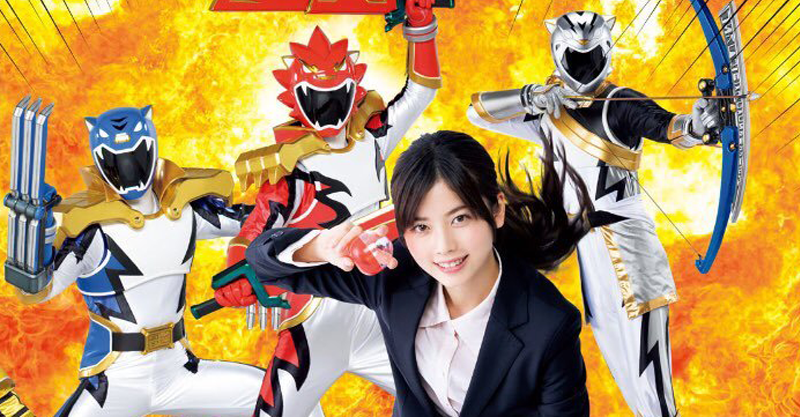 Channelling the fandom troubles of geeks and nerds everywhere, Tokusatsu GaGaGa was a series that kept us feeling gaga from start to finish.

We’ve all seen Akibaranger, right? I feel confident making that statement to the toku-watching community as a whole and, at the very least, you’ll be aware of it’s themes or those wacky GIFs of the “Powerful Rangers”.

So what if I told you that there was a show that captured the toku otaku experience even more-so than that? A show that dealt with tokusatsu as a fandom, fandom as a stigma, camaraderie, societal and familial pressures, and living up to the ideals that inspired us as children?

That show would be Tokusatsu GaGaGa; an adaptation of the Niwa Tanba manga of the same name that follows Kano Nakamura as she navigates her mid-20’s in a serious career while hiding her geekiness from her co-workers and family. It’s a very engaging story for me personally but I think it’s broader implications are what make it stand out amongst the J-Dramas aimed at people who like rubber monsters and explosions.

Simply put; Tokusatsu GaGaGa is about feeling ‘other’ in what most would define as ‘regular’ society. It’s about hiding something core to your self-identity out of fear of rejection, being ostracised by your peers, or as just being too childish, something many in the Western toku fan base has bemoaned when Power Rangers is derided in mainstream consciousness.

These themes are explored in the show in a number of different and unique ways, from metaphorical cuts to the in-show Sentai and Metal Hero series (Bestial Storm Jushowan and Emerjason, respectively), delusional instances of superheroes appearing to Kano to inspire her, or how certain characters compare experiences in differing fandoms. [Warning: Character and Plot SPOILERS AHEAD]

Lead actress Fuka Koshiba, and the rest of the cast to an extent, excel in bringing to life these relatable characters and making their respective journeys truly engaging. Kano Nakamura is a fantastic character who and the expressiveness of Fuka’s acting highlights both her dramatic and comedic elements. Frankly, I’d love to see Fuka in a proper Toei show, she’s got the chops to be a fantastic Sentai Red.

Joining Kano are “Sentai Sempai” Hisami Yoshida, an older sister-type with a fondness for butts. Her relationship with Kano is sweet and almost borders on the homoerotic sometimes and I honestly can’t tell if that’s intentional or I’m just reading too much into the long, lingering looks that they share frequently. I’m just saying, this show is already one big analogy to being LGBTQ+, I wouldn’t put it past author/directorial intent (I haven’t read the source material to confirm if it’s like that there) that it is.

There is also “Stoic Idol Fan” Yuko Kitashiro, Kano’s hard-nosed co-worker who hides a love of J-Idols The Bee Boys behind her Aubrey Plaza-esque looks. “Mr Yakuza” Masaaki Matsumoto, a crunchy-on-the-outside, soft-on-the-inside shop owner who feels great shame for his love of magical girl shows and “Damian” Taku Tamiya, a cram school kid who befriends Kano and acts as a mirror to Kano’s own childhood experiences. Each highlights an aspect of her personality and allow us to explore Kano’s views on life.

There are other ancillary characters who act as plot points or comic relief but the only other character of note is Fumi Nakamura, Kano’s mother. Often represented as the ever-present villain of Jushowan, Genka Shogun, Fumi is an over-bearing traditional mother who projects her values onto her daughter and much anxiety ensues. This is an experience that I’ve had and I’m sure it’s something many who love superheroes into their adulthood have had to deal though with the genre becoming more mainstream, this is being mitigated somewhat.

Kano’s arc with her mother is pretty compelling and you almost begin to sympathise with Fumi until a fateful lunch date when she goes too far and then IT IS ON. Seriously, there’s a moment in episode 6 that made me scream “Get ‘er, Kano!” as the show’s theme song (performed by Golden Bomber, whose lead singer performed Life is SHOW TIME) kicks in and it’s absolutely brilliant.

In terms of being a tokusatsu, there’s plenty of references, homages, and production details that call back to the long history of toku in Japan. Cameos of suit actors, beloved voice actors, and the action director himself being a suit actor alumni all give this show a pedigree to rival that of any official Toei production (Toei did lend their aid to this NHK production though to what extent, I don’t know). The suits look just as good as something Toei themselves would produce and I would definitely watch an Emerjason show!

I heartily recommend checking out Tokusatsu GaGaGa if you’re looking for something out of the usual toku shows that has a lot of heart and a genuine love for the genre. The 7 episode show was subbed by both Big Nova Subs and TV-Nihon and can be found wherever you’d usually find fan-subs.

Have you seen Tokusatsu GaGaGa? What were your thoughts on it? Let us know!