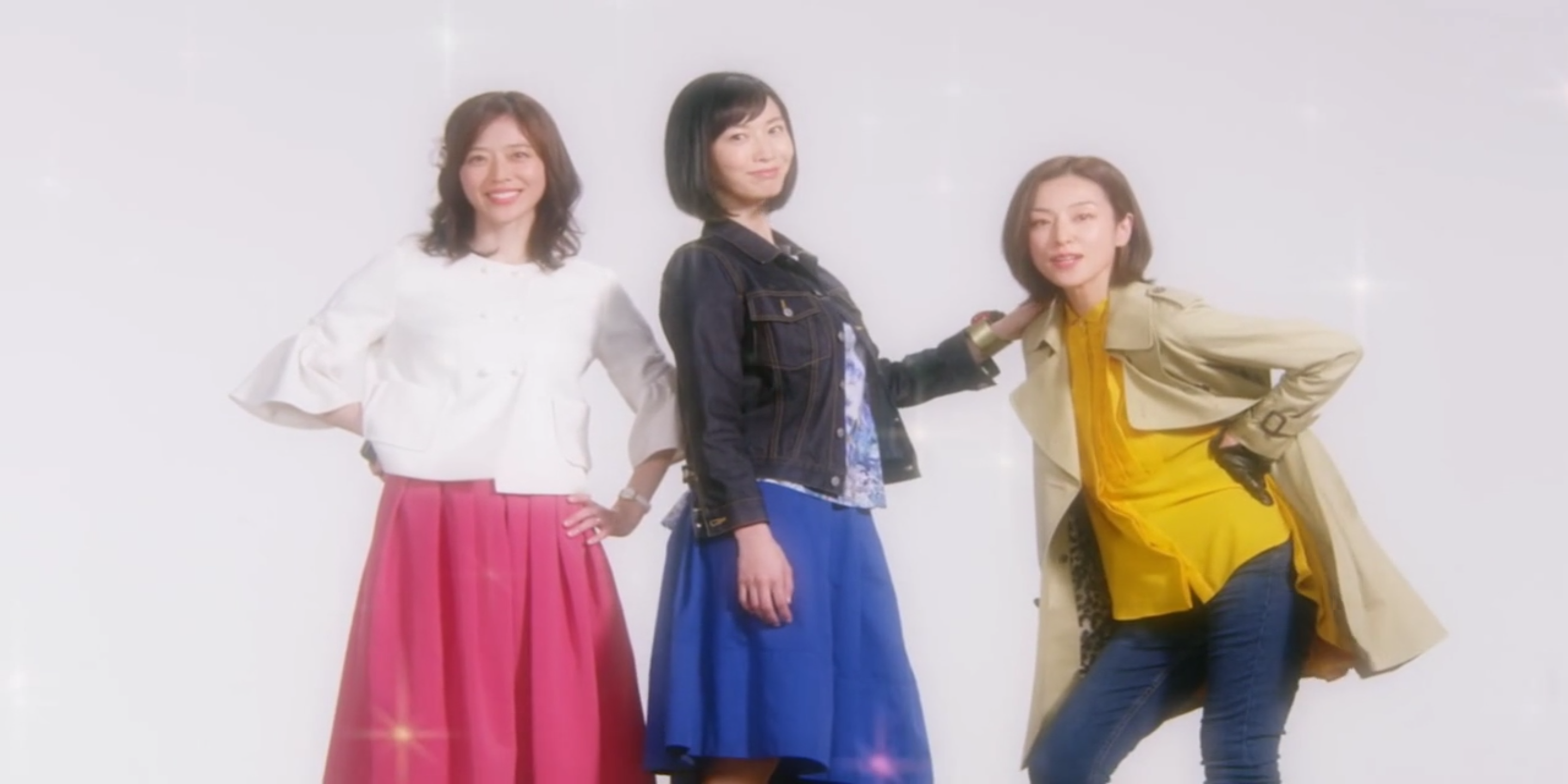 Hero Mama League consists of Nono Nakami (Hurricane Blue), Reimon Marika (DekaYellow) and Ozu Houka (MagiPink). As we open the series, all three have married and become mothers, with children all around the same age who attend the same preschool. The film is short, only about 16 minutes long, but channels parts of both Super Sentai and the American film Bad Moms, as the group tries to flirt with the preschool teacher and then laments the fact that he thinks they look tired. Over coffee, the three of them talk about motherhood, including various over-the-top modifications made to their hero gear or uses for their weapons to calm their children down. As the hero mamas talk about ways to save time doing chores, an alien ninja called Demost creates an army of Mecha Nin Insects using a new type of Ninpo, and prepares to unleash the force on Earth.

The discussion of time goes so far as to have DekaYellow transform before leaving the restaurant to go fight aliens. Her time saving plan fails, leading to the role call needing to be repeated, and she comes back looking more drained than before. This is repeated with MagiPink, though she adds in stories of chores during battle getting her hurt and ruining her husband’s shirt.

When the discussion ends, they emerge from the restroom to find the attack has begun, and vow to stop it without time saving tricks or cut corners. The Hero Mamas enter the battle, but it cuts to Demost, defeated, and we are told that the rest of the story will be shown in a V-Cinema special included with Uchuu Sentai Kyuranger vs Space Squad.

Overall, Hero Mama League is definitely a series targeted at the mothers of children going to theatres to see Super Sentai films, or watching at home with their children, and ends on a message to inspire and empower said mothers. It is a positive message overall, even if the film itself is a little lacking in substance. If you are a fan of these characters, though, this film may be worth a watch for you. You can find Hero Mama League Operation 01 available now, subtitled in English through Tv-Nihon.

What did you guys think of Hero Mama League? Leave a comment and let’s discuss!

Now it might seem silly to even debate this point. The title of the show is “Masked Rider” after all. However, this has been something that’s bugged me slightly ever since Samurai Flamenco brought it up in the first episode: Is Kamen Rider’s mask actually a mask or is it a helmet?

The definition of mask in this context refers to something that covers all or part of one’s face and while a Kamen Rider’s “mask” certainly does that it doesn’t stop there. The whole of their head is covered by a protective layer which would also make it a helmet.

Now we can argue this point back and forth but what does it mean either way? Well, if a Kamen Rider’s mask is actually a helmet then they’ve been lying to us all and can they really be considered true heroes of justice if that’s the case?

On the other hand if it really is just a mask then they’re riding motorbikes without a helmet and as Samurai Flamenco points out. This is hardly fitting behavior for a hero and doesn’t set a very good example.

Then of course we have Riders like Shin and Hibiki who don’t wear either, though in Shin’s case he doesn’t really ride a bike and neither of them are that well liked either so maybe they’ve already received their punishment for their heinous crime. We may have gotten those Shin Kamen Rider sequels if only he’d have obeyed traffic safety laws…

There’s also the issue of how Kamen Riders even see out of their masks. Both versions of Birth seemed to have an Iron Man style set up in theirs but Heads-Up Display (HUD) was hardly a thing in the Showa period and those big compound eyes don’t make for the clearest of viewing mediums – unless you want to see several dozen of the one thing you want to look at.

So what do we take away from this conundrum? Is it that sometimes even heroes have to blur the lines of morality at times to preserve peace? Or is it that “Masked Rider” Sounds cooler than “Helmeted Rider” and it’s best not to read too deeply into a kid’s show?

It’s probably that last one.

What did you think of this ramble? Do you consider it a mask or a helmet? Let us know in the comments.