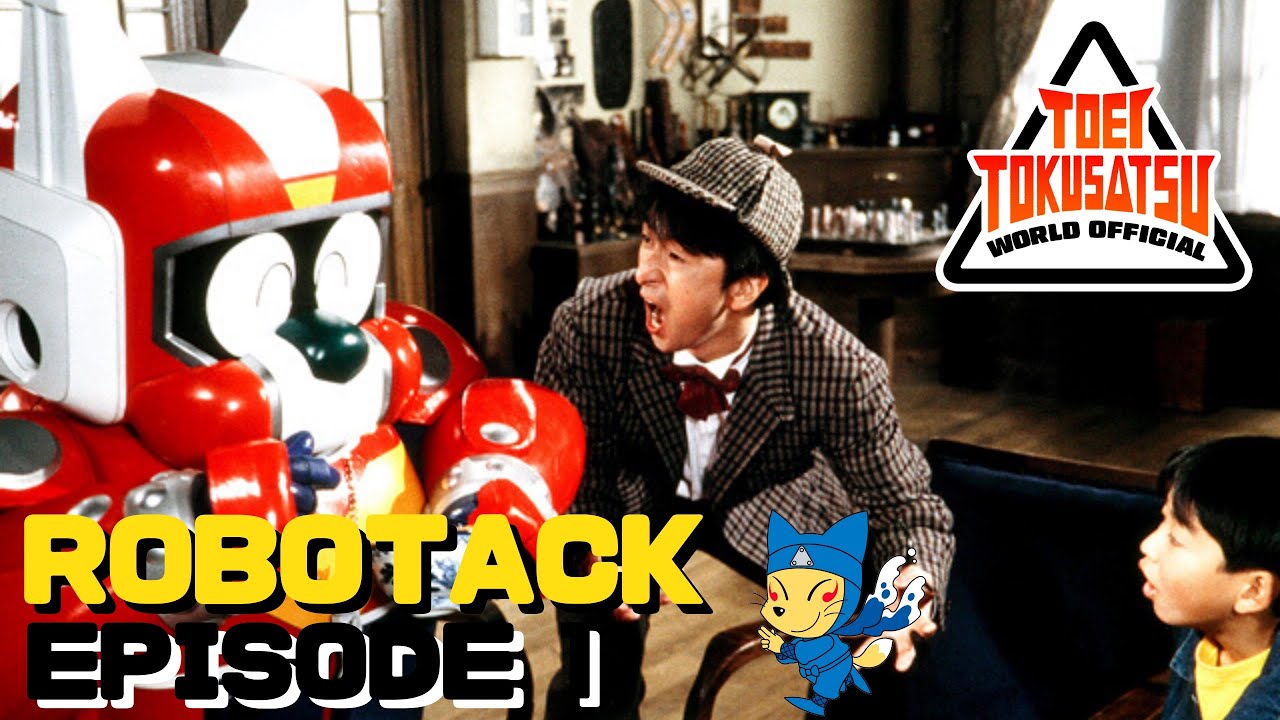 Robotack begins as most of these robot buddy programmes do… without any context as to where the robots came from. This one is a dog and a detective as well, though, so I guess everything is alright? Tetsuwan Tantei Robotack (テツワン探偵ロボタック) is actually the last of the Metal Hero Series’, bringing to a close the franchise after seventeen series. It was a sequel, somewhat, to its predecessor B-Robo Kabutack in that some of the characters carried over and the cute, loveable, small bots can transform into larger fighting machines but, from what I gather, the similarities pretty much end there.

The premiere begins with the titular character, Robotack, roaming the streets in search of food. He stumbles into the office of the Shardock Private Detective Agency where the agency’s president, Kaoru Sugi, is also hungry and begging money from his nephew, Kakeru Yukiyanagi so that he can order takeout. Now indebted to Sugi, Robotack joins the detective agency. This begins to work in Robotack’s favour quickly as young Kakeru resolves to help the robodog with his mission: find the Land Tool, the secret treasure of the Harappa Land.

Robotack and Kakeru happen upon a clue in the search for the Land Tool while on an errand of Sugi but, in the same vein as Kabutack, they are thwarted by two other robots called DarkCrow and Kabados and are whisked away to undergo a trial in order to earn the Congra Trophy, essential trinket fodder to find the Land Tool. In charge of the challenge is Master Ranking, a Ganesh-like elephant robot, who will award the winner of the Ranking Game with a trophy and dole out a failure game to the loser.

In order to help them complete challenges, the robots can Magnet Change into larger, more nimble forms. The evil robots seem to be able to do this at will, for a limited time, but Robotack’s transformation is linked to an instrument called the Magnet Flute. More will become of that as the series progresses, I’m sure.

Robotack is another in the line of fun-loving buddy robot tokusatsu that we’ve looked at a lot during these Toei Tokusatsu World Reviews. I think, at this point, you either like this style of show or you don’t. They were clearly very popular with Japanese audiences because they just kept them coming! Robotack, much like Kabutack, had some cute, colourful characters that were designed to sell toys. I’d say it’s worth a watch especially for those keen to watch all of the Metal Hero Series.

You can watch Tetsuwan Tantei Robotack and all of the other Metal Hero Series (that weren’t adapted by Saban) on the Toei Tokusatsu World Official YouTube channel. 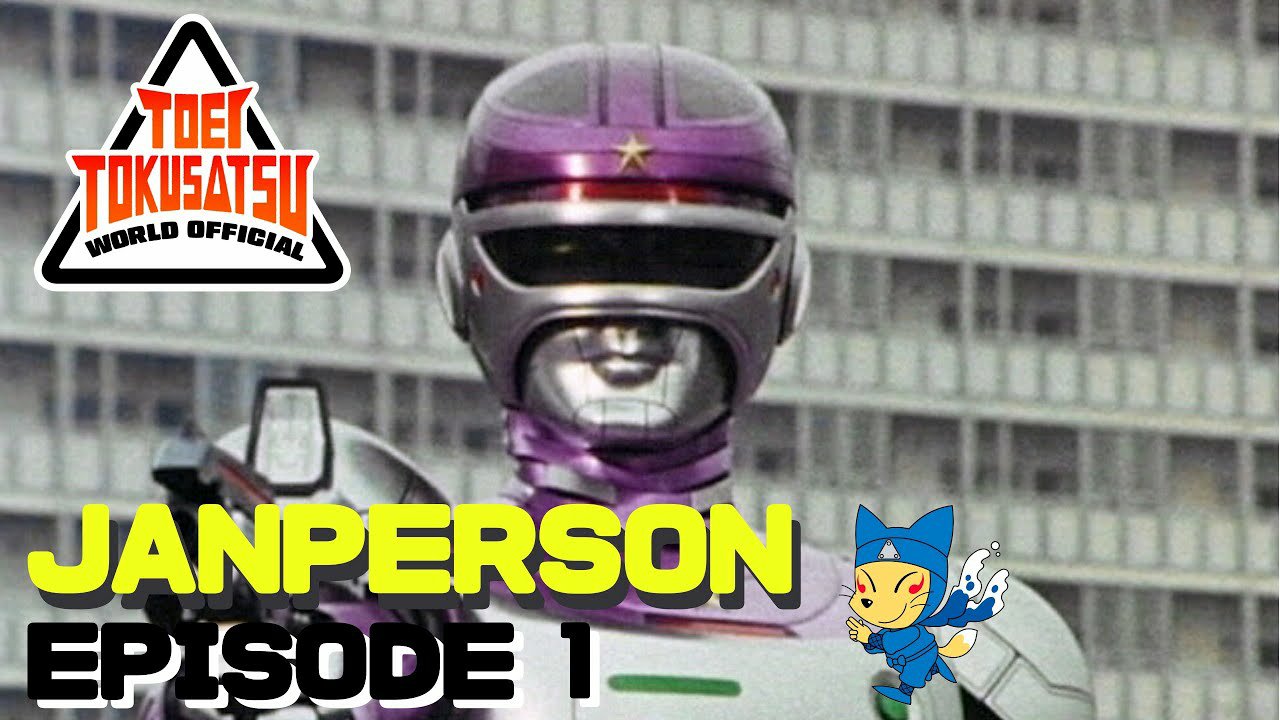 The Toei Company sure love their robot detectives and police officers, especially in the Metal Hero Series, and so here’s another one: Tokusou Robo Janperson (特捜ロボ ジャンパーソン). Unlike other Metal Hero Series, and tokusatsu in general, Janperson doesn’t follow the usual monster of the week format with the title character instead opposing semi-regular criminal forces, including three crime syndicates over the course of the series. Janperson is more like a cop drama than a tokusatsu but has a sentient robot, augmented villainsm, mecha and lots of explosions, so it is a tokusatsu. Got that? Good.

When Janperson arrives on the scene, we see that he is completely robotic. This doesn’t mean he doesn’t transform, though… the robot cop takes off his jacket and puts on a mask! Dramatic stuff. Speaking of dramatic (although genuinely moreso in this case), the three cyborgs that oppose our hero in episode one – members of the evil crime syndicate, Guild – throw two burning cars at him. Janperson catches them, forces them apart and walks through the fiery, dilapidated machinery to continue the fight. Our hero.

The villains in this programme, or at least the first episode, leave a little to be desired in my book. The three brooding cyborgs that wreak havoc in this episode do so without any explanation and mostly just stare blankly at people while their arms flay open and shoot people. They shoot little rocket bullets from their mouths, too, but this effect is poorly executed and would have looked out of place in the earliest fifties tokusatsu, let alone in the nineties. I can’t be alone in wanting the villains to get a little exposition in the opener that explains why they’re trying to kill us all. It’s the least they can do before getting all homicidal, frankly.

The special effects and villain choreography are a little dated, especially for a 1993 production, but this isn’t too jarring and can be chalked up as the chuckleworthy kitsch regular toku viewers will be used to. Something else toku fans may be used to is the amount of kit that Janperson has to do his job. With over 15 weapons and a couple of vehicle mecha in his arsenal, there are obviously a lot of toys available for this series… a lot.

The soundtrack continues in the tradition of music in the vein of seventies and eighties American cop shows like CHIPs and Hawaii Five-O but there’s also a fairly blatant cover of the Star Trek: The Next Generation theme song in here, too; as both a massive trekkie and a massive otaku, I appreciated it… but it’s very cheeky!

Should you be watching this series? Probably. If you enjoyed the other cop based offerings of the Toei Tokusatsu World Official YouTube channel, like Exceed Draft, Robot Detective, Jiban or Blue SWAT, then you’re going to like this. At the same time, the cop motif, especially the robot cop motif, is a little done in the Metal Hero Series and I’d forgive you for seeking out something a tad more unique.

Tokusou Robo Janperson is one of the many, many cop based Metal Hero Series available on the Toei Tokusatsu World Official YouTube channel. The first few episodes are ready to view with English subtitles.