The Kyoryuger love never ends! Zyuden Sentai Kyoryuger has an online episode that ties in with a mobile game!

As if Zyuden Sentai Kyoryuger wasn’t popular enough, they’ve gone and partnered up with the mobile game “Brave Frontier” to bring us a new episode that ties directly into the game!

Episode 33.5 is titled “This is Brave! The Battle Frontier!” and acts as a special tie-in episode with the mobile game Brave Frontier 2, which is to be released on February 22nd. The episode brings the Kyoryuger cast together after five years!

This also marks the second Kyoryuger spin off alongside Zyuden Sentai Kyoryuger Brave, the Korean counterpart to the dina-bite story!

The cast even appeared in a very nicely done promotional trailer for the game itself, showing off their latest *ahem* .. attire.

Do you think any other Super Sentai seasons would make an excellent promotion for a video game? Leave us a comment and we’ll take it directly to Toei! (not really) 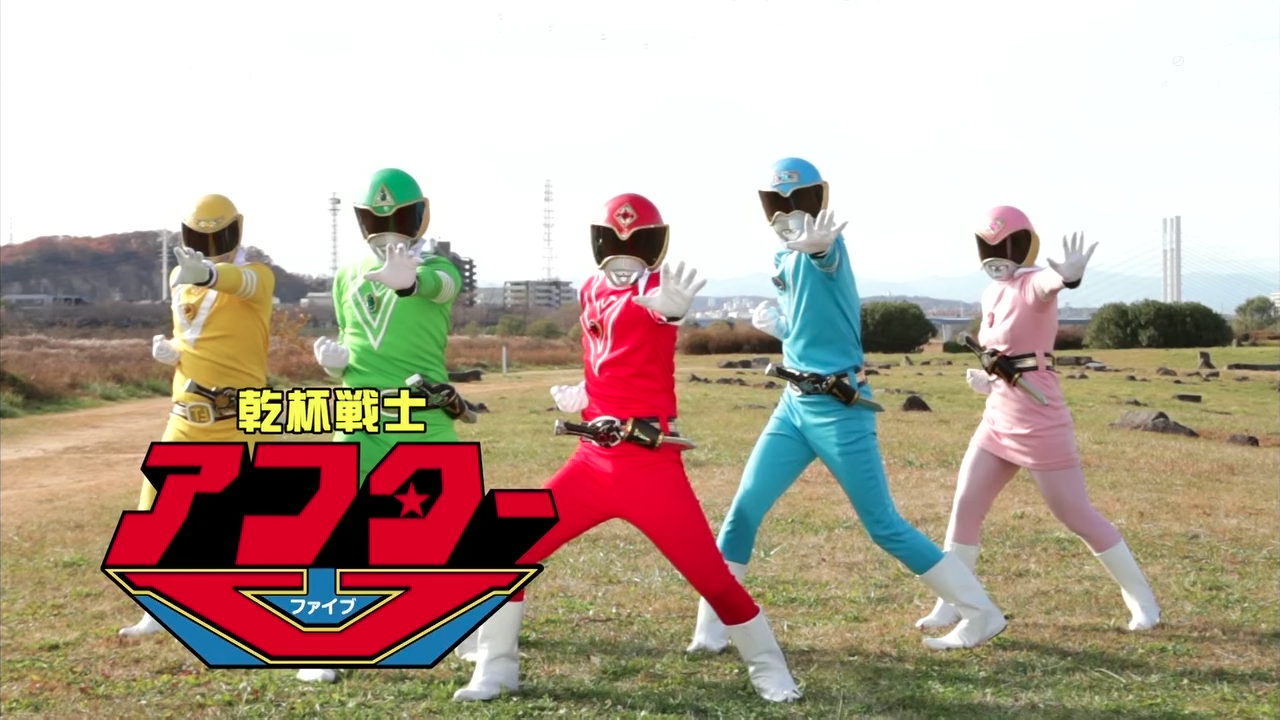 More specifically, the show parodies Super Sentai and focusses on the aftermaths of the battles rather than the battles themselves. In this world, our team of heroes is an official body much like Gorenger, Sun Vulcan and Ohranger. Many of the team, Pink especially, treat it like a run of the mill civil service job.

Each episode focuses on the after work drinking parties of our heroes as they discuss the day’s events or just things about their jobs that they’ve noticed, like how monsters have zips on their backs or someone wires pyrotechnics up in their battlefields before they get there.

The show also features the villains of the rangers who staff the restaurant that our heroes start the night in and, once that’s closed, follow them to the karaoke bar they frequent. We get to see how the villain’s commander isn’t really so evil despite his insistence and how he can genuinely care for his foot soldiers and even, to an extent, the rangers.

As a tokusatsu parody series and doubly so as a Super Sentai parody, it’s impossible to talk about After V for any length of time without comparing it to Hikonin Sentai Akibaranger which started in 2012. Personally, I prefer After V to Akibaranger (and I know saying that is tantamount to sacrilege). I find the “in universe” setting to be better for parodying the genre as opposed to the “real world” one Akibaranger started out with.

There’s only so much you can do with the premise of: “Hey this is a thing Sentai does a lot” and Akibaranger unfortunately uses that ad nauseam; it’s not that there aren’t plenty of jokes to be made with it but it can get a little stale. After V, on the other hand, takes the world implied by the genre itself and uses the premise of “What if Rangers were real and it was a job people could do?” This allows the show to take advantage of a much more diverse range of jokes in the process, like Pink’s constant skipping on the bill, for example. The humour comes not from them pointing out characters or things we recognise but by putting absurd characters like Sentai heroes and villains in a mundane situation and having them talk about their battles like it’s a day job.

If you’re an older fan of Sentai and/or Power Rangers or just a fan of the older shows like I am, this series will have you in stitches. While it’s not as ambitious or polished as Akibaranger was that works in it’s favour. It has a good low budget appeal that exaggerates the low budgets of the Sentais of yesteryear while still being respectful to the source material. Kanpai Senshi After V is subbed my MegaBeast Empire and I would highly recommend it to everyone.

What did you think of Kanpai Senshi After V? How do you think it compares to other comedy tokusatsu shows?