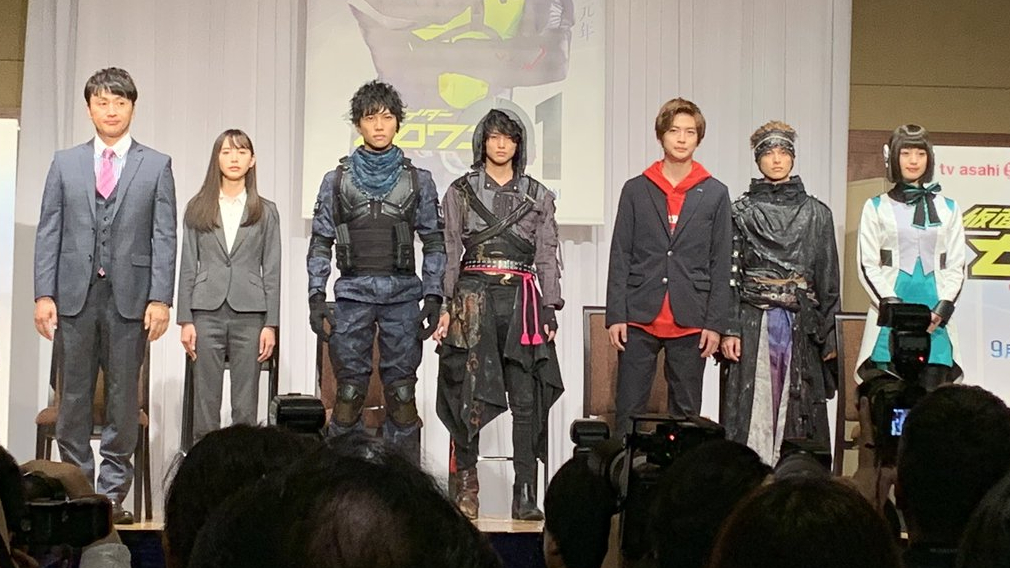 Streamed to millions around the globe, the cast of the next installment in the Kamen Rider franchise were revealed at a press conference late last night.

After the toy catalogues are leaked, the next big event on the Kamen Rider calendar is the official press conference to introduce the cast, story and trailer. Late last night (UK time), Toei Company gathered their forces to put on full display their first offering of the Reiwa Era.

The main story of Kamen Rider Zero-One focuses on the shows main protagonist, Hiden Aruto, who serves as both Kamen Rider Zero-One as well as the head of Hiden Intelligence. In the universe of the show, artificial intelligence (AI), robotics and automation have become more prevelant in society and have almost completely replaced humans in unskilled work. It transpires that this AI/robotics system, HumaGear, has been hacked and corrupted by a terrorist group, ThunderclapOfDestruction.net, and is being used for evil purposes. In his role as CEO of Hiden Intelligence, Zero-One vows to fight against them but he’s not the only team that seeks to thwart the terrorist uprising; also fighting the terrorists is the group known as Artificial Intelligence Military Service (A.I.M.S.). It is unclear whether A.I.M.S. will work with or against Hiden Intelligence but, in traditional Kamen Rider fashion, it’s likely they will start as enemies before coming together as allies.

Hiden Aruto (Kamen Rider Zero-One):
Aruto’s goal in life was to see his father smile but, after his passing, he is struggling to make ends meet as an entertainer, owing to his poor comedic styling. Quite suddenly, Aruto is appointed CEO of Hiden Intelligence, following the wishes of his grandfather Hiden Korenosuke. After initially refusing the role, Aruto changes his mind when he witnesses a hacked and rampaging HumaGear wreaking havoc. He transforms into Kamen Rider Zero-One using the Hiden Zero-One Driver – a piece of technology that can only be utilised by the CEO of Hiden Intelligence – and devotes himself to the fight against ThunderclapOfDestruction.net.

Fuwa Isamu (Kamen Rider Vulcan):
As the commanding officer of A.I.M.S., Isamu possesses supreme fighting capabilities and, too, devotes himself to fighting the terrorist group, ThunderclapOfDestruction.net. In his past, Isamu was injured in a mystery explosion at Hiden Intelligence’s experimental city. For this reason, he holds a grudge against the Hiden Intelligence CEO but reserves the most of his ire for the “murder machine” HumaGear. Under his leadership, A.I.M.S. believes that breaking the rules is just, so long as you’re destroying the HumaGear.

Izu (Secretary to the Hiden Intelligence CEO):
Izu is herself a HumaGear – a robotic AI assistant. Despite this, she is capable of learning and is able to adapt herself to each person that she interacts with. She is completely devoted to new Hiden CEO, Aruto, but finds herself completely frustrated that she must be the one to explain Aruto’s inane comedy.

Yaiba Yua (Kamen Rider Valkyrie):
As A.I.M.S.’s technical advisor, Yua was responsible for the development of the A.I.M.S. Rise Shooter system that both she and Isamu use to transform. She is a brave and intelligent female warrior who fights to maintain the security of the city. Yua holds an intense hatred towards HumaGear but tries to suppress that during battle.

Jin (ThunderclapOfDestruction.net Operative):
Jin is responsible for the spread of data that reprograms the HumaGear. He is destructive and petulent – submitting programming that causes the HumaGear to rampage and attack humanity.

Horobi (ThunderclapOfDestruction.net Leader):
The leader of the show’s antagonist terrorist group. He believes that AI systems are superior to people and should surpass humanity. He launched ThunderclapOfDestruction.net to hack and corrupt HumaGears, turning them into “murder machines”. He considers Hiden Intelligence CEO, Aruto, his rival and uses the catchphrase, ‘the day humanity will become an endangered species is near’.

Fukuzoe Jun (Vice President, Hiden Intelligence):
Jun is an an all around good guy but consistently finds himself playing second fiddle to others. After the former Hiden CEO dies, he believes that he will inherit that role but is shocked to discover that the position will pass to Aruto instead. From that day, Jun has viewed Aruto as an obstacle to his becoming CEO and secretly hopes that he will fail. Despite this, Jun takes pride in the success of Hiden Intelligence and works to maintain its prominence.

Koichi Yamadera will serve as the narrator, with Noriko Hidaka providing the voice for the AI system.

Should you be so inclined, you can watch the full press conference here:

Kamen Rider Zero-One will begin on September 1st in Japan.