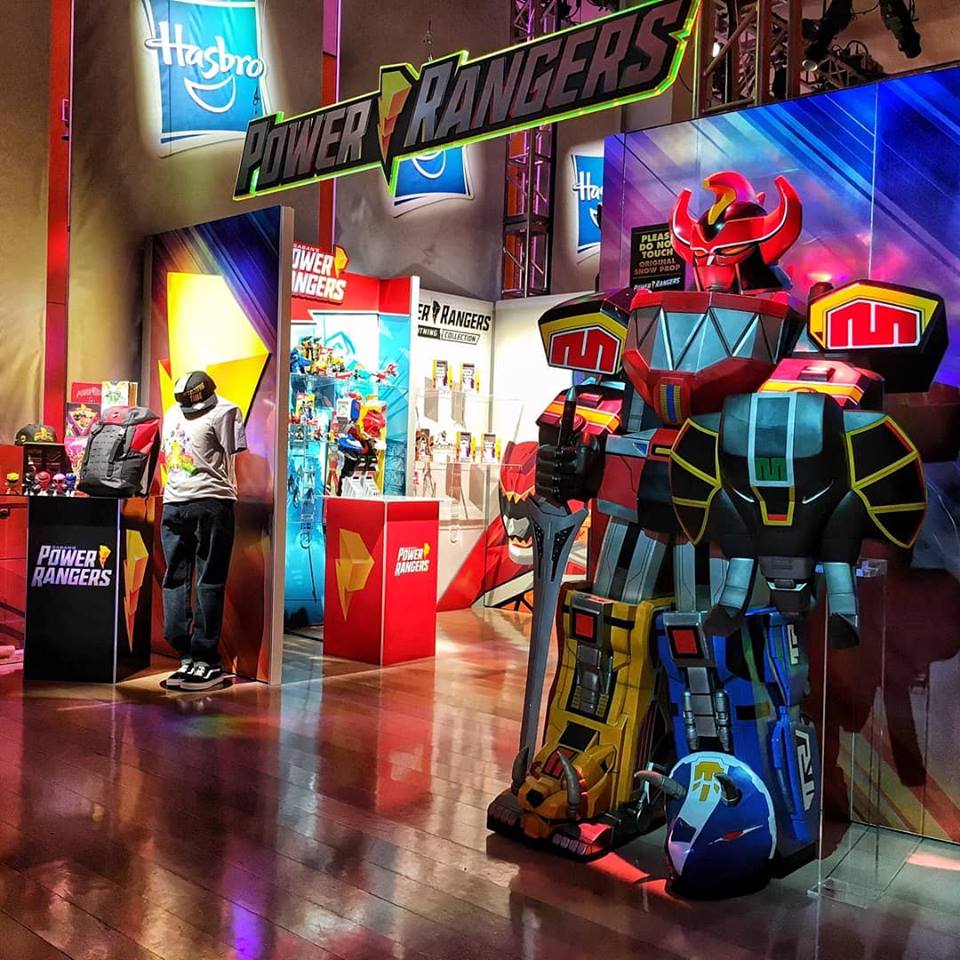 Before it’s even officially open, we have a really good look at Hasbro’s display space at New York Toy Fair 2019!

It’s been a busy few days for fans of Power Rangers. With New York Toy Fair approaching, followers of the brand were excited to find out just what exactly Hasbro had planned for us in their first foray into the Power Rangers universe. We already saw early previews of the Zords and 6″ Figures this week, and the Lightning Collection yesterday, but now there are even more news items to digest, as well as a good look at the toys on display.

Let’s take a look, shall we?

Overnight, the first of the new Lightning Collection figures was made available for preorder in the United States at Hasbro’s new collector hub, Hasbro Pulse. Our first featured Ranger is the Red Ranger from Power Rangers Dino Charge. As you can see from the gallery below, the figure comes bundled with weapons, hands and a swappable head in the likeness of Tyler, played by actor Brennan Mejia. The US retail price is $19.99 and is expected to be £19.99 in the United Kingdom, too.

Inside the display space, we get our first look at… well… everything!

First up, are the 6″ line of action figures from the upcoming Beast Morphers series, which debuts March 2nd in the United States. We had already seen and fallen in love with these figures. In a 6″ scale, they will match up nicely alongside the Lightning Collection and even it’s predecessor, Bandai America’s Legacy line, which only came in at roughly half an inch more in size. At the back of the display, we also get a preview of the packaging. Each figure is bundles with at least one weapon, as well as a key for the Beast Morphers’ Morpher.

Affectionately known as ‘nutcracker’ figures, Hasbro will also produce a small 12″ line of figures for Beast Morphers. The Red and Blue Rangers, as well as Blaze, are available from April, while Silver and Yellow will wait til Autumn for release.

We already knew about the Wild Force Megazord and Red Dragon Thunderzord coming in this line (not pictured here) but that was not all for the Playskool line of toys for smaller children. Playskool Heroes feature Zords are to be produced, starting with reproductions of further mecha from Power Rangers Wild Force and also the dinosaurs of Power Rangers Dino Thunder. Alongside those Zords, Mega Mighties of complimenting Power Rangers will also be released in packs of two.

First revealed late last night, the outside of Hasbro’s Power Rangers space gave us a rare treat in a look at the beautiful Dino Megazord from Mighty Morphin’ Power Rangers. A plaque alongside the Megazord reveals that this is the original prop from the 1993 series but, according to fans and experts on various forums, that isn’t strictly accurate. While the base of this Megazord may indeed stem from the original filming of Zyuranger, the suit had to undergo significant repair to be useable again and, as such, you could argue that so much has been changed that this is not the original suit.

This suit was used by Toei Company in the filming of Tokumei Sentai Go-Busters vs. Kaizoku Sentai Gokaiger: The Movie and later found its way into the, now closed, Toei Hero World Museum. Over on our Facebook page, good friend of Toku Toy Store, Stu Hix, noted the blemishes in the suit that proved it was one and the same from Hero World.

View from the entrance to Hasbro’s display space

Plaque detailing the history of the Megazord

On the other side of the entrance, far left, is a small display of items produced by third-party manufacturers.

That’s it for now! Keep eyes here at Toku Toy Store for further news and updates, as well as the new toys from Hasbro when they become available from April 2019!

What is your favourite new toy reveal? Which items will be coming home to your collection? Join the conversation on our social media pages!