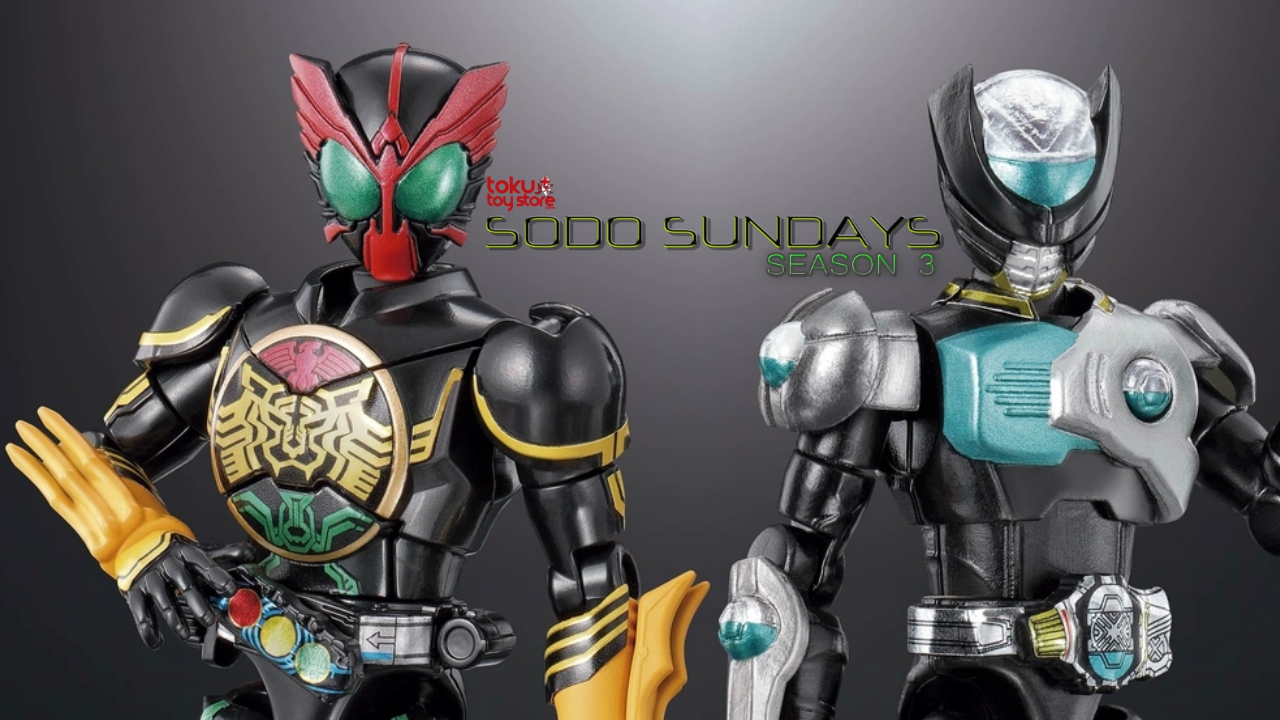 There are a ton of accessories included like the Birth Busters for both Riders and the Birth CLAWs weapons that can also form the Sasori mode. They can be used to create Birth’s Birth Day mode as well.

Also included is a canaster of Cell Metals and the manual for the Birth Rider System.

A small update for the first set of YUDO figures. Extra KirameSwords have been added to the accessories box so that each member of the team can be displayed with a weapon. This is something YUDO hasn’t done the past 2 years in their releases. 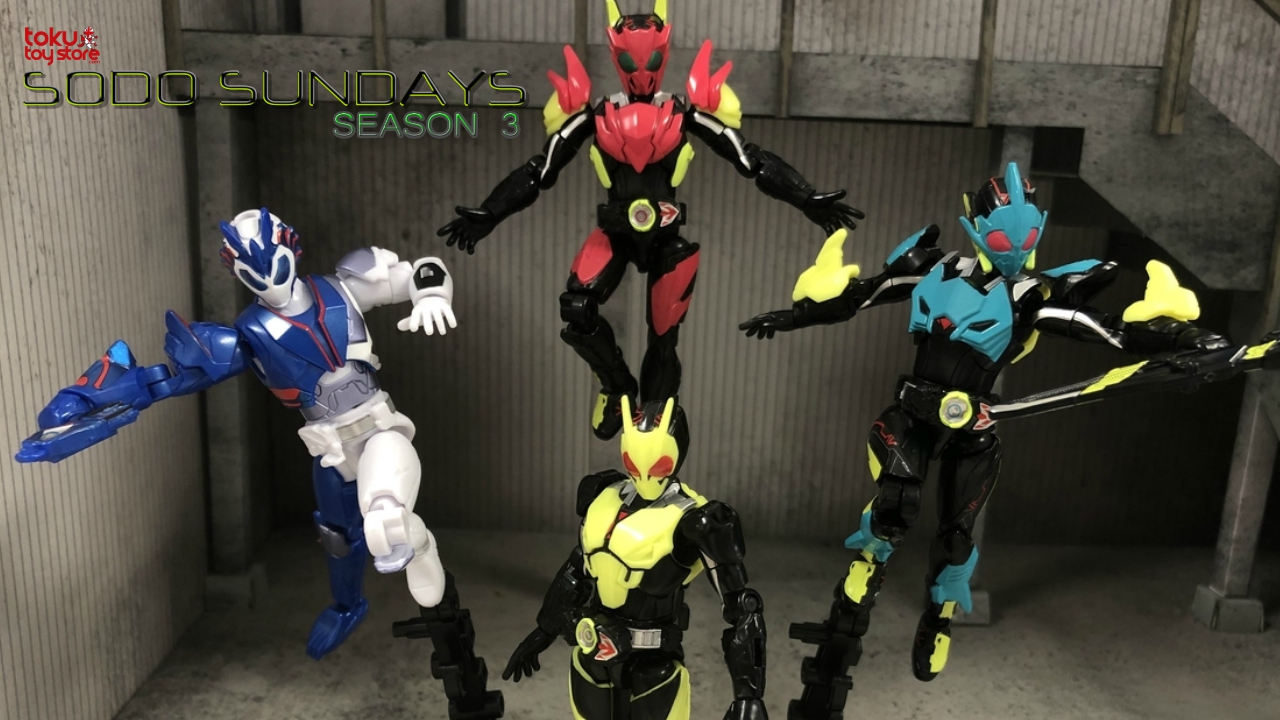 The rest of AI 01 has been revealed! Biting Shark and Flying Falcon will be the last two figures to be featured in AI 01. Continuing the trend from Rising Hopper there is a lot of paint on these two forms with minimal stickers. Shark will come with the Attache Calibur in sword mode while Falcon will come with it in suitcase mode.

There will also be a Complete Set Box that will have just enough extra bodies to give each form an option to be displayed. This set will release on October 28th.

The second Set of Another Riders will be out next month and the showcase on all four figures has begun with Another Den-O. All of the figures in this set will come with optional year stickers to reflect their original appearance or their Another Zi-O II summons.

BiriBiri Geiz will also be getting a figure in the big yearly box set this year that will also come with the DX Ridewatch for the form.

December will bring the third set of YUDO figures for Ryusoulger. Ryusoul Red and Gold will be returning from the older waves. The grunts of the series, the Drunn Soliders. 3 more armors will be included as well: the CosmoRaptor, ShadowRaptor, and PackyGuru armors.

As always, you can watch SODO Sundays Season 3, Episode 3 here: 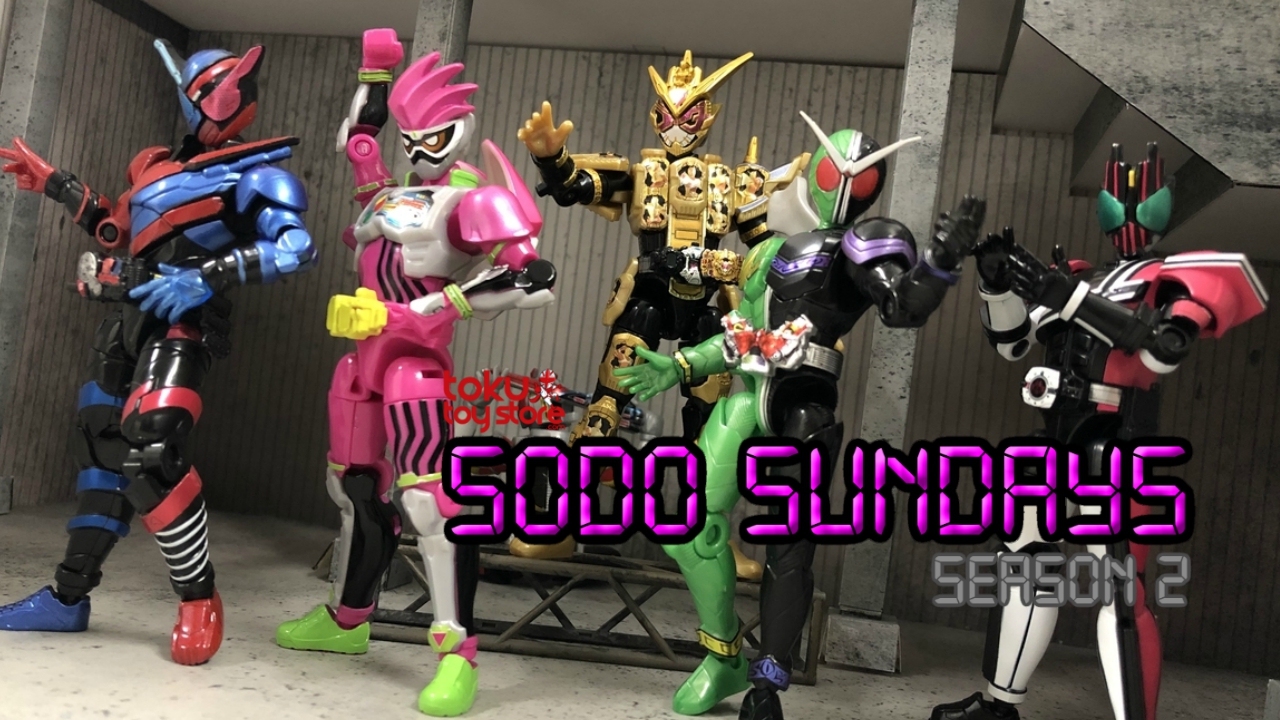 The final figure of July’s Set 10 has revealed! Zi-O’s final form Grand Zi-O is coming to the SODO line. This figure will feature moulded on details for all of the Heisei Rider statues all over the suit but will have stickers in able to make the statues stand out with greater details.

August will see the release of YUDO Set 2. The first figure from this set has been revealed to be RyusoulGold. He will include his Mosa Changer and Mosa Blade. Also included will be the pieces to give him his BiriBiri Armor.

The Kamen Rider Cyclone figure, revealed a while back, got a better focus recently.

As always you can watch SODO Sundays Season 2, Episode 20 here: 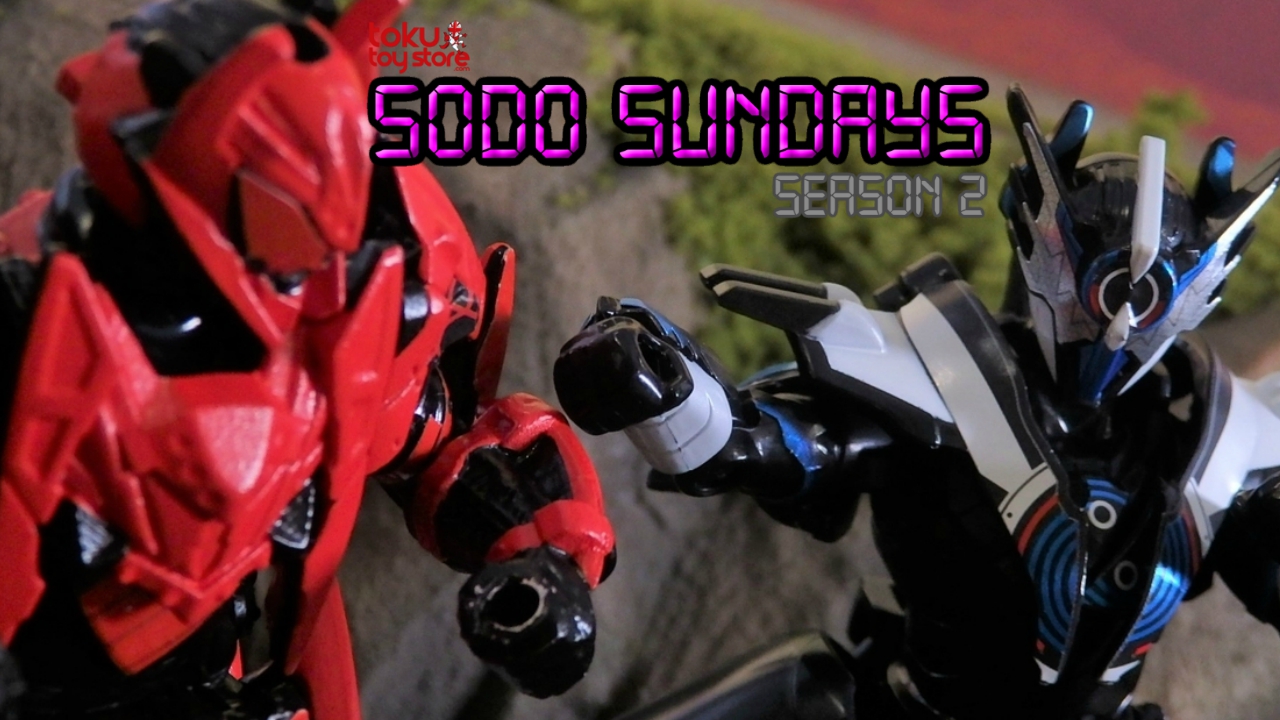 Hello, tokusatsu community! It’s Joshua Perry here to talk about SODO figures on my fortnightly series, SODO Sundays. Today, Build takes over Zi-O as we also have some Ryusoulger and Kamen Rider Den-O news to cover.

The SODO ad from a while ago had already revealed we would be getting a figure of the new Cross-Z form Cross-Z Evol but now it’s been fully revealed. This figure will also come with two accessories: the Pandora Box with the coloured panels on it as well as a new stand extender piece.

Cross-Z Evol is the final entry in Zi-O’s Set 8. But that’s not it for Build…

The villain of the Cross-Z V-Cinema, Kamen Rider Killbus, has been revealed as the first figure for Zi-O Set 9. His figure will also include this stand extender piece as well as a Drill Crusher and Kaizoku Hassha.

Kamen Rider Den-O was revealed a while ago as the next entry in the SODO Chronicle series. Here we have the details. The set will come with a Plat Form base body and four armor sets for the Sword, Rod, Ax, and Gun base forms of Den-O.

Pictures of the new Ryusoulger YUDO figures have been revealed. This set, releasing in May is confirmed to include the main 5 team as well as pieces to plug into the arms for the different soul abilities. Ryusoul Red’s Power Soul is shown off in the pictures.

As always you can watch SODO Sundays Season 2, Episode 15 here: 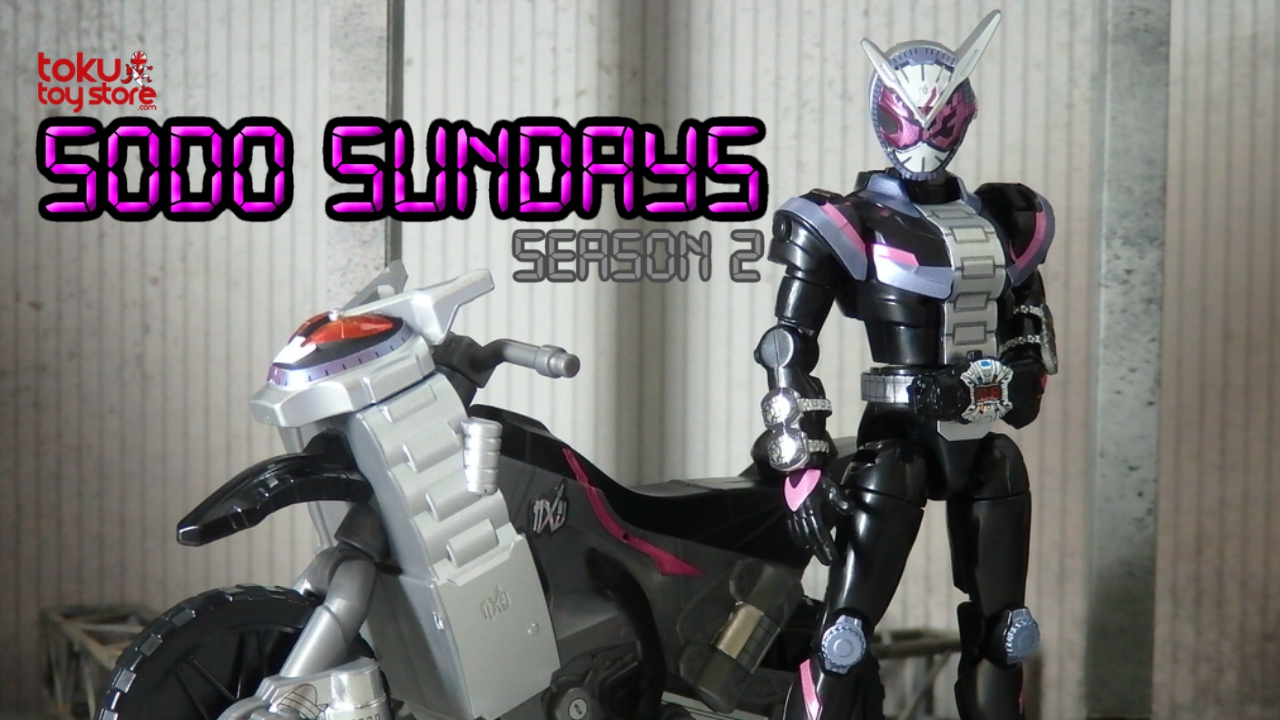 The first figure of Set 6 has been revealed. The Double (W) Armor from Heisei Generations Forever is here! Featuring all the details, like the Gaia Memory shoulder pads, this form is perfect to add to the collection of Heisei Armors. Due to space and previous releases, the Zi-O base body will not be included in this set, just the armor.

The EX Time Mazine Set was also shown off. This set will feature the ability to change the Ridewatch face to be Zi-O, OOO, Ex-Aid, or Build.

As reported before, Zi-O Set 6 will feature SODO Build. The figure to be included in this set will be from Build’s final episode: RabbitDragon! This form will include the Beat Crosser as well as feature painted legs this time around.

Listings have popped up that confirms that YUDO will return for a third year for the new upcoming Sentai, Ryusoulger. A set of the main 5 will release in May.

As always you can watch SODO Sundays Season 2, Episode 10 here:

Hello, tokusatsu community! Joshua Perry here to talk about SODO figures on my fortnightly series, SODO Sundays. This time we have some news from the Kamen Rider Build along with YUDO news for Lupinranger vs Patoranger.

The next figure for Build Set 9 has been revealed! The new form Cross-Z Magma is joining the line. This figure comes with his Magma Knuckle weapon as well as a stand like usual.

At the end of April, the Build Guardians Set will be released. Back when it was first announced, the Seito versions of the Guardians had not yet shown up in the series but the set has been revealed that there are stickers included for a Seito Guardian.

That’s not it for Build villains though as a special Build Set will be released in August featuring more Build villains. So far revealed to be in the set but no figure pictures yet are the Hard Guardians from the show and the Bi-Kaiser from Heisei Generations FINAL.

Exciting to see what else will be revealed in that set in the coming months.

As the first set of YUDO figures releases for Lupinranger vs Patoranger a prototype for a future figure in another set has been revealed as the grunts known as the Portermen. It’s unknown when this figure will be released.

A special feature of the YUDO has been shown as the figures can hold parts of the Minipla Mecha as weapons like in the show.

As always you can watch SODO Sundays Episode 17 here:

That’s it for this edition of SODO Sundays! The next edition will release on May 6th on both Toku Toy Store News and YouTube channel. 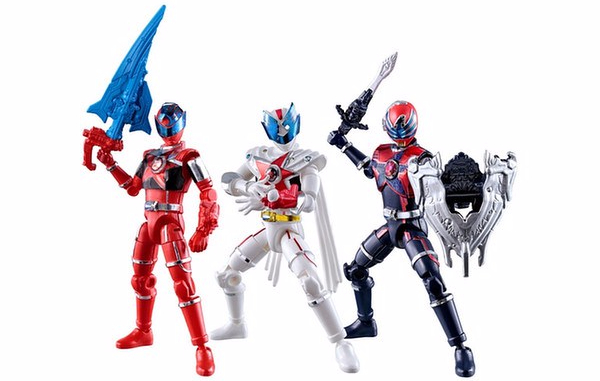 A number of weeks ago, we reported that a new range of articulated action figures were coming, based on Shishi Red from Uchu Sentai Kyuranger. Initially thought to be the return of Super Sentai S.H. Figuarts, it quickly emerged that these figures were in fact Shokugan (SG) Candy Toy releases, similar to the recently produced Kamen Rider Ex-Aid SODO figures.

Bandai Japan have now released more information about these figures. In this first wave, the figures for Shishi Red, Houou Soldier and Shishi Red Orion will be released. The figures stand at approximately 11cm/4in tall.

The Uchu Sentai Kyuranger YUDO Figures will be released in December 2017 and will be available at Toku Toy Store. Will you be picking them up?